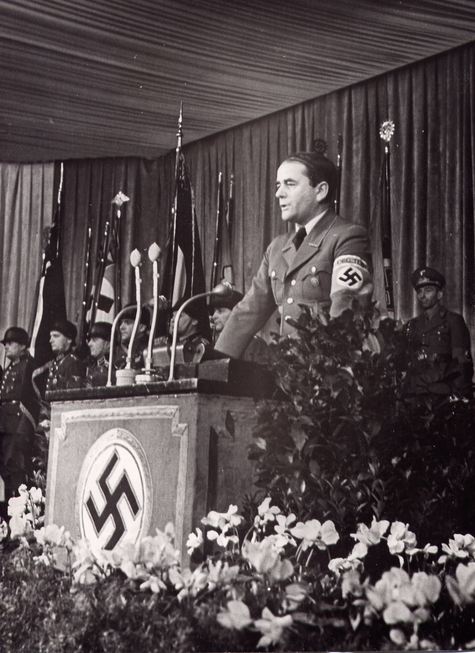 Berthold Konrad Hermann Albert Speer (b. 19 March 1905 in Mannheim, Grand Duchy of Baden, German Empire; d. 1 September 1981 in London, England) was a German architect and politician. He was Hitler's master-builder (Baumeister) and later, during the war and as Fritz Todt's successor, Reich Minister for Armaments and Ammunition (Reichsminister für Bewaffnung und Munition). 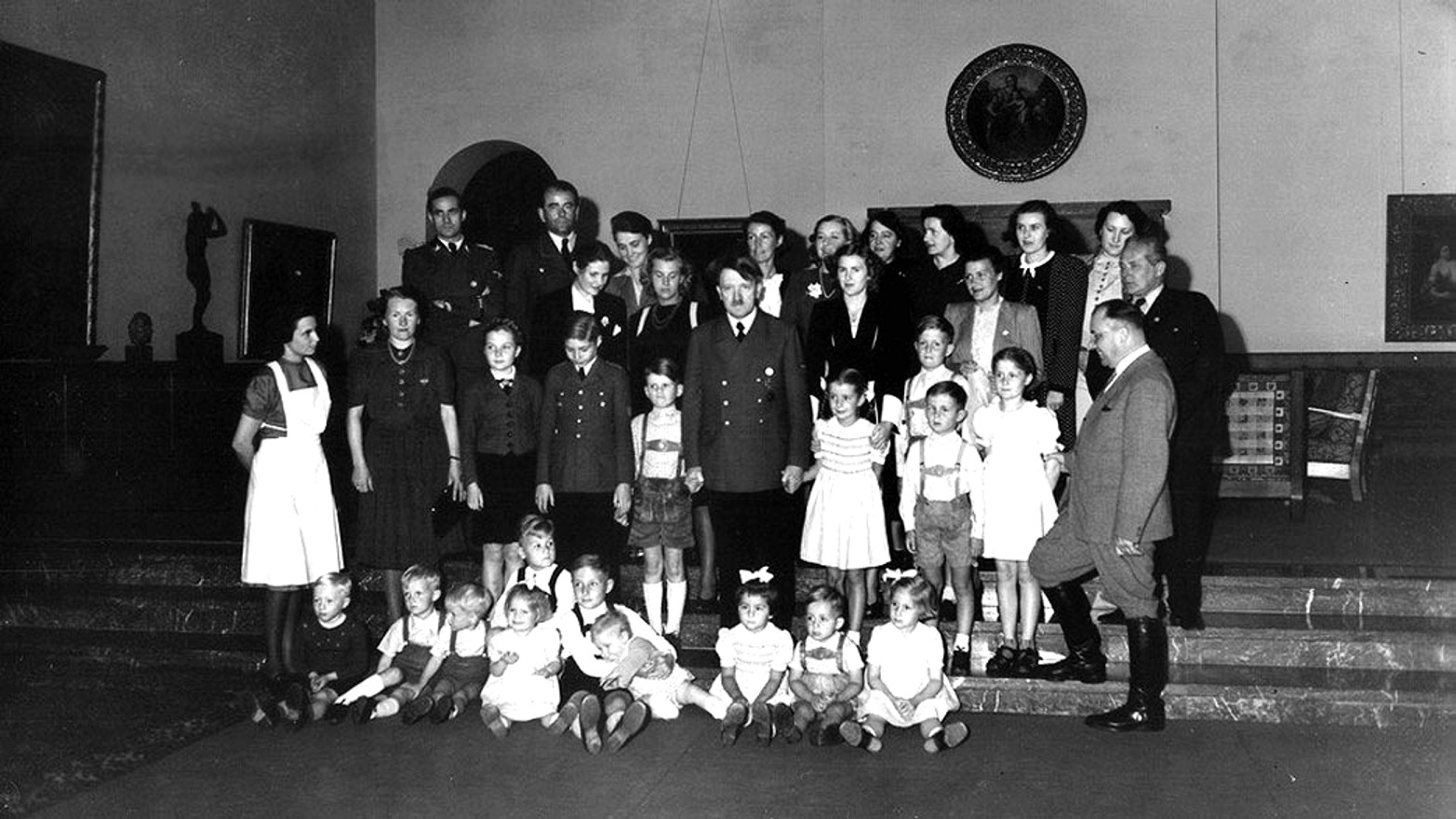 The families of Martin Bormann and Albert Speer as guests of Adolf Hitler in the "great hall" (Große Halle) of the Berghof. 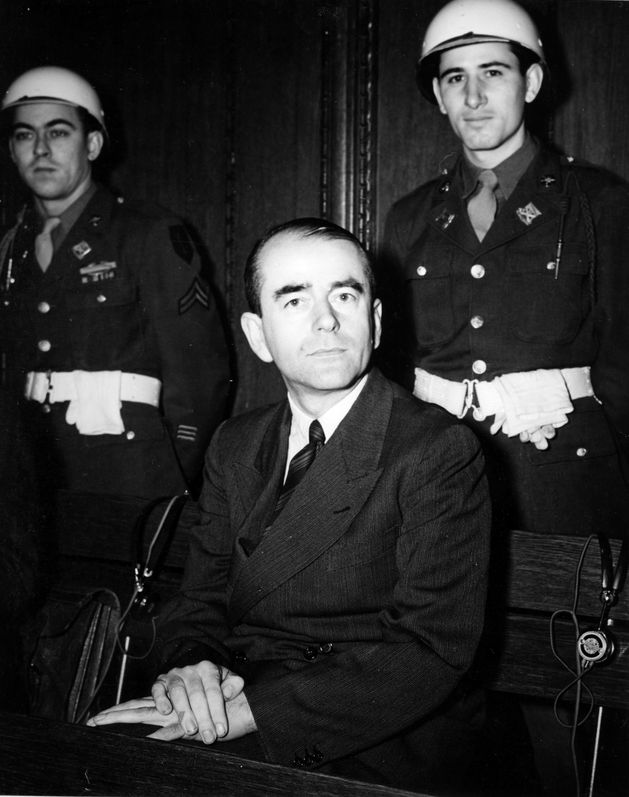 Albert Speer and his wife Margarete at a press conference in Hotel Gerhus in Berlin, 1966 (left); Speer at home (right).

During his time as minister, an "armaments miracle" occurred in which German war production dramatically increased for a time, despite the Allied bombings. After the war, he was tried at the Nuremberg show trials and sentenced to 20 years' imprisonment.[1] Speer was released in 1966. He used his writings from the time of imprisonment as the basis for two autobiographical books, Inside the Third Reich and Spandau: The Secret Diaries.

Speer's books were a success; the public was fascinated by a supposedly inside view of National Socialist Germany. He also carried out a considerable number of television interviews in Germany, and in London, where he died from a stroke in 1981. Little remains of his great architectural work.

Speer and the Holocaust

Speer's defense during the Nuremberg show trials regarding the Holocaust was essentially the same as that of many other accused National Socialists, the legal strategy of acknowledging the Holocaust while attempting to shift blame, which Holocaust revisionists argue was the only legal strategy having some small chance of success, since outright rejection of the Holocaust story was a political impossibility for the Allies. Speer thus argued that he had been unaware of the Holocaust, but accepted general responsibility for the National Socialist regime's actions. In the case of Speer, the defense was relatively successful, since he avoided the death penalty, but was sentenced to 20 years imprisonment for other alleged crimes.

The revisionist Mark Weber has stated that

"Speer’s position was remarkable because, if a wartime policy to exterminate the Jews had actually existed, almost no one would have been in a better position to have known about it. As Reich Armaments Minister, he was responsible for the continental mobilization of all available resources, including critically-needed Jewish workers. That millions of Jews could have been killed at a wartime industrial center as important as Auschwitz and elsewhere without Speer’s knowledge simply defies belief."[2]

The revisionist David Irving has stated that

"Albert Speer's Inside the Third Reich made him a personal fortune after the West Berlin firm of Propyläen published the book in 1969. They earned him wide respect for his disavowal of Hitler. But some critics were puzzled that the American edition differed substantially from the German original Erinnerungen and the British edition. In fact I learned the truth from the horse's mouth, being one of the first writers to interview Speer after his release from Spandau prison in 1966. The former Reichsminister spent an afternoon reading out loud to me from his draft memoirs. The book subsequently published was very different, having been written, he explained, by my own in-house editor at the Ullstein publishing house (Annette Engel geb. Etienne), by their chief editor Wolf-Jobst Siedler, and by historian Joachim Fest, editor of the prestigious Frankfurter Allgemeine Zeitung. Miss Etienne confirmed this. When I challenged Speer in private at a Frankfurt publishing dinner in October 1979 to publish his original memoirs, he replied rather wistfully that he wished he could: "But it would be impossible. That manuscript was quite out of keeping with the modern nuances. Even the captions to the chapters would have caused difficulties." A courageous Berlin author, Matthias Schmidt, later published a book exposing the Speer legend and the "memoirs"; but it is the latter volume which the lazy gentlemen of my profession have in their libraries, not Schmidt's, thus proving the opening words of this introduction true. It was symptomatic of Speer's truthfulness to history that while he was in Spandau he paid for the entire wartime diaries of his office (Dienststelle) to be retyped omitting the more unfortunate passages, and donated these faked documents to the Bundesarchiv in Koblenz. My comparison of the 1943 volume, housed in the original in British Cabinet Office archives, with the Bundesarchiv copy made this plain, and Matthias Schmidt also reveals the forgery. In fact I have been startled by the number of such "diaries" which close scrutiny proves to have been faked or tampered with-invariably to Hitler's disadvantage."[3]

Speer was born in Mannheim, into an upper-middle-class family. He was the second of three sons of Albert Friedrich Speer and his wife Luise Máthilde Wilhelmine, née Hommel.

In mid-1922, Speer began courting Margarete "Margret" Weber (1905–1987), the daughter of a successful craftsman who employed 50 workers. The two married in Berlin on 28 August 1928. The couple would have six children together, born between 1934 and 1942: Albert, Hilde, Margarete, Arnold, Fritz and Ernst.