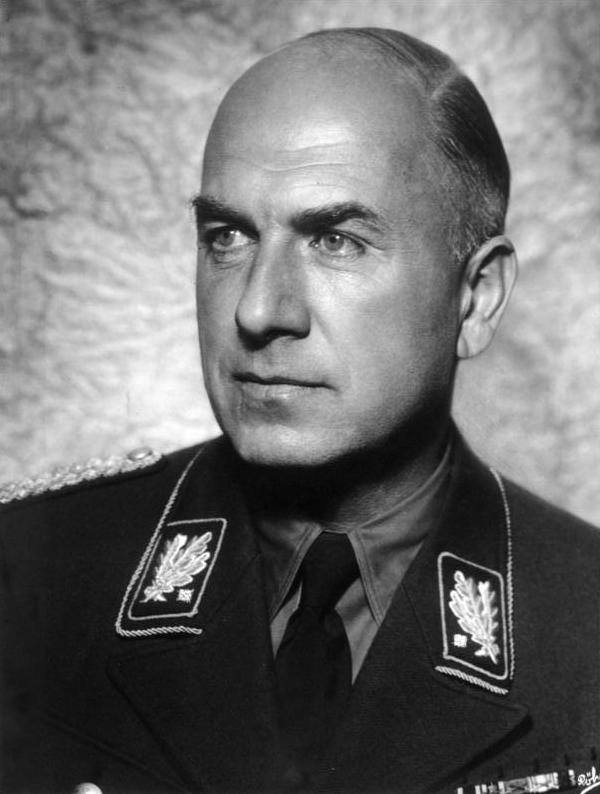 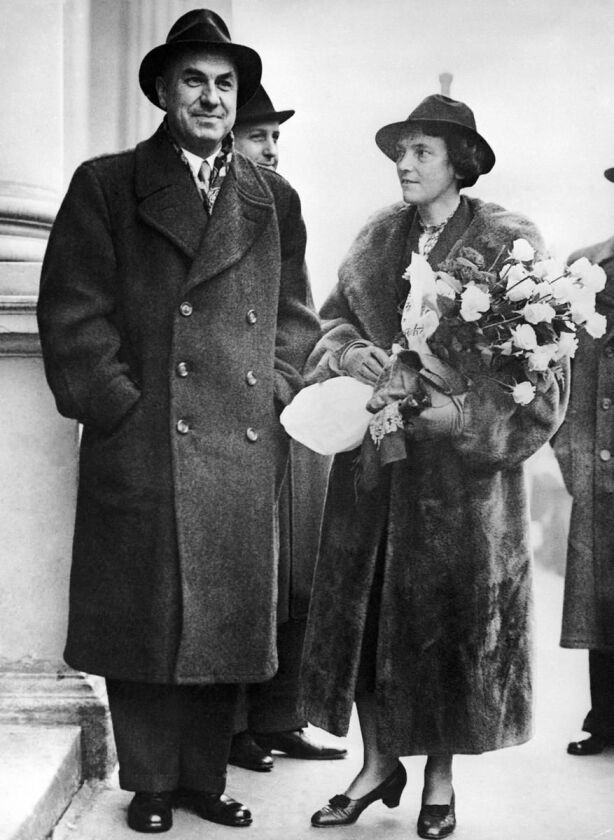 Inspector General of the German highways, Dr. Fritz Todt and his wife pose on 17 November 1937 in front of the German embassy in London, United Kingdom. 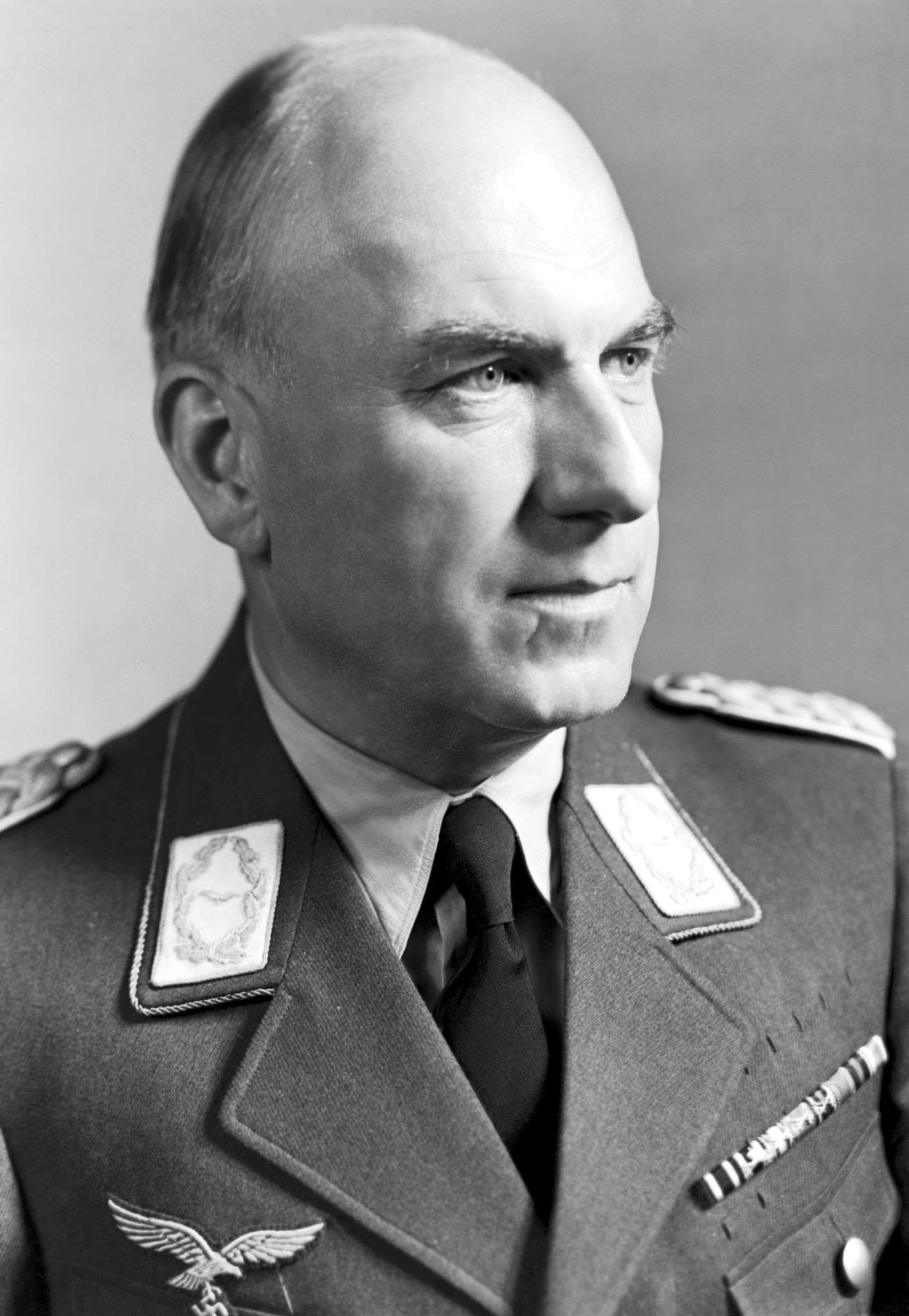 Generalmajor of the Luftwaffe Todt 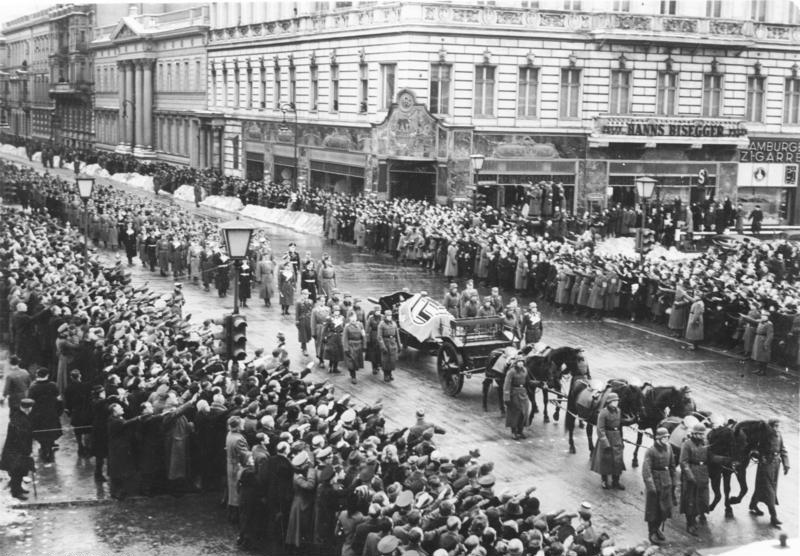 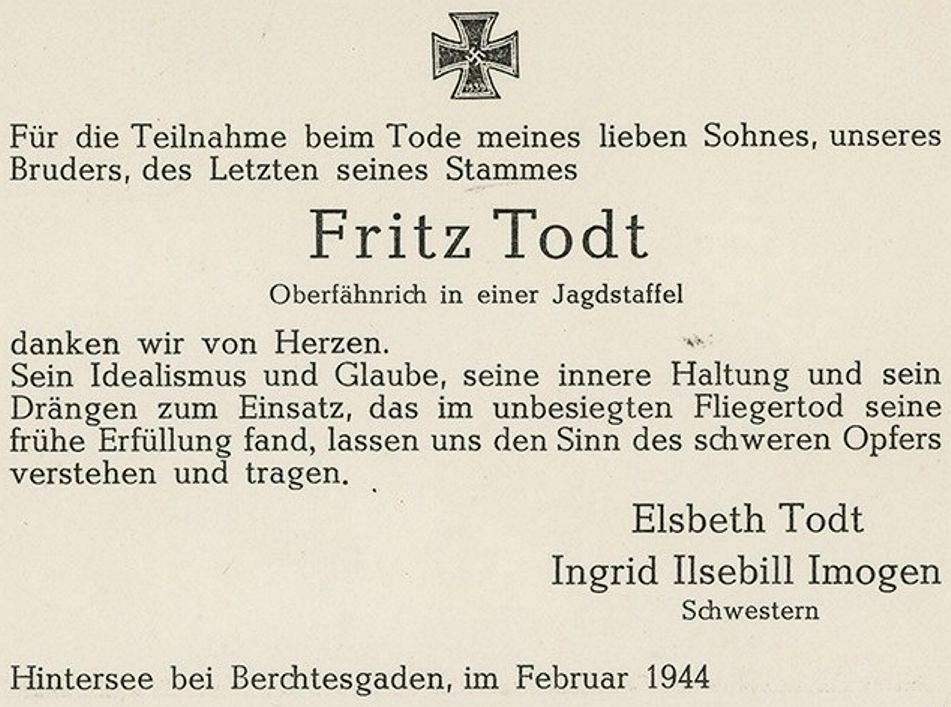 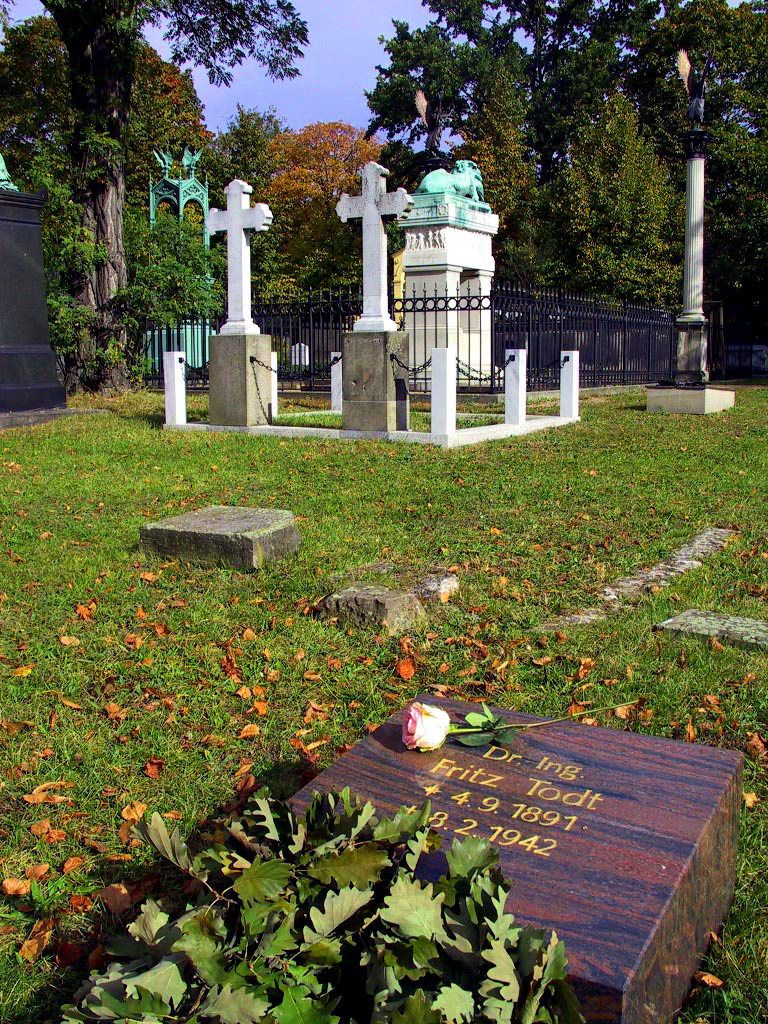 Dr. Todt's grave; in the background the grave of Generalleutnant Gerhard von Scharnhorst (1755–1813). 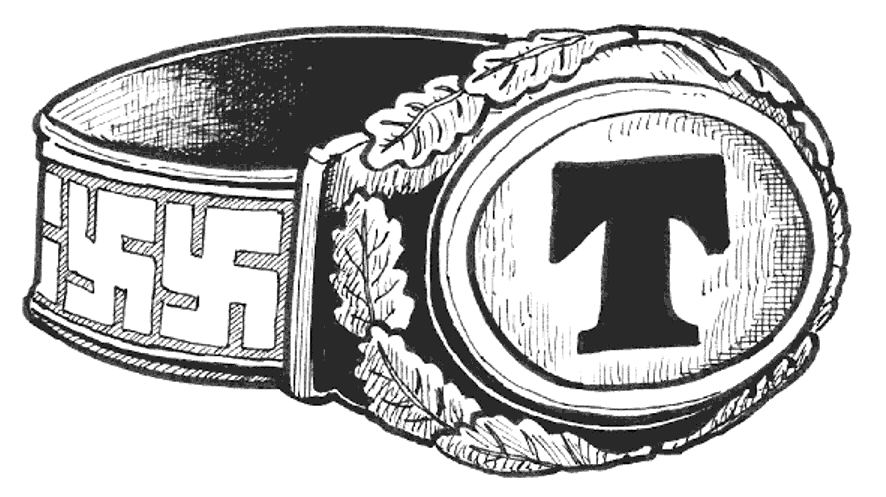 Fritz-Todt-Ring; it was established by the Nationalsozialistische Bund Deutscher Technik (NSBDT) and awarded to Albert Speer, Julius Dorpmüller (de) and Wilhelm Ohnesorge (de), both nominated from Prof. Dipl.-Ing. Speer. 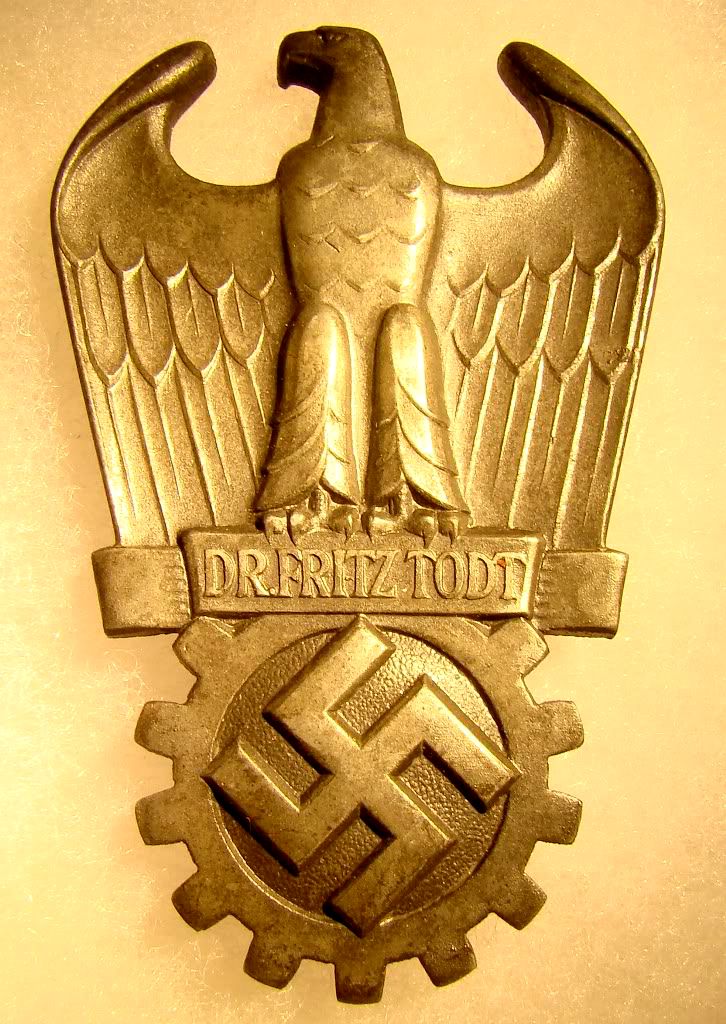 Dr.-Fritz-Todt-Preis in Gold; established on 12 November 1943 by Adolf Hitler to award exceptional achievements through scientists, inventors and engineers of the Organisation Todt.

Todt was born in Pforzheim, to a father who owned a factory. He studied engineering in Karlsruhe and the School for Advanced Technical Studies at the Technical University of Munich.

In World War I, he initially served with the field artillery, shortly afterwards with the infantry, and then as an observer with the Imperial German Air Service, winning the Iron Cross. After his military service, he finished his studies in 1920 and joined the civil engineering company Sager & Woerner.

He joined the Nationalsozialistische Deutsche Arbeiterpartei (NSDAP) on 5 January 1922. In 1931, he became an Oberführer (a rank equivalent to senior Colonel) in the Sturmabteilung (S.A.), which was then commanded by Ernst Röhm: that year, Todt also completed his doctorate (on "Fehlerquellen beim Bau von Landstraßendecken aus Teer und Asphalt" - "Sources of defects in the construction of tarmac and asphalt road surfaces").

Following the appointment of Hitler as Reichskanzler on January 30, 1933, Todt became (in July) Generalinspektor für das deutsche Straßenwesen ("Inspector General for German Roadways") and was involved in the new construction company for the motorways (Reichsautobahnen). He later became Leiter des Hauptamts für Technik in der Reichsleitung der NSDAP ("Director of the Head Office for Engineering in the Administration of the Reich of the NSDAP") and Generalbevollmächtigter für die Regelung der Bauwirtschaft ("General Commissioner for the Regulation of the Construction Industry"). As a special privilege, Todt was permitted to have considerable power and was not necessarily immediately answerable to any of the Reich ministries. He was also appointed to the rank of Generalmajor of the Luftwaffe after its official promulgation in March 1935.

In 1938, he founded the Organisation Todt (OT), joining together government firms, private companies and the Reichsarbeitsdienst (Reich Labor Service), for the construction of the "West Wall", later renamed the "Siegfried Line", for the defence of the Reich territory. On March 17,1940, he was appointed Reichsminister für Bewaffnung und Munition ("Reich Minister for Armaments and Munitions") and oversaw the work of Organisation Todt in the occupied west. After the invasion of the Soviet Union in June 1941, he was appointed to manage the restoration of the infrastructure.

In 1941, he became increasingly distant from the commanders of the Wehrmacht and from Reichsmarschall Hermann Göring, the Oberbefehlshaber der Luftwaffe (Commander-in-chief of the Luftwaffe) in particular. He did remain close to Hitler at this time, yet, after an inspection tour of the Eastern Front, he complained to him that, without better equipment and supplies for the armed forces, it would be better to end the war with the USSR. Inevitably, Hitler rejected such an assessment of the situation and carried on the offensive against the Soviet Union.

On February 8, 1942, while flying away from the conclusion of a meeting with Hitler at the Wolfsschanze ("Wolf's Lair") at Rastenburg, his aircraft exploded and crashed. He was succeeded as Reichsminister by Albert Speer, who had narrowly missed being on the same aircraft. [1]He was buried in the Invalidenfriedhof, located in the Scharnhorst-Strasse in Berlin and became the first holder, albeit posthumously, of the Deutscher Orden ("German Order"). It was even suggested that Todt was the victim of an assassination plot, but this has never been confirmed.

Hitler’s eulogy (complete original in German) to Dr.-Ing. Todt, delivered in the Mosaik-Saal of the Reich Chancellery (Reichskanzlei) in Berlin on 12 February 1942:

Revered mourners! Dear Frau Todt! It is very difficult for me to honor a man whose deeds speak more clearly and more impressively for him than words ever could. When we received the terrible news of the tragedy in which our dear party comrade Dr. Todt had become a victim of, many millions of Germans surely had the same sensation of that emptiness which always occurs, when an irreplaceable man is taken from his fellow men. However, the whole German nation knows that the death of this man means an irreplaceable loss for us. It is not only the creative personality which was taken from us, but it is also the loyal man and unforgettable comrade, whose departure touches us so deeply. Dr. Todt was a National Socialist. He was that not only intellectually from the moment since he had learned about the movement for the first time, but also with his whole heart. The first contact with the Party in the year 1922, the first encounter with me personally had not only drawn this man inwardly to me, but also bound him outwardly to adhere to what he envisioned as the only possibility for a German renaissance [...] When Dr. Todt first threw himself whole-heartedly into our movement, he was 31 years old. Behind him was a life which included an education from grade school to college of liberal arts. [...] From 1911 to August 1914, he studied again, as a graduate civil engineer at the School for Advanced Technical Studies in Munich and in Karlsruhe. As early as 1913 he passed his first preliminary examination at School for Advanced Technical Studies in Munich. At the outbreak of war he joined the 14th regiment of field artillery and first saw action on the Western Front. In October 1914, he was named Lieutenant of the Reserve and assigned to the 110th Regiment. With this outfit he fought up to January, 1916. Then he joined the air force, became an aerial observer, and was finally leader of an independent flight squadron up to war's end on the Western Front. He was also wounded in an air battle. In 1919 he completes his studies and in the winter of 1920 passes his final examination at the School for Advanced Technical Studies in Munich. It is interesting to note that the subject of his doctor's thesis at the School for Advanced Technical Studies in Munich is the following: “Disadvantages of Highway Construction using Tar and Asphalt.” [...] The German Reichautobahnen are, in the planning of their layout and the execution, the work of this quite unique technical- and in addition, also artistic- talent. We can no longer think of the German Reich without these roads. In the future also they will find their continuation as natural great communication lines in the whole European transportation region. But what has in addition been done in Germany in this same time in the broadening and improvement of roads, in the elimination of bad curves, in the construction of bridges is so incomprehensible in its scope, that only an exhaustive study will permit a comprehensive and just conception of the accomplishment in its entirety.

All of you, my dear party comrades, will still remember those impressive minutes, during which our Road Construction Inspector in Chief, Dr. Todt, at the Reichsparteitag in Nuremberg, demonstrated briefly and clearly how his task came into being, and how it began to grow far beyond the scope of any previous construction problems anywhere in the world. It was therefore only a matter of course, that this man was finally made chief administrator in all fields of construction. Thus, it was only natural that this man was appointed chief administrator, first, for the regulation of all construction, and that then, in the Four Year Plan, he was given a special position as Inspector General for special projects [...] I had conceived the plan of erecting a fortification opposite the Maginot Line, but from different points of view, which was to protect the vitally important western portion of the Reich against any attack, under any circumstances, [...] When, on 28 May 1938, I made known my resolve to the army and the air force, I entrusted the Inspector General for Construction, Dr. Todt, at the same time with the responsibility and supervision of the construction of the largest part by far of this gigantic new work, in cooperation with the proper military authorities, with the provision that as early as September, 1938, at the latest, at least 5,000 concrete and steel positions would have to be ready or usable. The present war experiences have confirmed our conviction, that no power in the world could succeed in breaking through this most gigantic defense zone of all time. This marvel is, in its technical plan of construction, in the purely organizational measures of its construction, as well as in the technical building itself for all time associated with the name of Dr. Todt. [...] Much of what the man has done can be made known to the German people or brought to the amazed attention of the world, only after the war. What this man has created is so unique that we all can not thank him enough for it. [...] When under the fire of enemy guns the West Wall was completed, while in Poland the columns of the Organisation Todt for the first time joined the advancing armies and gave them assured supply lines, I had it in my mind to award him the Knight's Cross of the Iron Cross, as one of the leading creators of German resistance and of the German will for self-assertion in the war. However, I changed my mind. Because this distinction, famous though it is, could never have done justice to the importance of this unique man. I had already made the decision some time previously to establish such a decoration, which, founded on the principles of our movement, is to honor, in several classes, the most valuable services that a German can perform for his people. After the conclusion of the campaign against France, I said to Dr. Todt that I proposed for him some day, as God wills, the recognition of his unique service, that he will be the first to whom I shall award the highest class of the order. In his modesty at that time he did not want to know anything about it. As now the National Order for Art and Science was awarded first to Dr. Todt – no, to the deceased Prof. Troost – so now today I confer for the first time, in the name of the German people and its National Socialist movement, the new order on our dear and unforgettable party comrade, Dr. Todt, the general inspector of our roads and builder of the West Wall, the organizer of armaments and munitions in the greatest battle of our people for their freedom and their future. I myself can add only a few words for myself. I have lost in this man one of my most faithful collaborators and friends. I regard his death as a contribution to the National Socialist movement, to the freedom fight of our people.

Fritz was the son and only child of the ring and jewelery manufacturer Emil Todt and his wife Elise, née Unterecker.

In June 1921, Todt married his older fiancée Elsbeth, widowed Kramer, née Müller (b. 7. September 1883 in Coburg). They had three daughters (Ingrid, Ilsebill and Imogen) and son Fritz (b. 2. März 1924), who was killed on 11 February 1944 as Oberfähnrich (officer candidate) and Luftwaffe fighter pilot (Jagdflieger).

Frau Elsbeth Todt, widow of Fritz Todt, was convicted of being an "activist and beneficiary" on 1 September 1947 by a Berchtesgaden denazification tribunal (Entnazifizierung). She was sentenced to two years at whatever special work the Labor Office might decide. The court ordered confiscation of all but 10,000 marks ($1,000) of her property estimated to be worth $33,000.

Elsbeth Todt died on 24 January 1986 102 years old and was buried in the cemetery Bergfriedhof in Schönau am Königssee (Bavaria). Here her beloved son also rests and the name of her husband is also listed on the tombstone in rememberance.