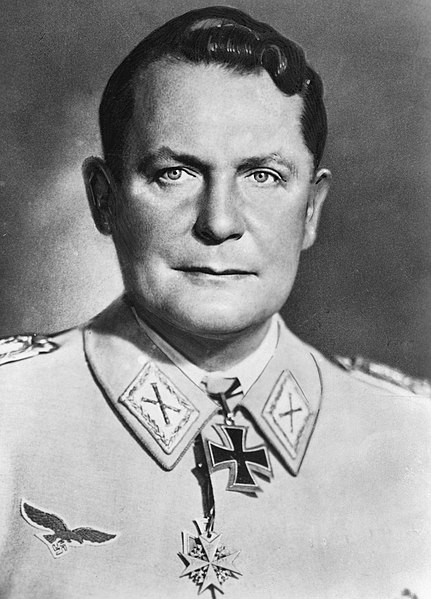 Hermann Wilhelm Göring (12 January 1893 – 15 October 1946) was a World War I fighter pilot ace, a leading member of the NSDAP, and a commander-in-chief of the Luftwaffe. By 1940, he was at the peak of his power and influence; as minister in charge of the "Four Year Plan", he was responsible for much of the functioning of the German economy in the build-up to World War II. Hitler promoted him to the rank of Reichsmarschall, a rank senior to all other Wehrmacht commanders, and in 1941 Hitler designated him as his successor and deputy in all his offices. However, he lost influence during the later stages of the war. After the war, he was the most prominent defendant at the International Military Tribunal. He was executed in 1946.

Göring and the Holocaust

The revisionist Arthur Butz has written on the International Military Tribunal (IMT) that "with the exception of Kaltenbrunner and perhaps one or two others, these high ranking German officials did not understand the catastrophic conditions in the camps that accompanied the German collapse, and which were the cause of the scenes that were exploited by the Allied propaganda as "proof" of exterminations. This may appear at first a peculiar claim, but consultation of Gilbert's book shows it to be unquestionably a valid one (the only other possibility is that some merely pretended to misunderstand the situation). The administration of the camps was far removed from the official domains of almost all of the defendants and they had been subjected to the familiar propaganda since the German surrender. To the extent that they accepted, or pretended to accept, that there had been mass murders, for which Hitler and Himmler were responsible, they were basing their view precisely on the scenes found in the German camps at the end of the war, which they evidently misunderstood or pretended to misunderstand. [...]

Speer also passes along Göring's private remark just before the IMT trial about Jewish "survivors" in Hungary: "So, there are still some there? I thought we had knocked off all of them. Somebody slipped up again." Such a sarcastic crack was understandable under the circumstances, because Göring never conceded the reality of any extermination program and insisted that he had known only of a program of emigration and evacuation of Jews from the German sphere in Europe. [...]

Unlike the other defendants, Göring assumed throughout the trial that he was to be sentenced to death, and his testimony appears to be the approximate truth as he saw it. Although he never conceded the existence of a program of extermination of Jews, we have seen that he misunderstood what had happened in the German camps at the end of the war and assumed that Himmler had, indeed, engaged in mass murder in this connection. However, he never conceded any number of murders approaching six millions."[1]

Göring was at the IMT alleged to have ordered Reinhard Heydrich to implement the Holocaust on 31 July 1941.

Thus, on 31 July 1941, a directive signed by Göring stated to Heydrich that "As supplement to the directive already given to you by the edict of Jan. 14, 1939, to solve the Jewish question through emigration or evacuation in a most favorable way according to the prevailing conditions, I hereby instruct you to make all necessary organizational and material preparations for an overall solution to the Jewish question in the German sphere of influence in Europe. Insofar as the responsibilities of other authorities are affected, they are to be involved. I further instruct you to promptly provide me with an overall conceptual plan regarding the organizational and material requirements for carrying out the desired final solution to the Jewish question.”[2]

The IMT and many other non-revisionists have argued that the "final solution" referred to in the directive was a new policy of extermination, ultimately ordered by Hitler. See Holocaust intentionalism and Holocaust functionalism‎ on more recent mainstream "Holocaust functionalism" views implying that Göring was falsely convicted for this at the IMT, since "functionalists" now allege that Hitler made the decision to kill all Jews at a later date (or not at all).

See World War II statements argued to support Holocaust revisionism on general Holocaust revisionist views on the events before and after this directive. For example, the phrase "final solution" had been used before the 31 July 1941 directive and in contexts where it was clearly not a "code word" for genocide.

Revisionists have argued that there is no mention of a new extermination policy and that "To the contrary: Governmental policy from Jan. 14, 1939, until the summer of 1941 was in fact directed towards emigration and deportation. Heydrich’s original mission was not superseded by his new directive but rather “supplemented,” that is to say, expanded territorially. In 1939 his activities had been restricted to the Reich, but after the summer of 1941 they were extended to nearly all of Europe. This is exactly what the Göring directive prescribes: develop an expanded plan that provides for emigration and evacuation of all the Jews from the German sphere of influence in Europe."[2]

Another revisionist view, "This document is in full conformity with the Madagascar Plan. The instructions from Göring issued as “[s]upplementary” to those already given to Heydrich in the order of January 14, 1939, in fact consisted exclusively in the accomplishment of the solution of the Jewish problem “in the form of emigration or evacuation” of the Jews from the Reich, while at the same time a territorial ‘final solution’ for all Jews in the German-occupied European nations, by means of forced resettlement to Madagascar, was the aim. Precisely because it included all Jews of the occupied European nations, this solution was designated as the “Gesamtlösung” (complete solution). By virtue of the fact that Heydrich wrote on November 6, 1941, that he had already been charged for years with the preparation for the ‘final solution’ in Europe, he himself was clearly referring to the task assigned to him by the order of January 14, 1939, and identified the ‘final solution’ with the “solution in form of an emigration or evacuation,” which Göring had specified as the goal in the letter of July 31, 1941. In the same context belongs an order, which was transmitted to the Foreign Office by Adolf Eichmann on August 28, 1941, and which prohibited “an emigration of Jews out of the territories occupied by us, in consideration of the final solution of the issue of European Jews, which is in preparation and is approaching.”"[3]

Also, Göring testified that he had never read the document. Göring's diary indicated that he spent only 10 minutes with Heydrich. Göring also signed other documents. Heydrich is argued to have had the document prepared on a letterhead, which Heydrich himself had typed. This is argued to indicate that it was one of several documents quickly signed by Göring, without reading them in detail, making no lasting impression on Göring, and that it thus could not have been part of a dramatically new policy ordered by Göring and other top German leaders. The document has been argued to have been a bureaucratic convenience for Heydrich, since he could refer to it and state he was acting on the authority of Göring and the very influential Four-year plan Göring was in charge of. Heydrich referred to this document when calling for the Wannsee conference.[4]

It was clear from the outset that a death sentence would be pronounced against me, as I have always regarded the trial as a purely political act by the victors, but I wanted to see this trial through for my people's sake and I did at least expect that I should not be denied a soldier's death. Before God, my country, and my conscience I feel myself free of the blame that an enemy tribunal has attached to me.
—Herman Göring.[5]

Part of this article consists of modified text from Wikipedia, and the article is therefore licensed under GFDL.
Retrieved from "http://en.metapedia.org/m/index.php?title=Hermann_Göring&oldid=453305"
Categories: