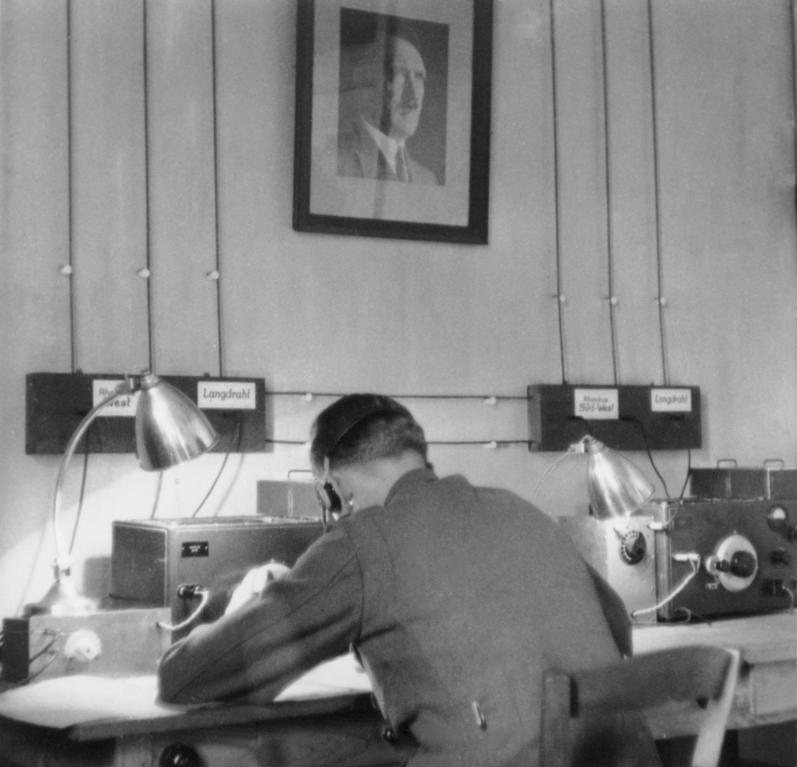 The Abwehr (English: defence or protection was the German military intelligence service from 1920 to 1945. From 1935 to 1944, Wilhelm Canaris led the organization. At some point he became a member of the so-called German resistance, sabotaging Germany's foreign policy and war effort, providing the Allies with information, and providing important support for internal resistance against the government leading up to the insurgency “Operation Valkyrie” (German: Unternehmen „Walküre“. This has been argued to have been an important cause of Germany losing the war. Deputy head Hans Oster and other Abwehr personnel were also part of this putschist movement. 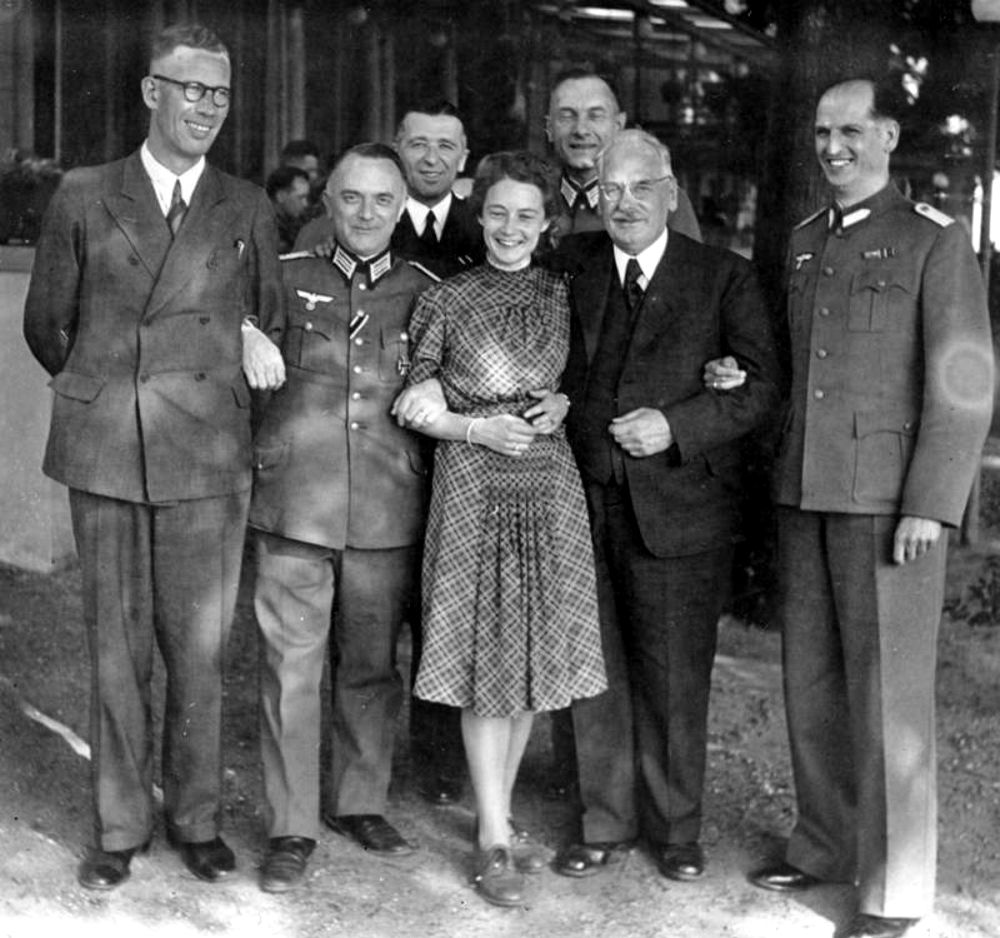 Members of the secret telecommunication service of the Abwehr, 1939; among them two officers, a professor and a to the right a Sonderführer (special leader), a specialist role introduced in the Wehrmacht in 1937 for the mobilization plan of the German armed forces. 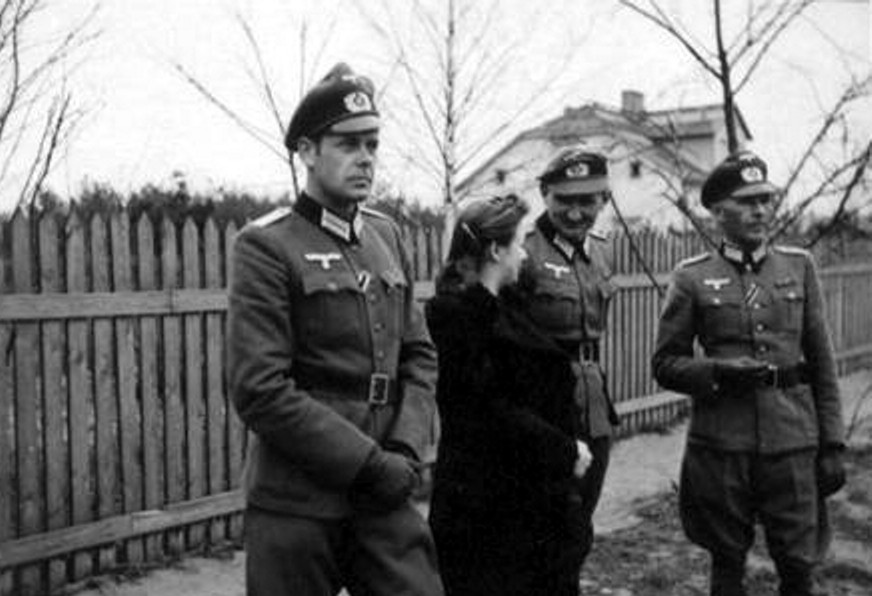 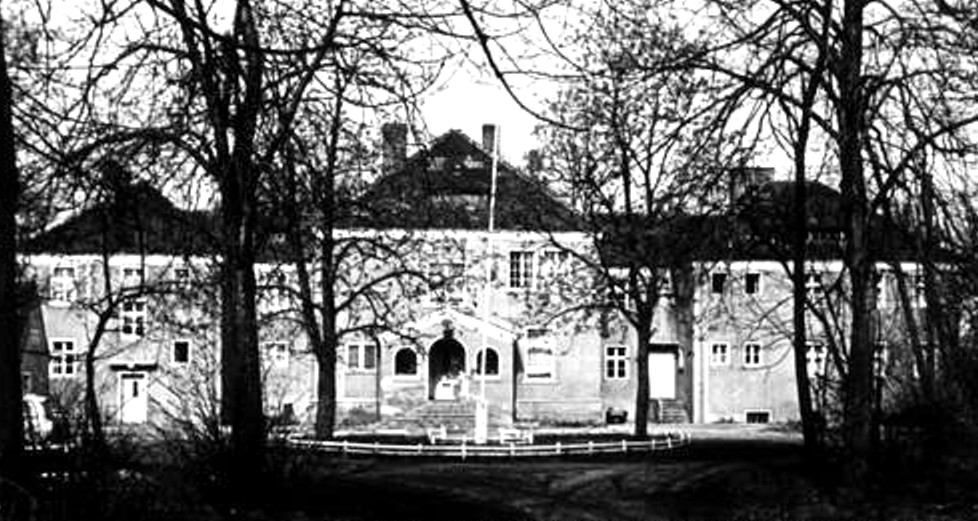 The Abwehrkampfschule „Quenzgut“[2] was the secret combat school of the Abwehr at Lake Quenz near Brandenburg an der Havel. Elite units like the Brandenburgers were trained here, but also many foreign volunteers like Robey Leibbrandt.

Despite its name implying counterespionage, the Abwehr was an intelligence-gathering agency and dealt exclusively with human intelligence, especially raw intelligence reports from field agents and other sources. The Chief of the Abwehr reported directly to the High Command of the Armed Forces (Oberkommando der Wehrmacht, or OKW). Intelligence summaries and intelligence dissemination were the prerogative of the Operations Branch, (as distinct from the Intelligence Branch), of the OKW, and through it to the intelligence-evaluation sections of the Army (Heer), the Navy (Kriegsmarine), and the Air Force (Luftwaffe). The headquarters (HQ) of the Abwehr were located at 76/78 Tirpitzufer, Berlin, adjacent to the offices of the OKW. After 4 February 1938, its name in title was Foreign Affairs/Defence Office of the Armed Forces High Command (Amt Ausland/Abwehr im Oberkommando der Wehrmacht).

Despite constraints and restrictive limitations on military redevelopment the German military was rescued from its dissolution and reactivated in 1921. Surveillance of radical political associations and subversive movements was the central obligation delegated to postwar intelligence officers in the volatile Weimar landscape. The trade unionists and communists formed the prominent assemblies singled out for attentive monitoring, as did premature incarnations of the National Socialist German Workers Party (NSDAP). The Nazi Party, of course, later instituted its own independent intelligence service in 1931, known as Sicherheitsdienst (SD), translating to Security Service. The designation of military intelligence transformed many times after World War I. After demobilization of the German army the Intelligence Office became the Intelligence Group, attached to the Foreign Armies Branch of General Staff. National security requirements endowed on the reconfigured and adjusted intelligence departments were minimally altered and between 1918 and 1925 only perfunctory and domestic activities were permitted. The Intelligence Group experienced a designation realignment once more in 1921, and was then referred to as Abwehr [Defense] Group of T3. At a later juncture clandestine services would become a divergent branch of the Supreme Command of the Armed Forces (OKW). A foremost development in modernizing the German intelligence apparatus into mechanisms tailored for optimizing warfare was the appointment to Abwehr chief on June 2, 1932, of Captain Conrad Patzig, who previously had directed the naval section. In April 1928 the Abwehr Group of T3 and the German navy’s traditional espionage unit were amalgamated, and by October 1930 all the remaining quasi- independent service command intelligence agencies and connected departments were subordinate to the authority of a powerful defense ministry. By Conrad Patzig’s tenure the three military branches-navy, army and air force-while prohibited from engaging in intelligence gathering installed qualified liaison officers for distributing intelligence requirements to Abwehr counterparts. Generally, they maintained a second capability specializing in intelligence for analyzing and reportage of field information. Patzig’s selection was in multiple contexts a radical transfer and generally not anticipated by the establishment of military or other intelligence agencies as they then existed. Patzig was the first naval officer to command military intelligence, discontinuing the intelligence community traditions that demanded Wehrmacht chiefs, and his tenure was embroiled in criticism and perfidious internal fissures. The chiefs of staff and Field Marshal von Blomberg, recently elevated to minister of war, provoked a challenging environment that irreparably hampered covert infiltrations and asset construction. Blomberg was aligned with the Fatherland’s ideologically inclined Nazi Party factions, his proclivities sympathetic towards the party’s in- house intelligence branches. In the Conrad Patzig era, Eastern Europe, Russia and Poland were identified as initial primary targets for counterespionage activity. The German rearmament phase was still embryonic, both Wehrmacht and Kriegsmarine merely beginning to resemble the military capabilities of other world powers. By 1934, the necessary funding had not materialized for intelligence services. The Abwehr diligently conducted their surveillance operations across the Eastern European area as authorized, turning informants in Poland and Russia, but the scope and penetration achieved primarily basic results. Opportunities to engage in traditional espionage actions were exceptions and this generation of officers failed in obtaining substantive battlefield experience. The SS and Foreign Office technically comprised foreign intelligence briefs, but analysis reveals minimal development had occurred. Certain opportunities to uncover strategic information on nations or regions of interest were presented by cooperation and joint ventures with other foreign intelligence departments. An approach of pursuing relations with affiliated foreign agencies expanded the scope of domestic secret service operations. In Eastern Europe contracts for information exchanging and relationships of convenience were informally invested with intelligence agencies. Lithuanian state security, for example, dis- closed information on the Soviet Union. The final 1930s period transpired to be the watershed moments for German intelligence, as a sophisticated evolution was mandated beyond the simplistic operations of 1934; decisive tactical and strategic intelligence on Czechoslovakia and Poland was now petitioned by the Wehrmacht from 1937 to 1939. In 1938, the Ministry of War, belatedly following another jurisdiction review process, was abolished, undoubtedly enriching the Abwehr’s position. This latest reconstruction of internal institutions proved regrettable for Field Marshall von Blomberg who was unceremoniously removed at the instigation of Heinrich Himmler and his deputy, Reinhard Heydrich. The Abwehr now reported directly to the Supreme Command of the Armed Forces.[3]

The Abwehr before Canaris

The Abwehr was created in 1921 as part of the Ministry of Defence when Germany was allowed to form the Reichswehr, the military organization of the Weimar Republic. The first head was Major Friedrich Gempp, a former deputy to Oberst Walther Nicolai, the head of German intelligence during World War I. At that time it was composed of only three officers and seven former officers plus a clerical staff. By the 1920s it was organized into three sections:

The Reichsmarine intelligence staff merged with the Abwehr in 1928.

In the 1930s, with the rise of the National Socialist movement, the Ministry of Defence was reorganized; surprisingly, on 7 June 1932, a naval officer, Fregattenkapitän Konrad Patzig, was named chief of the Abwehr despite the fact that it was staffed largely by Army officers. But perhaps not surprisingly, due to the small size of the organization and its limited importance at that time, it was unsuitable for a more ambitious Army officer. Another possible factor was that naval officers had more foreign experience than their Army counterparts and understood more of foreign affairs. However, all three services eventually developed their own intelligence staff.

Because of Abwehr-sponsored reconnaissance flights across the border with Poland, Patzig soon had confrontations with Heinrich Himmler, head of the SS. Army leaders feared that the flights would endanger the secret plans for an attack on Poland. Patzig was fired in January 1935 as a result, and was sent to command the new pocket battleship "Admiral Graf Spee"; he later became Chief of Naval Personnel. His replacement was another Reichsmarine captain, Kapitän zur See Wilhelm Canaris.

The Abwehr under Canaris

Before he took over the Abwehr on 1 January 1935, the soon-to-be Admiral Canaris was warned by Patzig of attempts by Himmler and Reinhard Heydrich to take over all German intelligence organisations. Canaris, a master of backroom dealings, thought he knew how to deal with them. But even though he tried to maintain an at least cordial relationship with them, the antagonism between the Abwehr and the SS did not stop with Canaris at the helm.

Canaris reorganized the agency in 1938, with the Abwehr being subdivided into three main sections:

Attached to Abwehr II. was the Brandenburg Regiment, an offshoot of Gruppe II-T (Technical Intelligence), and unconnected to any other branch outside of Abwehr II. Gruppe II-T.[4]

Abwehr liaisons were also established with the Army, Navy and Luftwaffe High Commands, and these liaisons would pass on specific intelligence requests to the operational sections of the Abwehr.

Under the structure outlined above, Abwehr placed a local station in each military district in Germany, ("Wehrkreis"), called 'Abwehrstelle' or 'Ast'. Following the German Table of Organisation and Equipment[5] model of Abwehr headquarters, each Ast was usually subdivided into sections:

Typically each Ast would be commanded by a senior Army or Naval officer and would be answerable to Abwehr HQ. in Berlin. Operations carried out by each Ast would be in tandem with the overall strategic plan formulated by Admiral Canaris. Canaris in turn would receive instructions on what intelligence gathering should take priority from the OKW or, increasingly after 1941, the Führer, directly. In practise however, each Ast was given considerable latitude in mission planning and execution- a facet of the organisation which ultimately damaged its intelligence gathering capability.

Each local Ast could recruit potential agents for missions and the Abwehr also employed freelance recruiters to groom and vet potential agents. In most cases, the agents who formed the Abwehr were recruited civilians, not officers/soldiers from the military. The recruitment emphasis seems to have been very much on quantity not quality. The poor quality of recruits often lead to the failure of Abwehr missions.

In neutral countries the Abwehr frequently disguised its organisation by attaching its personnel to the German Embassy or to trade missions. Such postings were referred to as "War Organisations" ("Kriegsorganisationen" or "KO's" in German). In neutral but friendly Spain for example, the Abwehr had both an Ast and a KO while Ireland had neither. In friendly countries of interest, occupied countries, or in Germany itself, the intelligence service would normally organise "Abwehr sub-stations" ("Abwehrleitstellen" in German or "Alsts" in German), or "Abwehr adjoining posts" ("Abwehrnebenstellen" in German). The "Alsts" would fall under the jurisdiction of the geographically appropriate Ast, which in turn would be supervised by the Central division in Berlin.

Chiefs of the Abwehr (with last rank)

Chief of the most important Department "Abteilung Ausland im Amt Ausland/Abwehr" was from 1939 until 1945 Vizeadmiral Leopold Bürckner.