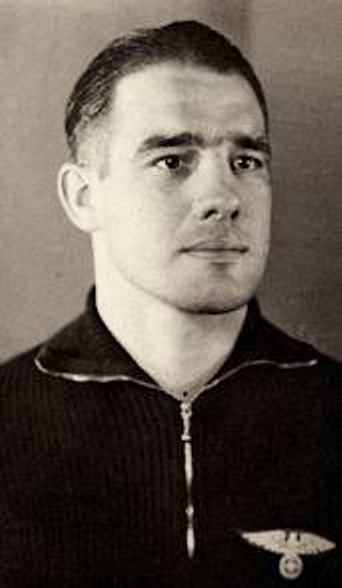 Sidney Robey Leibbrandt (born 25 January 1913 in Potchefstroom, Transvaal; died 1 August 1966 in Ladybrand, Free State province, South Africa) was a South African Boer of German and Irish descent. Leibbrandt was an Olympic boxer. Later, using the pseudonym Robert Leibbrand, he became a foreign volunteer of the Wehrmacht and German secret agent in South Africa for the German military intelligence (the Abwehr). 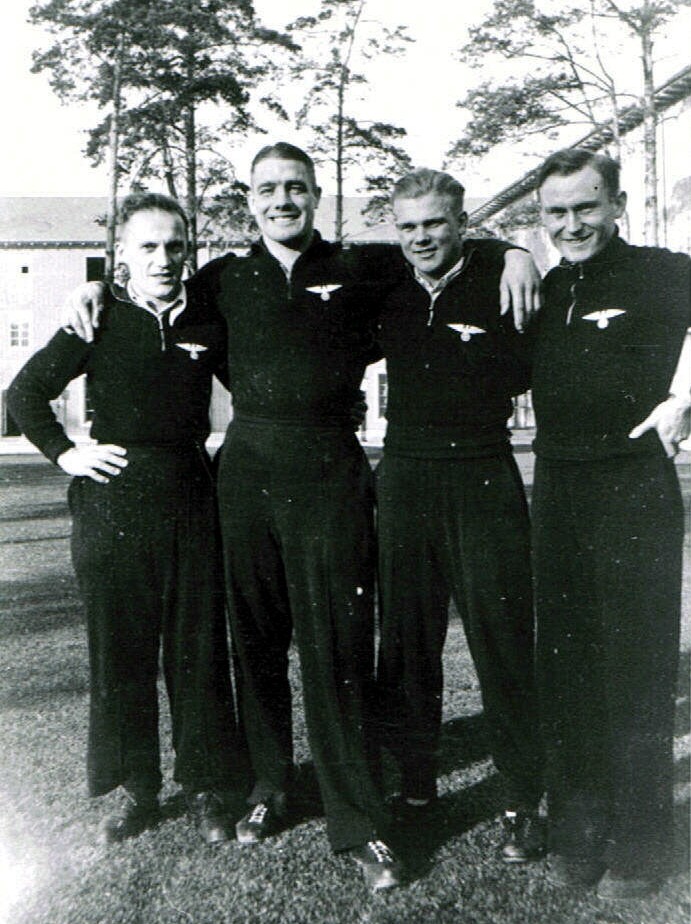 Leibbrand with comrades of the Brandenburgers at a sabotage training course of Abwehr II (Abwehrschool "Quenzgut") near Brandenburg an der Havel, west of Berlin. 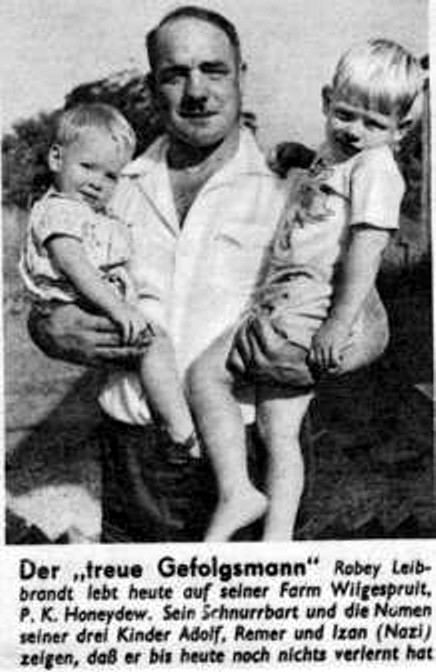 Leibbrandt with his both sons

Leibbrandt was the third of six children, his father was Sergeant Major Meyder (Meider) Johannes Leibbrandt[1] and his mother Susan Marguarite (née Joyce).

Sergeant Major Leibbrandt fought with his friend Jan Smuts in the Second Boer War. Later he wanted to become an officer in the South African Army, but when World War I broke out, he was ordered to invade German South-West Africa, an order, which he morally could not follow, because "Germans should not war against Germans". He was allowed to stay with the army as a Drill Sergeant for recruits, but he received no further promotions. Later he became a policeman and politician in Pretoria, where he was known as "Oom John" (Afrikaans for "uncle Johannes").

From 1924 to 1930, Robey Leibbrandt visited Grey college in Bloemfontein. With 13 he started to box.

Following the 1936 Berlin Olympics, Leibbrandt returned to Berlin in 1938 to study at the Reich Academy for Gymnastics, and stayed on when war broke out. He joined the German Army, where he became the first South African to be trained as a Fallschirmjäger and glider pilot. Later other South Africans also joined the Wehrmacht. During this time, Leibbrandt fell in love with a young German women. They were engaged and in 1940 their son Bernd Leibbrandt-Schaefer was born. The planned marriage was interrupted by the Operation Weissdorn.

Admiral Wilhelm Canaris ordered Operation Weissdorn, a plan for a coup d'état[4] to overthrow the government of General Jan Smuts, who had led South Africa into the Second World War on the side of the Allies. Leibbrandt left Germany on 5 April 1941. In June 1941, under the code name Walter Kempf, Leibbrandt was dropped on the Namaqualand coast north of Cape Town by a confiscated French sailboat (the Kyloe) under the command of "Ghostsailor" (German: Geistersegler) and Abwehr asset Lieutenant "S"[5] Christian Nissen aka Hein Mück. The Operation Weissdorn was one of the most succesful clouded in secrecy enterprises (German: Kriegsfahrt) of the Geistersegler.

Leibbrandt formed the Nasionaal Sosialistiese Rebelle drumming up support through fiery speeches and political campaigning, while secretly training members in bomb making.[6] He also made contact with another pro-German movement, the Ossewabrandwag, but the leader, Johannes Van Rensburg, was unsympathetic.[7]

Leibbrandt's group of 60 kept the British rulers of South Africa on high alert. They fought and committed sabotage succesfully. After a confrontation and fierce fire fight with soldiers in the fall of 1942, Leibbrandt went on the run and evaded the police for some time,[8] until he was eventually betrayed, captured and arrested in Pretoria at the end of December 1942. The arresting officer was Claude Sterley, a fellow Springbok Boxer who was, at the time, a Sergeant in the South African Police. Leibbrandt was armed at the time but did not resist his capture by his old friend.

On 11 March 1943 Leibbrandt was sentenced to death for high treason. Although Leibbrandt refused to give evidence at any stage in the trial, he claimed that he had acted "for Volk and Führer" and gave the German Salute (Hitler Salute) when he first entered the court, to which several spectators responded and calling Sieg Heil. After being sentenced to death, Leibbrandt shouted loudly and clearly "I greet death".

His sentence was commuted to life imprisonment by General Jan Smuts, who had great sympathies for the Leibbrandt family, in the same year. In 1948, Leibbrandt was released in an amnesty of war offenders by the newly victorious National Party government under Daniel François Malan,[9] which had opposed South Africa's entry into World War II on the side of the Allies and wanted to remain neutral. Leibbrandt left the prison and was greeted by crowds as a "folk hero".

Leibbrandt remained politically active in his later life, founding the organisation Anti-Kommunistiese Beskermingsfront (Anti-Communist Protection Front) in 1962, and producing a series of pamphlets titled Ontwaak Suid-Afrika (Wake up South Africa).[10] He was also a passionate sportsman and hunter.

Leibbrandt was married with Margaretha "Etha" Cornelia Botha, they had four sons (Hermann, Remer, Izan, and Meyder Johannes) and one daughter named Rayna.

Robey Leibbrandt died on 1 August 1966 after having a heart attack. The request by family and friends from around the world to let him be buried with full military honors was denied by the South African government.