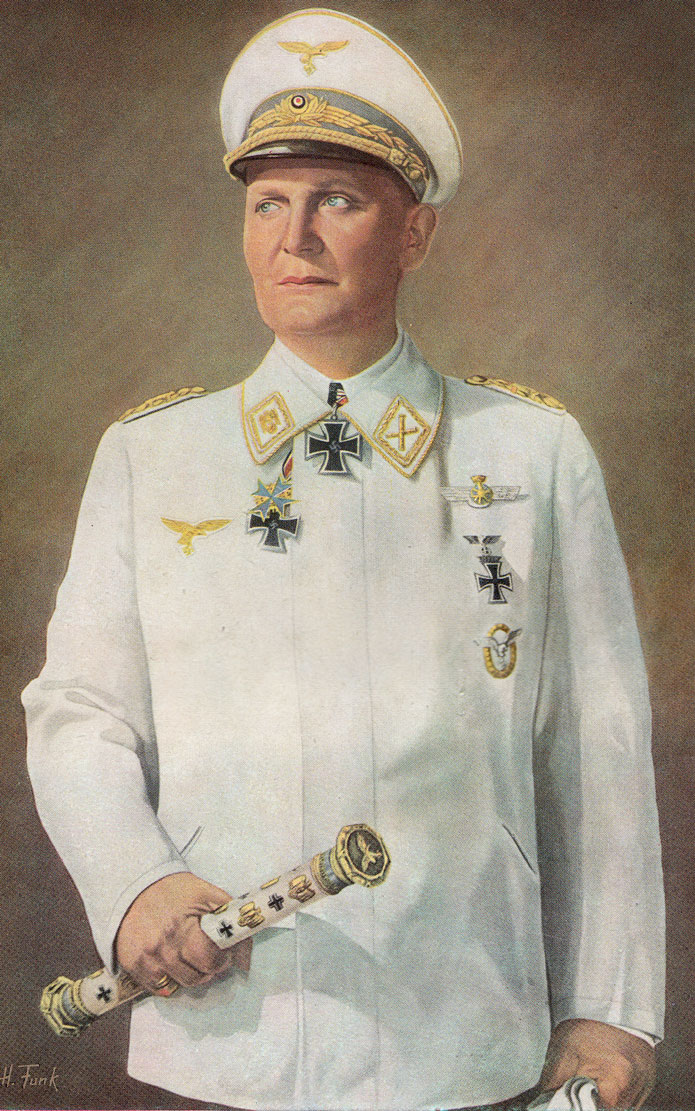 Reichsmarschall Göring is wearing the Grand Cross of the Iron Cross, below the Pour le Mérite and the Knight's Cross.

Reichsmarschall des Großdeutschen Reiches (literal translation: Marshal of the Realm of Greater Germany) was the highest rank in the Wehrmacht of Germany during World War II.

The rank of Reichsmarschall was originally created before the 12th century, during the time of the Holy Roman Empire of the German Nation. Historically, holding the rank of Reichsmarschall was neither unique nor as prestigious as it was during World War II (not to be confused with the very unique Reichs-General-Feldmarschall, the "imperial field marshal"). During the time of the German Empire and World War I, no one in the German armed forces held this rank.

During World War II, Hermann Göring was the only man to hold the rank of Reichsmarschall, having been promoted on 19 July 1940 by Adolf Hitler. Göring, who was the Commander-in-Chief of the Luftwaffe, held many other prestigious titles, such as Reich Master Hunter (German: Reichsjägermeister), Reichsforstmeister, and Commissioner Plenipotentiary of the Four-Year Plan (German: Leiter des Vierjahresplans).

Hitler appointed Göring to the rank of Reichsmarschall primarily to denote him as senior to the other commanders of the Wehrmacht's general staff promoted to field marshal the same day. Hitler had chosen Göring as his successor to leadership of the Reich; and one reason for Göring's promotion was so that in the event of Hitler's death, a clear line of succession from the military would have already been established.

In 1940 Hitler bestowed upon Göring the title of Reichsmarschall des Großdeutschen Reiches (“Marshal of the Empire”), further complicating the Wehrmacht chain of command. While the Luftwaffe technically answered to the OKW, Göring now outranked OKW chief Field Marshal Wilhelm Keitel. Göring did suffer some diminished prestige as a result of the Luftwaffe’s failure to knock Britain out of the war during the Battle of Britain and the Blitz, but his authority remained unchallenged by anyone but Hitler until the end of the war.[1]

In April 1945, following a telegram by Göring asking Hitler for permission to assume leadership of the Reich, Hitler relieved Göring of his duties and named a new successor. This was Grand Admiral (German: Großadmiral) Karl Dönitz, who was specifically appointed as successor by Hitler on or before April 30, 1945. Dönitz was however only notified of his appointment as successor on May 1, 1945 by Martin Bormann and Joseph Goebbels.