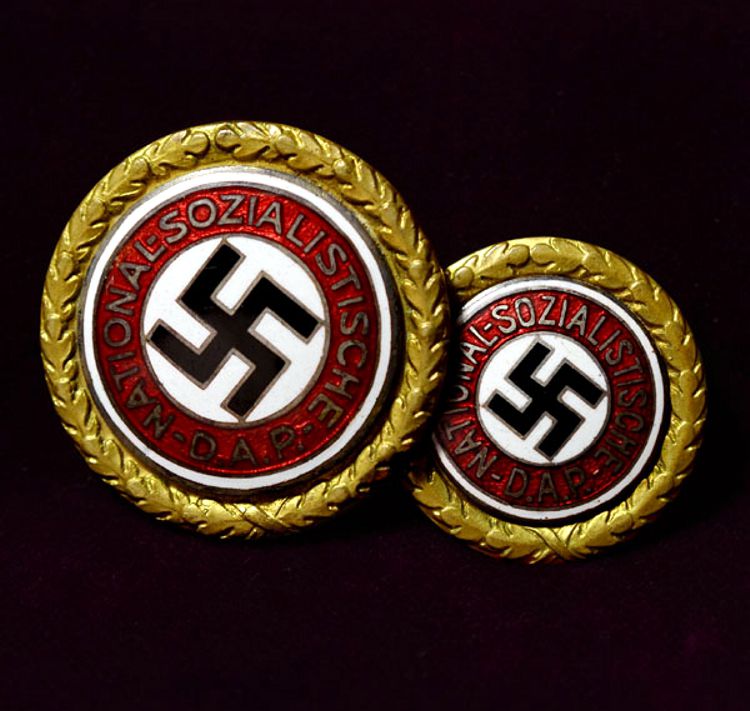 The Golden Party Badge (German: Goldenes Parteiabzeichen), officially Golden Badge of Honor of the NSDAP (German: Goldenes Ehrenzeichen der NSDAP), was the third highest party award of the NSDAP. The basic NSDAP party badge[1] was introduced for those who joined the Party after the electoral breakthrough in the September 1930 Reichstag elections. The Golden Party Badge forms the medallion of the 1942 created "German Order", the highest decoration of the NSDAP. 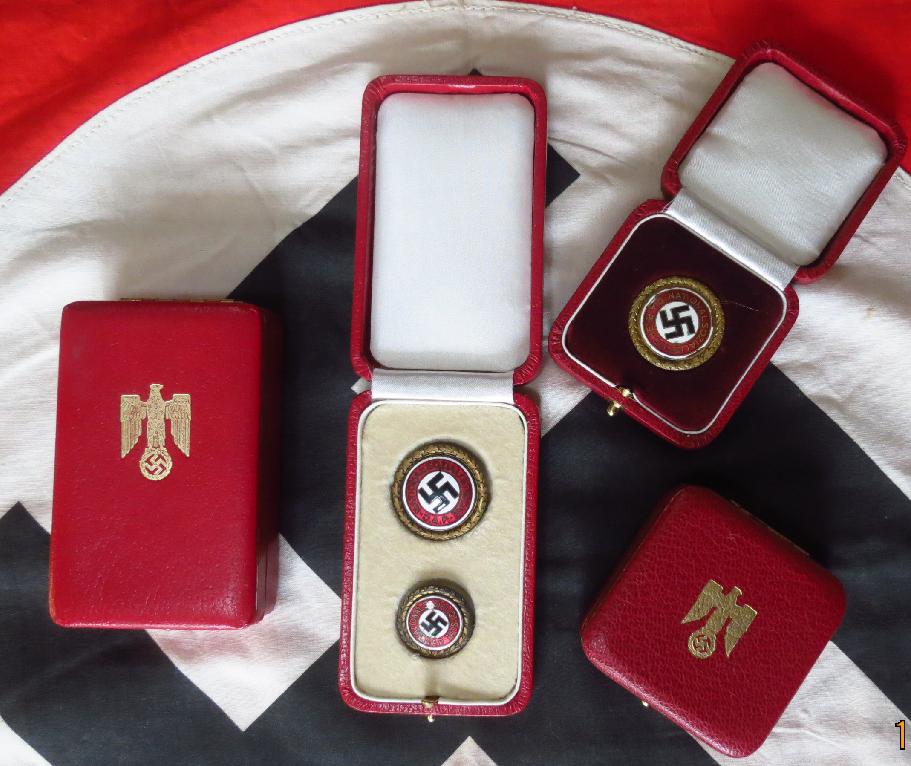 The badge of honor establish by Adolf Hitler on 9 November 1933 (with decree of 13 October 1933), was awarded in both a large (30 mm; große Ausführung) and a small version (24 mm; kleine Ausführung). The badges are approximately 3 cm in diameter and feature a swastika on a white background at their centre. This is surrounded by the lettering "National Sozialistische D.A.P." on a red background, and the outer of the badge is edged by a wreath of oakleaves. The back of the badge is gold coloured and features a vertical flat pin.

The first 100,000 members who had joined and had served the party uninterrupted were given the right to wear it (these were denoted by the party members' number stamped on the reverse). The badge was associated with the Alte Kämpfer (Old Fighters) and those favored by the Führer, the NSDAP elite. The Alte Kämpfer, also referred to as the "Old Guard" (Alte Garde), were those who had joined the Party before 1930.

Other Golden Party Badges (with the initials 'A.H.' stamped on the reverse) were awarded at the discretion of Adolf Hitler to certain members of the party who merited special attention. An identical badge was awarded each year on the 30th January to persons who had shown outstanding service to the NSDAP or National Socialist Germany. Examples of such awards include to Generaloberst Wilhelm Keitel for his direction of the 1938 liberation of the Sudetenland, and to Grand Admiral Karl Dönitz in 1943 for war services with the Kriegsmarine.

The Golden Party Badge (Goldenes Ehrenzeichen der NSDAP) was introduced by a Hitler's decree of 13 October 1933 as a reward for NSDAP members whose party membership number ranked (as of 9 November 1933) from 1 to 100,000 and who had been active and never left the party. On 9 November 1933, the badge was actually rewarded to 20,487 men and 1,795 women among the 100,000 members that were eligible, who received their reward, engraved on the back with the badge number (and its corresponding paper certificate) during the commemoration of the 10th anniversary of the Beer Hall Putsch. At the discretion of Hitler, other Golden Party Badges were awarded after this date, and at various periods to certain deserving members of the NSDAP. Some special badges were awarded during the ceremonies held on 30 January of each year for the celebration of the Machtergreifung (Hitler's accession to power) for those who had shown outstanding service for the NSDAP or the Country. These ones were engraved on the back with the "A.H." initials and the date (ie: 30.1.39) The Golden Party Badge came in two sizes: 30 mm diameter for wear on service uniforms and 24 mm diameter for wear on a civil jacket. Only 2 makers (from Munich) were allowed to produce the badge: The Joseph Fuess company, which only produced the 24 mm version, and the Deschler & Son company, which produced both versions (note: from 1941 onward, the Deschler company was the sole producer of Golden Party badges). Hitler's Golden Party Badge was engraved on the back with the number "1". He owned several copies of it, which he kept in various places and on various uniforms. He wore it for the first time on 9 November 1933, the day the badge was introduced after the October decree. Strangely, photo records show that he stopped wearing it from that day until early 1937 (the earlier photo of Hitler wearing it again is dated 10 February 1937).[2]

The bearers of the badge of honor were free to wear a traditional district badge instead of the badge of honour. Extremely rare were variants of the Golden Party Badge of the NSDAP for foreigners. Adolf Hitler had apparently also planned to expand the Golden Party Badge with a variant on a rune star and a second level as a "Silver Badge of Honour". Sample pieces were designed, but these variants were not awarded. In April 1945, literally minutes before his suicide in the Führerbunker, Adolf Hitler gave his own Golden Party Badge to Magda Goebbels and proclaimed her as the "First Mother of the Reich". Thus, technically by verbal decree, Hitler had in fact created a new grade of the honour badge, although status as an official decoration was never recorded.