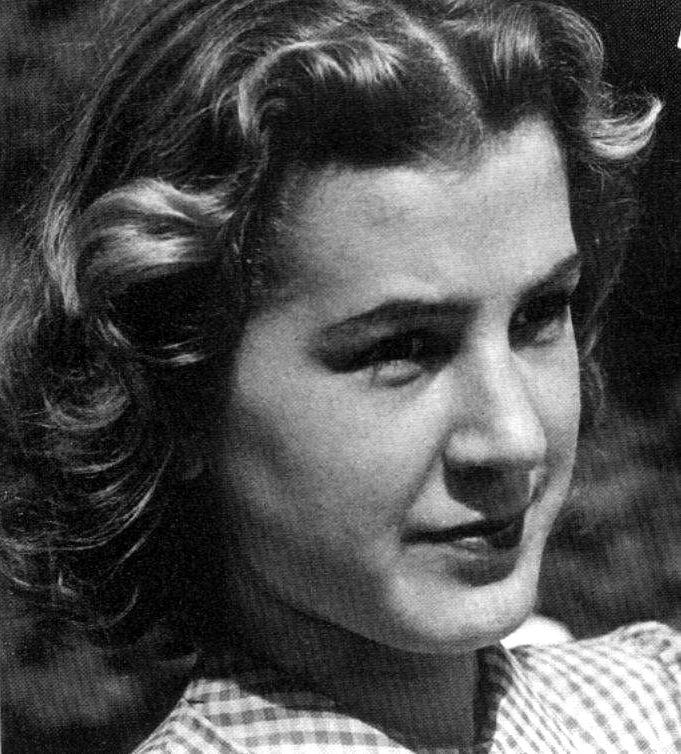 Traudl Junge; she, like almost all Germans, only found out about the Holocaust after the war.[1] David Irving has stated that
"Every one of Hitler's private staff was closely interrogated on precisely this issue by Americans and British after the war, and all of them stated independently of each other that at Hitler's headquarters, in his secret circle, there was never even the slightest hint or mention of anything untoward happening to the Jews in the east or in the concentration camps. I have the interrogation reports.[2]

Gertraud "Traudl" Junge (b. 16 March 1920 in Munich; d. 10 February 2002 ibid) was a German typist as well as fourth and youngest personal secretary of Adolf Hitler from late 1942 until April 1945. Following her arrest and imprisonment in June 1945, both the Soviet and the US military interrogated her regarding what occurred as Hitler's personal secretary. Later, after the war, she continued to work as a secretary. 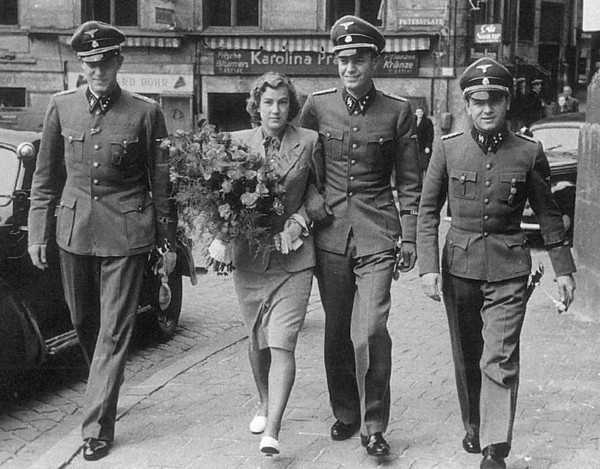 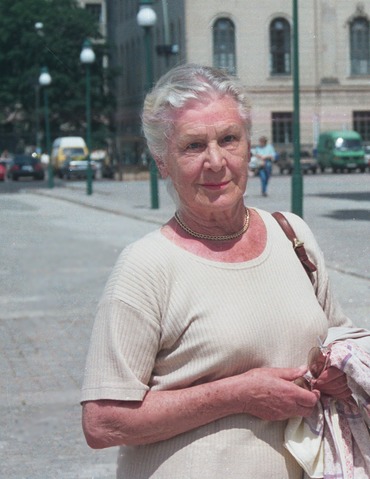 Traudl Junge was born Gertraud Humps in Munich Germany on 16 March 1920. Her father Maxwell Humps, born in 1893, was a brewmaster for Lowenbrauerei. In 1919, Maxwell lost his job. In 1920, he joined the patriotic Freikorps Oberland (de) and was present at the storming of the Annaberg, Upper Silesia and was also involved with Munich Putsch on 8-9 November 1923. He was awarded the NSDAP Blood Order. After this, Maxwell went to Turkey, leaving his family, and did not resurface until 1933, with the rise of the Third Reich

In 1942, Traudl was appointed Hitler's personal secretary, with the help of her father and family friend, Sepp Dietrich. In 1943, 23 year old Traudl married SS Officer Hans Junge (who fell in combat at Normandy in 1944), with Otto Günsche and Erich Kempka as their witnesses.

In 1945, Junge was with Hitler in Berlin. She typed Hitler's last private and political will and testament in the Führerbunker, shortly before his suicide. Junge wrote that while playing with the Goebbels children on 30 April 1945:

"Suddenly . . . there is the sound of a shot, so loud, so close, that we all fall silent. It echoes on through all the rooms. 'That was a direct hit,' cried Helmut [Goebbels] with no idea how right he is. The Führer is dead now."

On 1 May, Junge left the Führerbunker with a group led by SS-Brigadeführer Wilhelm Mohnke. Also included in the group were Hitler's personal pilot, Hans Baur, the chief of his bodyguard, Hans Rattenhuber, secretary Gerda Christian, secretary Else Krüger, Hitler's dietician, Constanze Manziarly, and Dr. Ernst-Günther Schenck. In the morning of 2 May, Soviet troops discovered the group hiding in a cellar off the Schonhauserallee.

The movie Der Untergang, which has been widely cited for much historical accuracy, depicts Junge as being saved by a boy, with whom she walks through Russian lines, but this is a fictional (and metaphorical) dramatic device invented for the film's ending. In truth, Junge was raped repeatedly by Russian soldiers, as were many other German women during the fall of Berlin in 1945.

She was subsequently held for a year as the "personal prisoner" of a Russian major. At least one author asserts that Junge suffered a fractured skull while resisting a gang rape, but she did not mention such a rape or injury in her autobiography. After spending time in a Russian prison camp, Junge returned to Germany to work as a secretary and later, a sub-editor.

Following the war, Junge was not widely known outside the academic and intelligence communities. Other than appearing in the television documentary The World at War (1974), she lived a life of relative obscurity. This included two brief periods of residence in Australia, where Junge's younger sister still lives.

She returned to the public eye with the release of an autobiography, Until the Final Hour (2002) (edited by Melissa Müller), which described the time she worked for Hitler. This suddenly brought her much attention and for a few days she was accorded something approaching global celebrity status when, aged 81, she died in a Munich hospital. She had also been interviewed for the documentary film Blind Spot: Hitler's Secretary (released on the day she died[3]).

Her book was used as a source for the movie Der Untergang (Downfall, 2004), much of which is told from her perspective. Excerpts from Blind Spot: Hitler's Secretary were also used in the movie.

Traudl Junge died of cancer in Munich on 10 February 10 2002, shortly before her 82nd birthday. Just before her death, she is reported to have said, "Now that I've let go of my story, I can let go of my life."