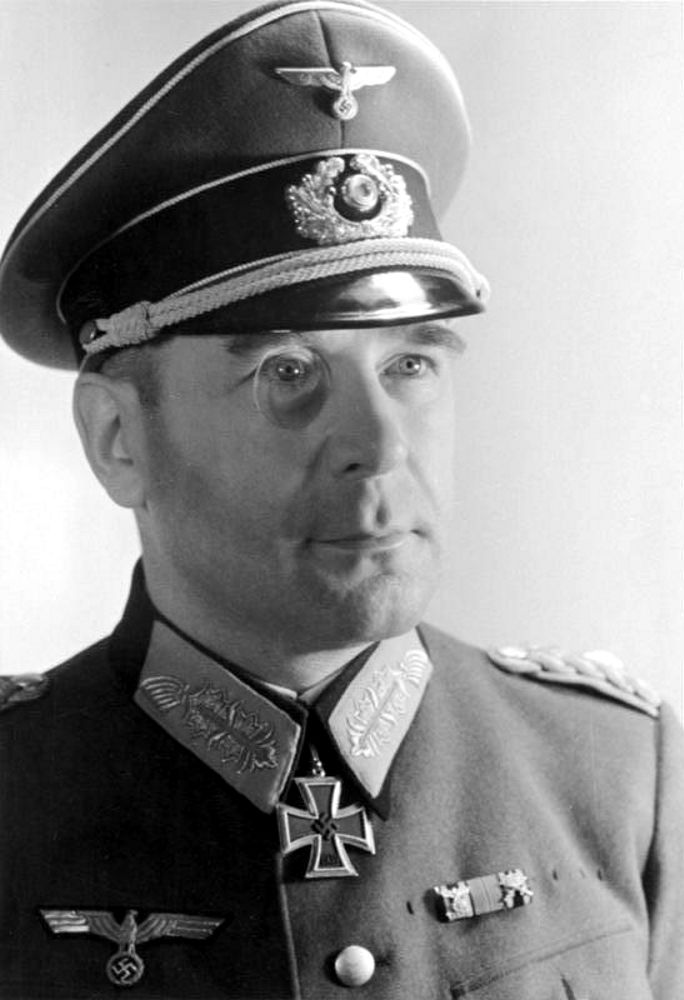 Hans Krebs (b. 4 March 1898 in Helmstedt, Duchy of Brunswick, German Empire; d. 1 May 1945 in Berlin) was a German officer of the Imperial German Army, the Reichswehr and the Wehrmacht, finally becoming General of the Infantry. He was a recipient of the Knight's Cross of the Iron Cross with Oak Leaves in World War II. 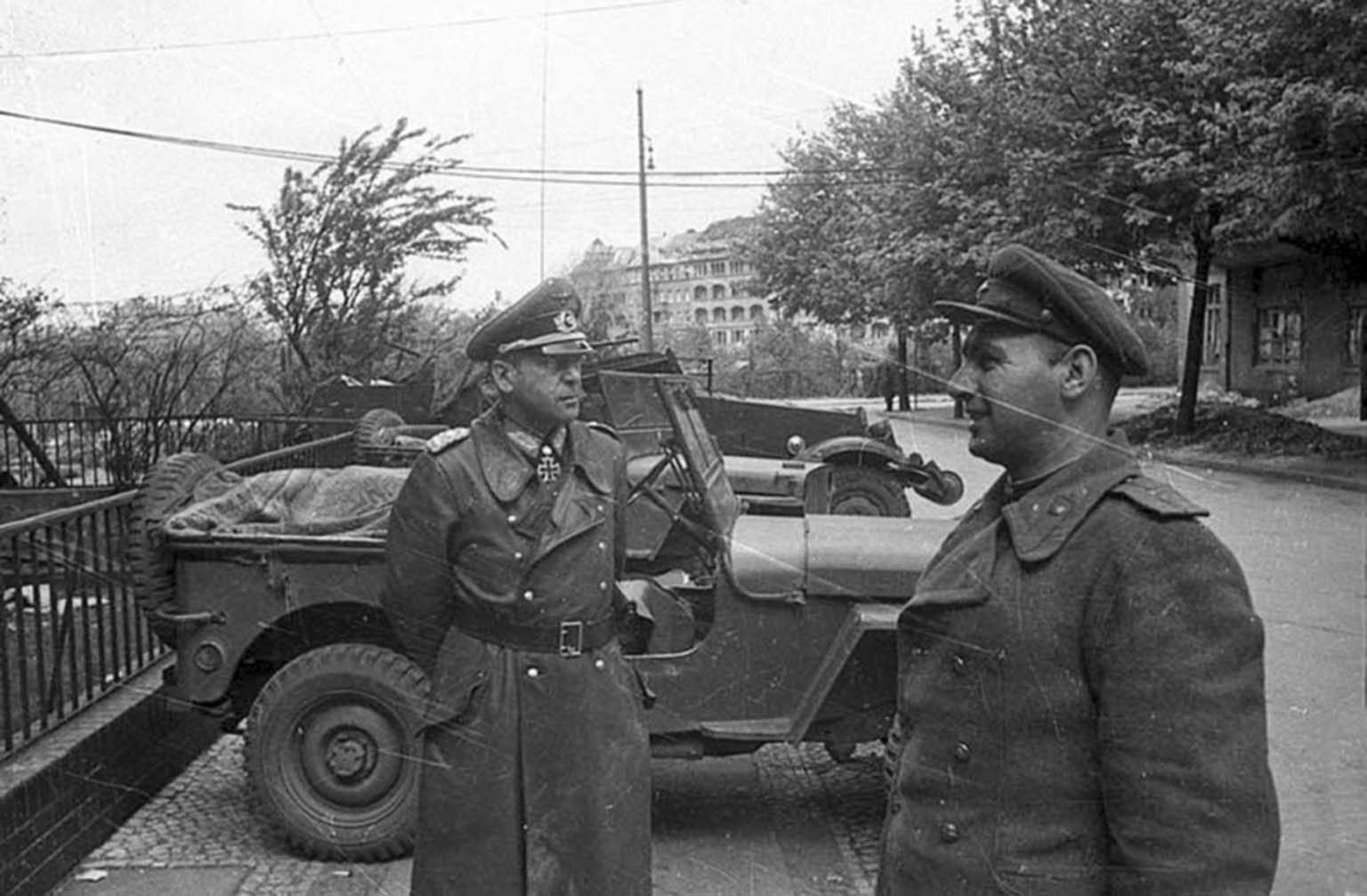 Chief of the General Staff of the German Ground Forces, infantry general Hans Krebs (left), who arrived on 1 May 1945, to the location of Soviet Army in order to draw the Supreme Command of the Red Army into the negotiation process. After the failure of the mission, on the same day, General Hans Krebs shot himself. Other sources say it was in the night from 1 to 2 May 1945.

Krebs was born in Helmstedt. He volunteered for service in the Imperial German Army in 1914, was promoted to lieutenant in 1915, and to first lieutenant in 1925. Krebs was a career officer, and reached the position of Head of General Staff of various army groups until he became an General of Infantry.

"General Krebs, who has long been Chief-of-Staff to Model, is coming [to the Führerbunker] in place of Guderian. Krebs is an outstanding personality. For a time, he was Military Attaché in Moscow, but has not been spoiled by diplomatic activity."[1]

Appointed Chief of the Army General Staff (OKH), Krebs was in the Führerbunker below the Reich Chancellery during the Battle for Berlin. On 28 April 1945, Krebs made his last telephone call from the bunker, to General Wilhelm Keitel at the new Supreme Command Headquarters in Fürstenberg. He told Keitel that, if relief did not arrive within 48 hours, all was lost. Keitel promised to exert the utmost pressure on General Walther Wenck (de) who commanded the German 12th Army and General Theodor Busse who commanded the German 9th Army. On 22 April, German dictator Adolf Hitler had ordered both of these armies to link up and come to the relief of Berlin.

Later on 28 April, when it was discovered that Heinrich Himmler was trying to negotiate a backdoor surrender to the Allies via Count Folke Bernadotte, Krebs became part of a tribunal set up by Hitler to court-martial associates of Himmler, deemed to be sufficiently close to have known of his intentions, who could be rounded up in Berlin. One person to face this tribunal was Hermann Fegelein, Himmler's ajudant, and Eva Braun's brother-in-law. SS-General Wilhelm Mohnke presided over the tribunal which, in addition to Krebs and Mohnke, included General Johann Rattenhuber and General Wilhelm Burgdorf.

On 29 April, Krebs, Burgdorf, Joseph Goebbels, and Martin Bormann witnessed and signed the last will and testament of Adolf Hitler. Hitler dictated the document to his personal private secretary, Traudl Junge. Bormann was head of the Party Chancellery (Parteikanzlei) and private secretary to Hitler. Late in the evening of 29 April, Krebs contacted General Alfred Jodl (Supreme Army Command) by radio and made the following demands:

In the early morning of 30 April, Alfred Jodl replied to Krebs:

Late on 30 April, the Soviet forces continued to fight their way into the center of Berlin. Hitler then committed suicide. In accordance with Hitler's last will and testament, Joseph Goebbels, the Minister for Public Enlightenment and Propaganda, became the new "Head of Government" and Chancellor of Germany (Reichskanzler).

On 1 May, within hours of Hitler's suicide on April 30, Goebbels sent Krebs and his Chief of Staff Colonel Theodor von Dufving, under a white flag, to deliver a letter he had written to General Vasily Chuikov. The letter contained surrender terms acceptable to Goebbels. Chuikov, as commander of the Soviet 8th Guards Army, commanded the Red Army in central Berlin. Krebs arrived shortly before 4 a.m. and took Chuikov by surprise. Krebs, a Russian-speaker, informed Chuikov that Hitler and Eva Braun, his wife, had committed suicide in the Führerbunker. Chuikov, who was not aware that there was a bunker under the Reich Chancellery, or that Hitler was married, calmly said that he already knew all of this. Chuikov was not, however, prepared to accept the terms in Goebbels' letter or to negotiate with Krebs. The Soviets were unwilling to accept anything other than complete unconditional surrender. Krebs was not authorized by Goebbels to agree to this. The meeting therefore ended with no agreement. According to Traudl Junge, Krebs returned to the bunker looking "worn out, exhausted". The surrender of Berlin was thus impeded as long as Goebbels was alive.

At around 8 p.m. on the evening of 1 May, Goebbels removed this last impediment. Shortly after their children were killed, Goebbels and his wife went up to the garden of the Chancellery. Here, Joseph and Magda Goebbels committed suicide after arranging to have their bodies burned by Goebbels's adjutant, Günther Schwägermann. But, even after the death of Goebbels, Krebs was still in a state of despair. He was now suicidal himself. The responsibility for surrendering the city fell to General of the Artillery (General der Artillerie) Helmuth Weidling, the commander of the Berlin Defense Area.

As the Soviets advanced on the Führerbunker, Krebs was last seen by others, including Traudl Junge, in the bunker when they themselves left to attempt to escape. Junge relates how she approached Krebs to say goodbye and how he straightened up and smoothed his uniform before greeting her for the last time. He and at least two other senior officers, including General Wilhelm Burgdorf, stayed behind with the stated intention of committing suicide. The bodies of Krebs and Burgdorf were found when Soviet personnel entered the bunker.