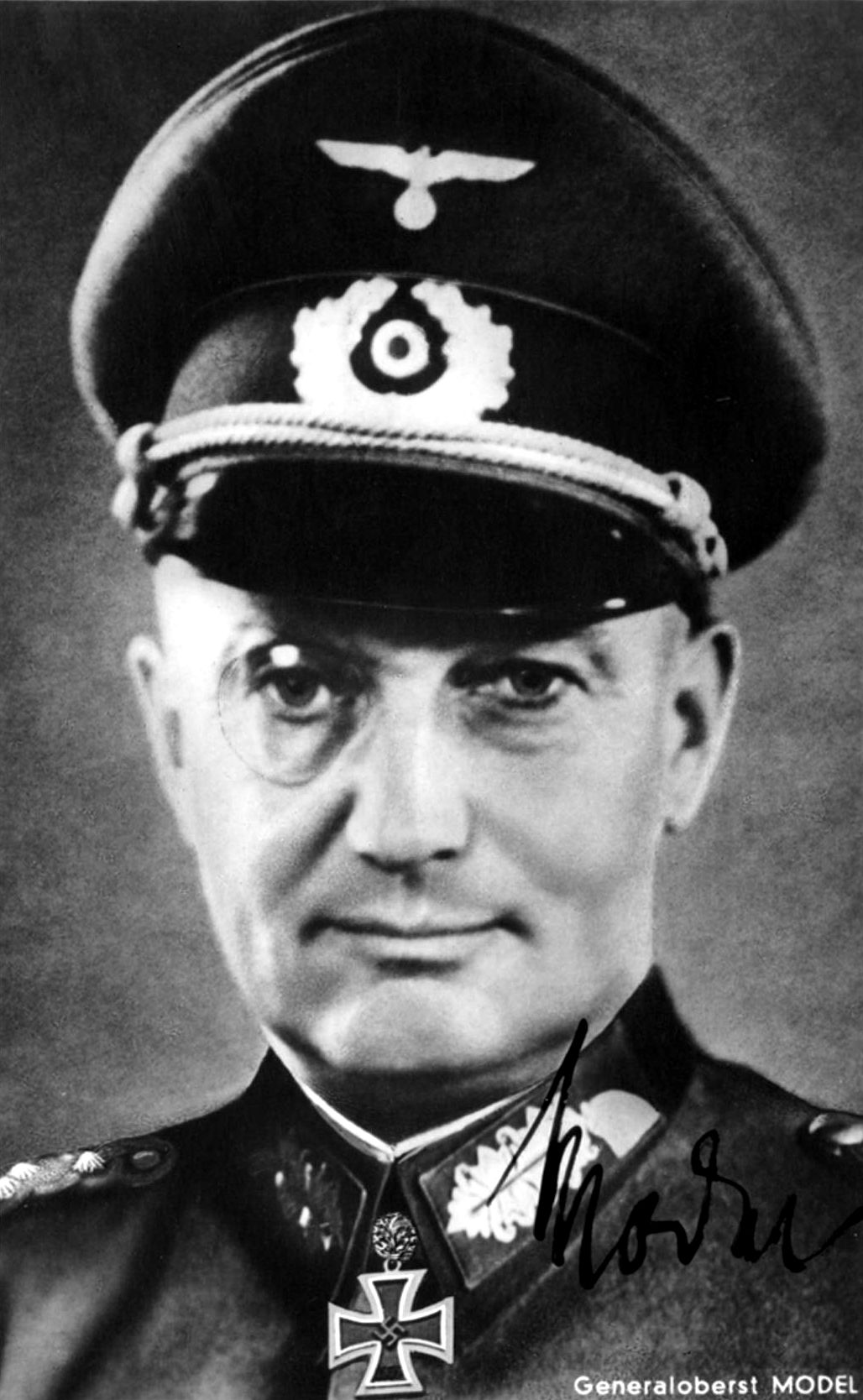 Otto Moritz Walter Model (b. 24 January 1891 in Genthin, Saxony-Anhalt; d. 21 April 1945 near Duisburg) was a German officer of the Imperial German Army, the Freikorps, the Reichswehr and the Wehrmacht, and the youngest Generalfeldmarschall during World War II. He is noted for his defensive battles in the latter half of the war, mostly on the Eastern Front but also in the west, and for his close association with Adolf Hitler, who held him in high regard. Model has been called the Wehrmacht's best defensive tactician. 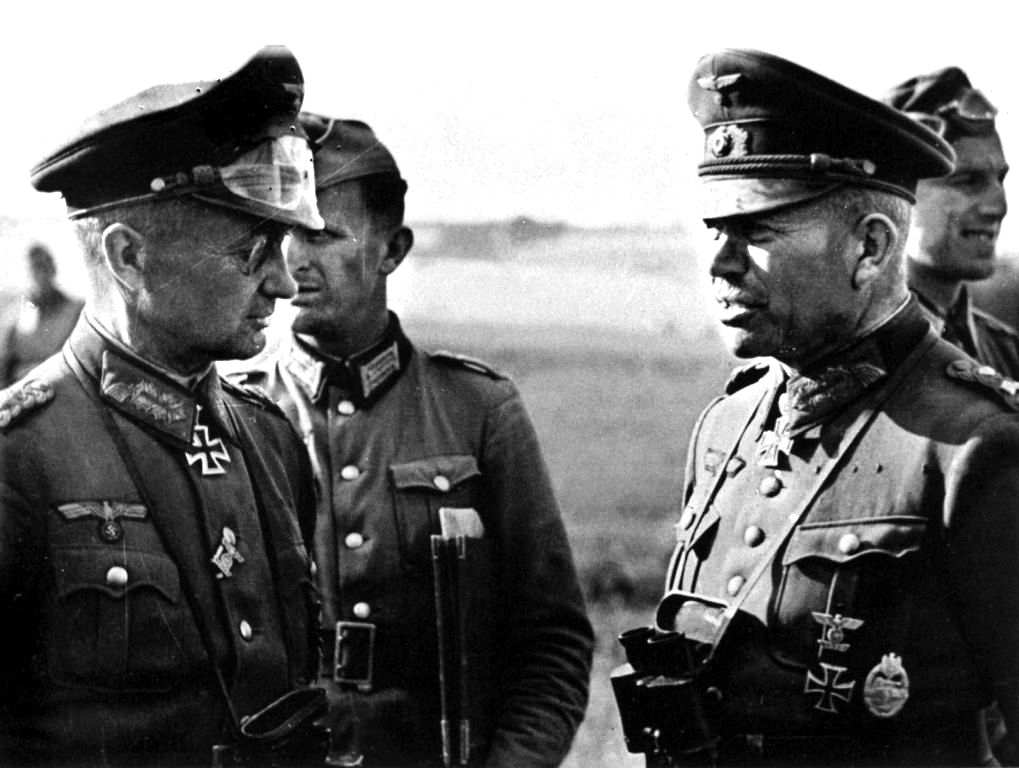 Model (left) and Heinz Guderian on the front 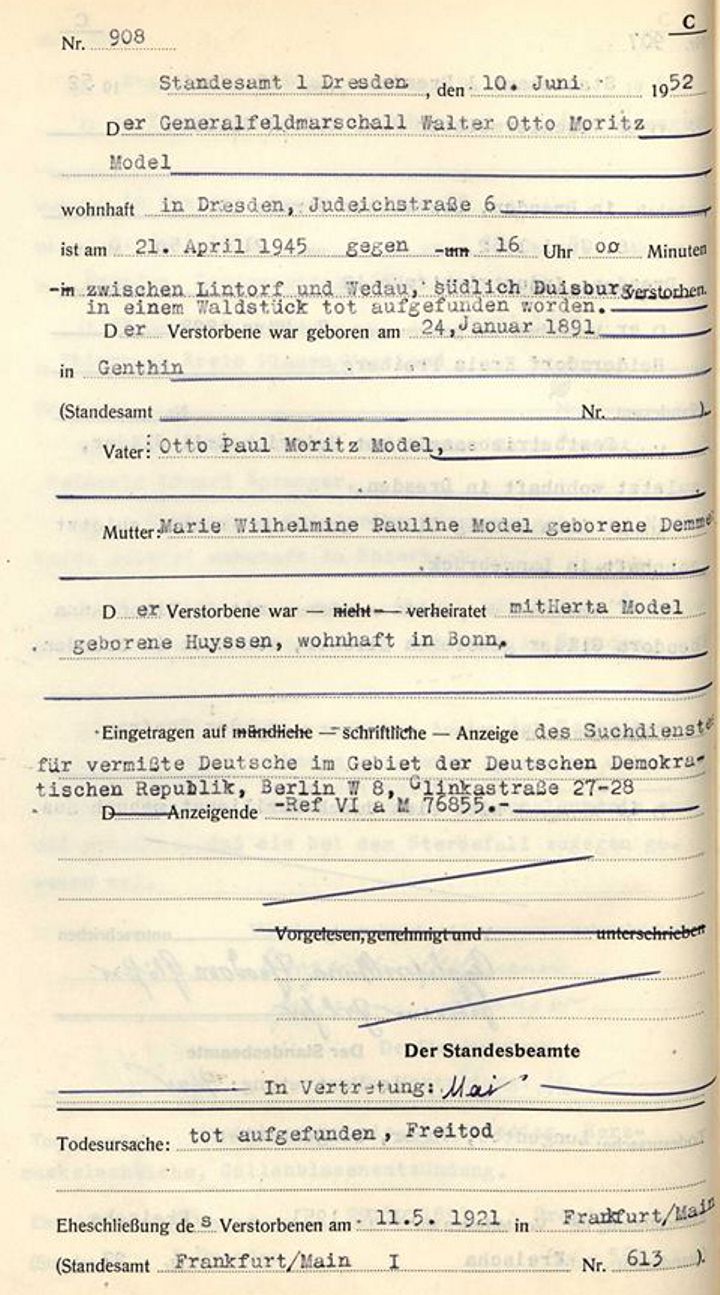 Born in Genthin, 80km west of Berlin, he was the son of a girls' school music teacher, Otto Paul Moritz Model, and his wife Maria Wilhelmine Pauline, née Demmer, a middle class, non-military family. Walther Model was raised in the German Evangelical Church, and initially attended the village school in Genthin, an agricultural town. In 1900 Model's father became a music director in Erfurt, and Walther attended the Gymnasium there for the next six years. At school, Walther took no interest in sports, but joined a literary society and showed an aptitude for Latin, Greek, history and poetry. His family finally settled in Naumburg, a garrison town. In February 1909, Walther was one of 19 students in his Gymnasium who passed the examinations and received their Arbitur. Walther, whose family expected him to enter law school, opted to join the army and entered the army officer cadet school (Kriegsschule) in Neisse in 1908. He was a good student, and was commissioned as a Lieutenant (Leutnant) into the 52nd Infantry Regiment von Alvensleben in August 1910.[1] It is said he made few friends among his fellow officers, and soon became known for his ambition, drive and blunt outspokenness. These were characteristics that would mark his entire career.

In World War I, the 52nd Infantry formed part of the 5th Division within the German Army, fighting on the Western Front. Model served as the adjutant of his regiment's 1st Battalion. In May 1915 he was severely wounded near Arras, and in October he won the Iron Cross, First Class. His deeds brought him to the attention of his divisional commander, who despite misgivings about his "uncomfortable subordinate", recommended him for a posting to the General Staff. Among other things, this meant that Model took part in only the initial stages of the Battle of Verdun, and escaped the carnage of the Somme, to which his division was committed in his absence.

In April 1945 under intense pressure, Model's staff tried to persuade him to open surrender talks with the Allies, but he would have none of it. By April 11th Essen had fallen to the US Army and German morale in the West was collapsing. On April 15th American Major-general Matthew Ridgeway sent Model a personal request under a flag of truce to surrender. Model refused to consider the offer. The Ruhr pocket (Heeresgruppe B) fell to the Americans and Model and his squad were now on the run. He had hoped to slip through American lines to reach the Harz Mountains, but this proved impossible. He told his men to go home, that for them the war was over.[2] He had little desire to witness the aftermath of defeat and said to his staffers before dissolving his command:

"Has everything been done to justify our actions in the light of history? What can there be left for a commander in defeat? In antiquity they took poison".

On the morning of April 21 he was alone with Oberstleutnant Roger Michael in the woods near Wedau and told him to "bury me here". He walked alone into the woods, drew his pistol and ended his remarkable 36 year military career with a single shot to the head.[3] The location, between Duisburg and the village of Lintorf, is today part of the city of Ratingen.

On 11 May 1921 Hauptmann Walter Model married in Frankfurt-am-Main his fiancée, Herta Huyssen (1892–1985). They had three children: Hella, Christa and Hansgeorg (ᛉ 1. März 1927 in Görlitz) who would later become an officer of the Bundeswehr in the Federal Republic of Germany.