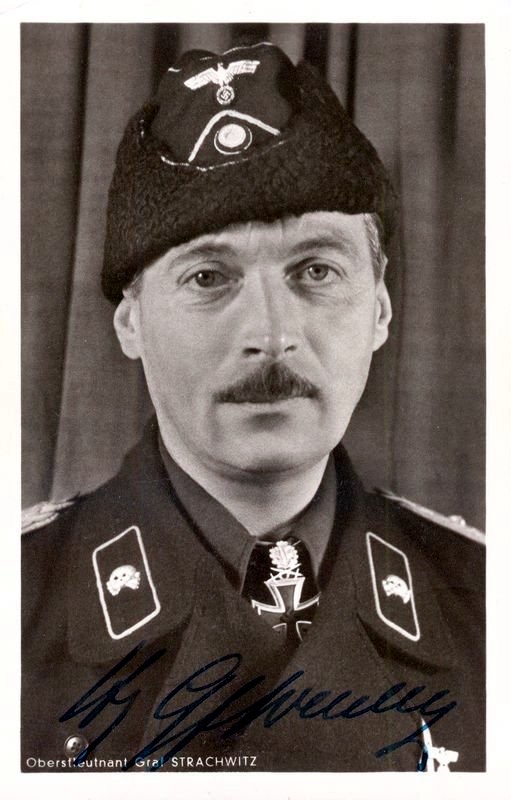 Hyazinth Graf Strachwitz von Groß-Zauche; internationaly he is also known under his nickname Der Panzergraf (The Count or Lord of tanks).

Hyacinth Graf Strachwitz von Groß-Zauche und Camminetz[1] (b. 30 July 1893 in Groß Stein, Province of Silesia, German Empire; d. 25 April 1968 in Trostberg, Upper Bavaria, Germany[2]) was a German aristocratic as well as officer of the Prussian Army, Imperial German Army, the Freikorps, the Reichswehr, the SS and the Wehrmacht, at last highly decorated Generalleutnant in WW II. 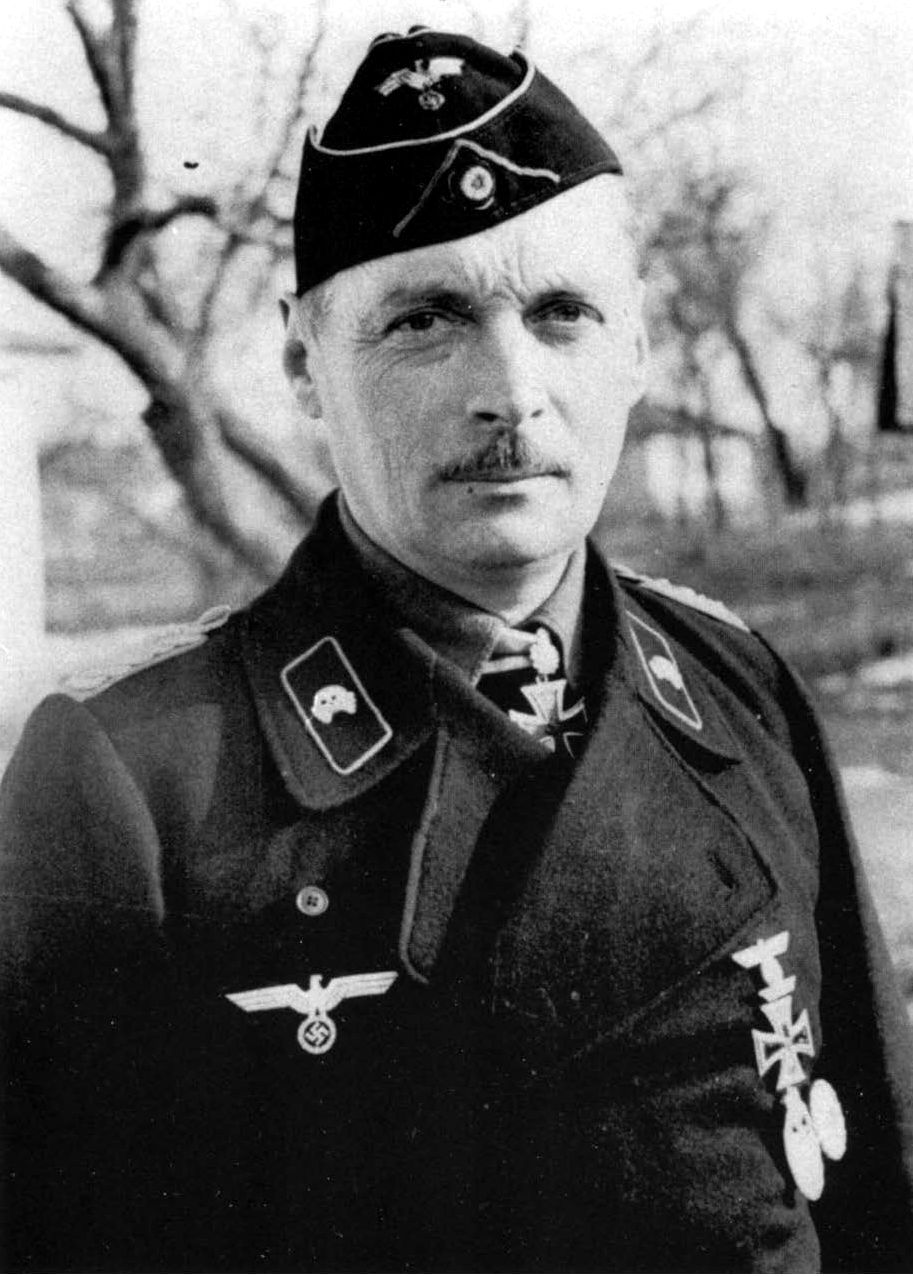 In 1921, during the Silesian Revolt, when Poland tried to separate Upper Silesia from the Weimar Republic, Graf Strachwitz served under the Generals Bernhard von Hülsen (Freikorps „von Hülsen“) and Karl Höfer. At the peak of the conflict when the Poles dug in on the Annaberg, a hill near the village of Annaberg. The German Freikorps launched the assault in what would become the Battle of Annaberg, which was fought between 21 May and 26 May 1921. Graf Strachwitz and his two battalions outflanked the Polish positions and overran part of them in hand-to-hand combat around midnight on 21 May. Strachwitz was the first German to reach the summit. They captured six field guns, numerous machine guns, rifles and ammunition.

The Ministry of the Reichswehr informed him in 1921 that he had been promoted to Oberleutnant (first lieutenant), the promotion backdated to 1916. In 1925, Graf Strachwitz and his family moved from Groß Stein to their manor in Alt Siedel, because of personal differences with his father, who remained in Groß Stein (Groß-Stein). Between 1924 and 1933, he founded two dairy cooperatives which many local farmers joined. In parallel he studied a few semesters of forestry. He used his influence in Upper Silesia to modernize forestry and farming. His ambitions were aided by his presidency of the Forstausschuß (Forestry Committee) of Upper Silesia and his membership in the Landwirtschaftskammer (Chamber of Agriculture). Graf Strachwitz completely took over his father's estate in 1929, first as the general manager and then as owner. This made him one of the most wealthy land and forest owners in Silesia. Along with the palace in Groß Stein he owned a lime kiln and quarry in Klein Stein—present-day Kamionek—and Groß Stein, a distillery in Groß Stein and Alt Siedel. Since 1932, he was a member of the NSDAP (NSDAP-Nr.: 1.405.562). On 17 April 1933, he became a member of the Allgemeine-SS with the SS membership number 82,857, and reached the rank of SS-Sturmbannführer in 1936. In parallel to his SS career, his military rank in the military reserve force also advanced. He attained the rank of Hauptmann of the Reserves in 1934 (Reichswehr) and a year later became a Rittmeister (cavalry captain) of the Reserves (Wehrmacht).

In WWII, he rose to fame for his command of armored forces. For these services he was awarded the Knight's Cross of the Iron Cross with Oak Leaves, Swords and Diamonds (German: Ritterkreuz des Eisernen Kreuzes mit Eichenlaub, Schwertern und Brillanten), an award created to recognise extreme battlefield bravery or outstanding military leadership. At the time of its presentation to Strachwitz it was Germany's highest military decoration.[3] 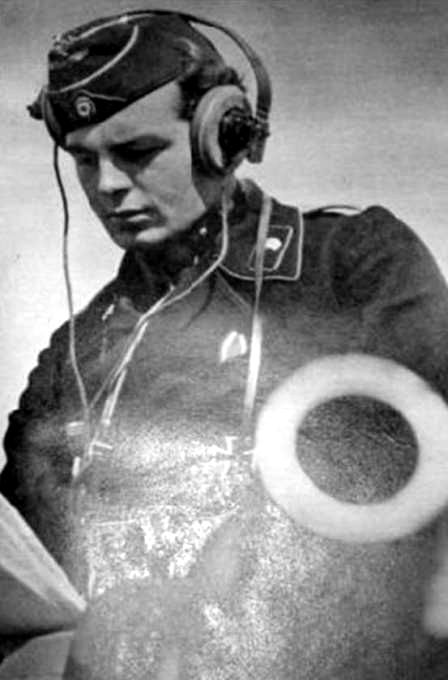 After a month's sick leave, Graf Strachwitz was recalled to active duty and promoted to Generalmajor der Reserve, and was placed in command of the 1st Panzer Division, though for a short period only. In January 1945, Graf Strachwitz, who had been wounded 14 times (9 times very seriously), was promoted once again, this time to "Generalleutnant", the second highest title of the German Army (German: Heer).

Following a visit of the commander of the Panzerjagdverbände of Army Group Vistula, Oberst Ernst-Wilhelm Freiherr Gedult von Jungenfeld, all of the Panzerjagdverbände were to be centralized under Graf Strachwitz' command. In April 1945 the Panzerjagdeinheiten of Army Group Center were all put under his command, this included Panzerjagdverbände A, B and C, the Heeres-Panzerjagdbrigaden 1 and 3, two Volkssturm-Panzerjagdbrigaden and the Panzerjagdbrigaden Niederschlesien (Lower Silesia) and Free Ukrainians. Graf Strachwitz deployed his men in small combat groups, sometimes operating behind enemy lines, which lured enemy tanks into traps and attacked them with Panzerfaust's. Combat reached its peak in April 1945 and some of his men were credited with more than ten enemy tanks destroyed. The German front line of Army Group Center at the time was in mid Silesia along the Zobten, and via Schweidnitz and Jauer to Lauban. The main Soviet thrust was targeted for Berlin and Dresden. This threatened the in Silesia fighting German troops to be encircled. Graf Strachwitz and his men kept on fighting under the command of Schörner until the German capitulation on 8 May 1945.

Graf Strachwitz led his men in a successful and brave breakout from Russian encirclement and partisan terror in Czechoslovakia to the U.S.-held region of Bavaria, where all surrendered to U.S. Army forces near Felgen.[5] Graf Strachwitz was taken to the prisoner of war camp at Allendorf near Marburg, where he was interred together with Franz Halder, Heinz Guderian and fighter ace General of the Luftwaffe Adolf Galland.[6]

Graf Strachwitz was released as a prisoner of war by the Allies in June 1947. He had lost his wife, his youngest son and his estate during the war. He quickly married again and accepted the invitation of Husni al-Za'im to come to Syria as an agricultural and military advisor to the Syrian Armed Forces. This he did from January–June 1949, a period during the 1948 Arab–Israeli War (15 May 1948 – 10 March 1949) which was fought with Syrian involvement. The influential man behind Husni al-Za'im was Adib Shishakli, who wanted a Pan-Arabian revolution and was trying to run the state from behind the scenes. Seeing himself as a state-maker, the Otto von Bismarck of the Arabian peoples, Shishakli's goal was to morph Syria into a kind of Prussian Arabia. He owned a Mercedes car which had once belonged to Adolf Hitler. Under his leadership, Syria brought over 30 advisors to the country.

When Adib Shishakli seized power, Graf Strachwitz and his wife left Syria. In the meantime they had received a visa for Argentina, where they hoped to find another advisory position. Via Lebanon they arrived in Livorno, Italy, where they changed their plans and ran a winery. They returned to Germany in 1951 with a Red Cross passport. The family settled on an estate in Winkl near Grabenstätt in Bavaria, where he lived out his final years quietly and in wealth.

Hyazinth Graf Strachwitz von Groß-Zauche und Camminetz died on 25 April 1968 of lung cancer in the hospital of Trostberg. Der Panzergraf was laid to rest with full military honors (German: Ehrengeleit) in the village cemetery of Grabenstätt, beside his first wife.[7] The Bundeswehr provided an honour guard as a mark of respect. Brigadegeneral and former comrade Heinz-Georg Lemm delivered the eulogy.[8]

Son Hyacinth, at last Hauptmann, was severley wounded in battle, survived the war and died 2003. Leutnant Harti, who had lost a leg but still freely reported back to duty, was killed in action shortly before the end of the war on 25 March 1945 near Holstein. Wife Alda was killed in a traffic accident on 6 January 1946, run over by a US military truck in Velden an der Vils. Graf Strachwitz, still a US prisoner of war in camp Allendorf near Marburg, was denied permission to attend the funeral.

Strachwitz is often credited with the German Cross in Gold awarded on 29 May 1943, this however was awarded to his son, also named Hyacinth, who received this award as Oberleutnant in the 4./Panzer Regiment 15.[21]