Certificate of Recognition of the Commander-in-Chief of the Army 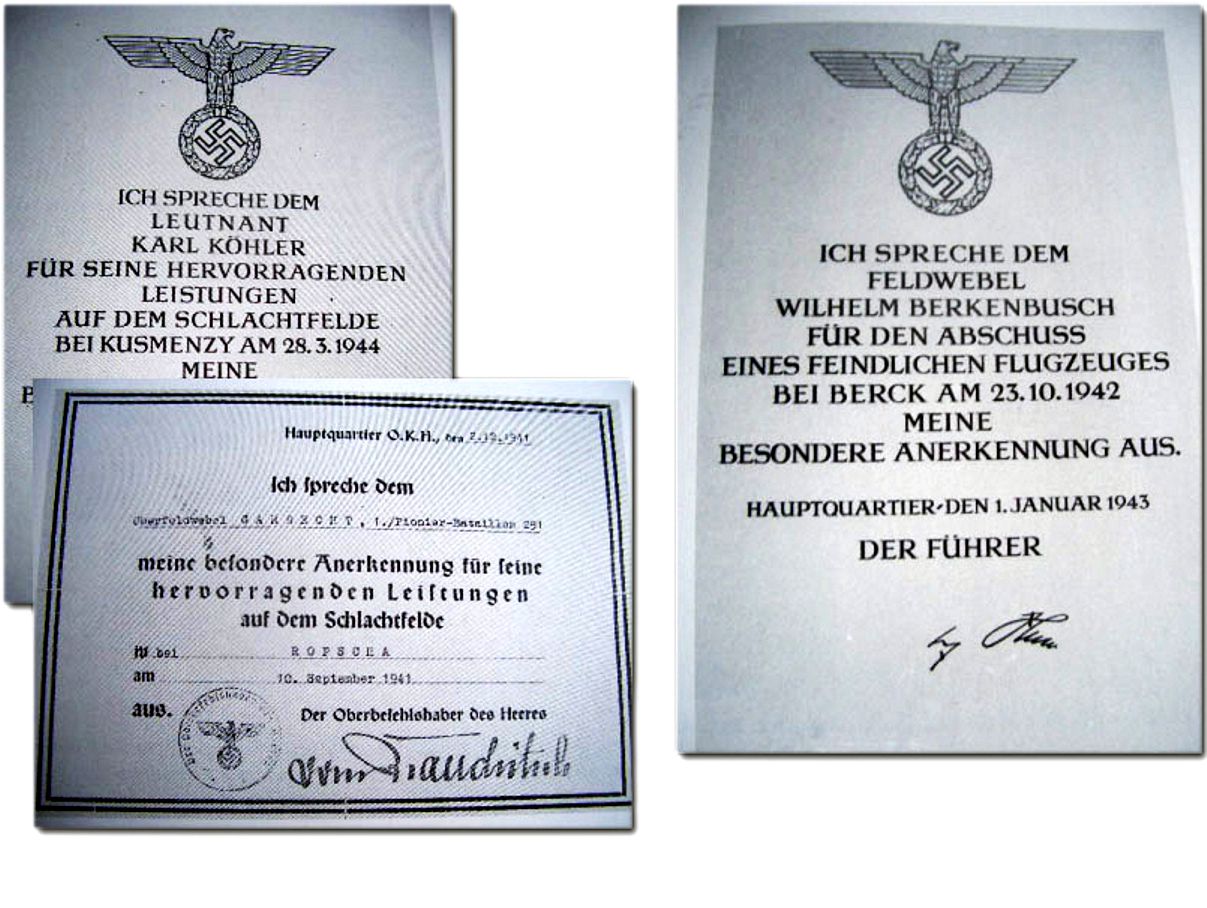 The certificate of recognition was an award that was donated in mid-1941 shortly before the Operation Barbarossa, or immediately after it began, by Generalfeldmarschall Walther von Brauchitsch in his capacity as Commander-in-Chief of the Army (ObdH), granting authority was as of January 1942 Adolf Hitler, since 19 December 1941 officially Commander-in-Chief of the Army (Oberbefehlshaber des Heeres).

This endowment of the award for outstanding achievements on the battlefield probably happened in parallel with the Army Commander-in-Chief's certificate of recognition for aircraft downings. As with his document pedant, the honor was initially intended as a collective award for entire units. However, in the first few weeks of the war against the Soviet Union, this came to be recognized individually by individuals in the army and the Waffen-SS.

The only specific award requirement that could lead to the submission of the application and the later award by the troop superior was the achievement of an outstanding performance by the combat unit or the individual on the battlefield. In practice, however, such outstanding achievements were usually recognized by the commander with state orders and decorations or combat badges. Examples include the Iron Cross 2nd Class, the War Merit Cross with Swords or the General Assault Badge.

The above-mentioned practical interpretation of the combat commanders, who recognized the achievements of their soldiers with medals and decorations, is also reflected in the relatively low number of awards of certificates of recognition. From mid-1941 to the end of the war, the "Certificate of Recognition from the Commander-in-Chief of the Army for Outstanding Achievements on the Battlefield" was only awarded 1,322 times. These included 20 collective awards for troop units and 30 individual awards to members of the Waffen-SS. The rest of 1272 awards were made to individuals in the Wehrmacht.

The "Certificate of Recognition from the Commander-in-Chief of the Army for Downed Enemy Aircraft" was awarded only 591 times from 2 September 1941 until (individually) 15 October 1944 (for an NCO of the schwere Panzer-Abteilung 506) and (collectively) respectively 23 January 1945. 282 soldiers of the Heer, of them 17 officers, received the award. One italien soldier and two individuals from the Organisation Todt and the NSKK as well as eight soldiers of the Waffen-SS Waffen-SS (only one officer) received it also. The rest (306) were awarded collectively to the army, 17 of them to the Waffen-SS.

In January 1945 the certificate was superseded by the Tieffliegervernichtungsabzeichen for shooting down low flying jets with firearms (rifle, machine pistols or machine guns, 2 cm or smaller).