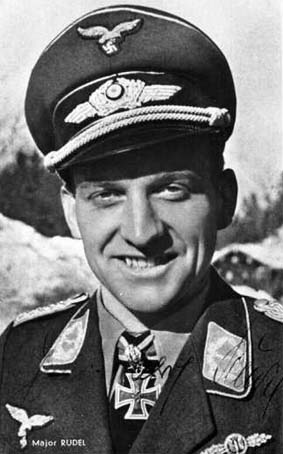 Hans-Ulrich Rudel; After the war, Rudel became a close friend and confidante of the Argentine president Juan Perón Rudel wrote a book titled Trotzdem ("Nevertheless" or "In Spite of Everything"). Even without a leg, he remained an active sportsman, playing tennis, skiing, and even climbing the highest peak in the Americas, Aconcagua (6,962 meters or 22,841 feet). He also ascended the second highest volcano on Earth three times, the Llullay-Yacu in the Argentine Andes (6,739 meters or 22,109 feet). In addition, Rudel's input was used during the development of the A-10 ground attack aircraft.

Hans-Ulrich Rudel (b. 2 July 1916 in Konradswaldau, Landkreis Schönau, Silesia; d. 18 December 1982 in Rosenheim, Bavaria) was a German officer of the Wehrmacht and Stuka dive-bomber pilot of the Luftwaffe during World War II. Rudel is famous for being the most highly decorated German serviceman of the war. Oberst (colonel) Hans-Ulrich Rudel was the only person to be awarded the Knight's Cross of the Iron Cross with Oak Leaves, Swords, Diamonds and Golden Oak Leaves (Ritterkreuz des Eisernen Kreuzes mit Eichenlaub, Schwertern, Brillanten und Goldenem Eichenlaub).

Rudel flew 2,530 combat missions and successfully attacked many tanks, trains, ships, and other ground targets, claiming a total of 2,000 targets destroyed - including 800 vehicles, 519 tanks, 150 artillery guns, a destroyer, two cruisers, a battleship and 9 aircraft which he shot down. 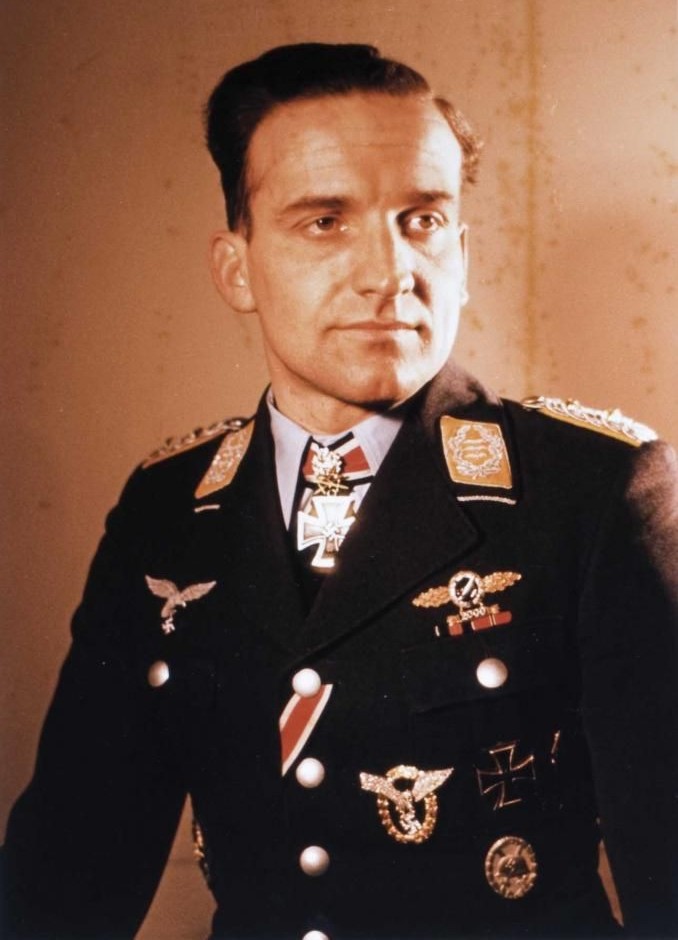 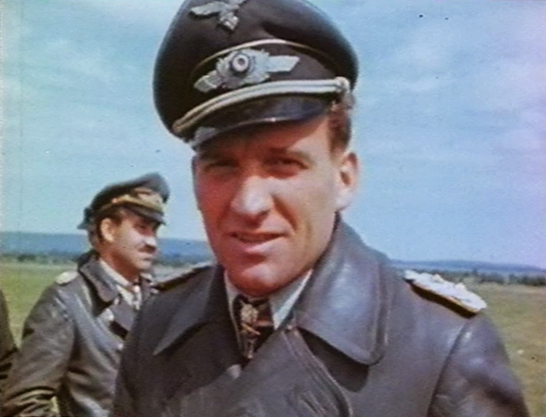 As a boy, Rudel was a keen sportsman. He attended the humanities oriented Gymnasium in Lauban and joined the Hitler Youth in 1932. After graduating with Abitur in 1936, he participated in the compulsory Reich Labour Service (RAD). On 4 December 1936 Rudel joined the Luftwaffe and began his military career as an air reconnaissance pilot. In June 1938 Rudel joined I./Stuka-Geschwader 168 in Graz as an officer senior cadet. Rudel had difficulty learning the new techniques, and with the rest of the unit already fully trained, he was marked as unsuitable as a combat pilot and was transferred for special training in operational reconnaissance at the Reconnaissance Flying School at Hildesheim on 1 January 1939 and promoted to Leutnant on that date. After completing training he was posted to Fernaufklärungsgruppe 121 (Distance Reconnaissance Squadron) at Prenzlau.

As World War II started and during the Polish Campaign he flew long-range reconnaissance missions over Poland from Breslau. Rudel earned the Iron Cross Second Class on October 11, 1939. After a number of requests he was reassigned to dive bombing, joining an Aviation Training Regiment at Crailsheim and then he was assigned to his previous unit, I./StG 3,[3] at Caen in May 1940. He spent the Battle of Britain as an Oberleutnant in a non-combat role. Still regarded as a poor pilot he was returned to a Reserve Flight at Graz for further training and was there confirmed for dive bombing training. Assigned to I./StG 2, based at Molai, his poor reputation preceded him and he also spent the invasion of Crete in a non-combat role. 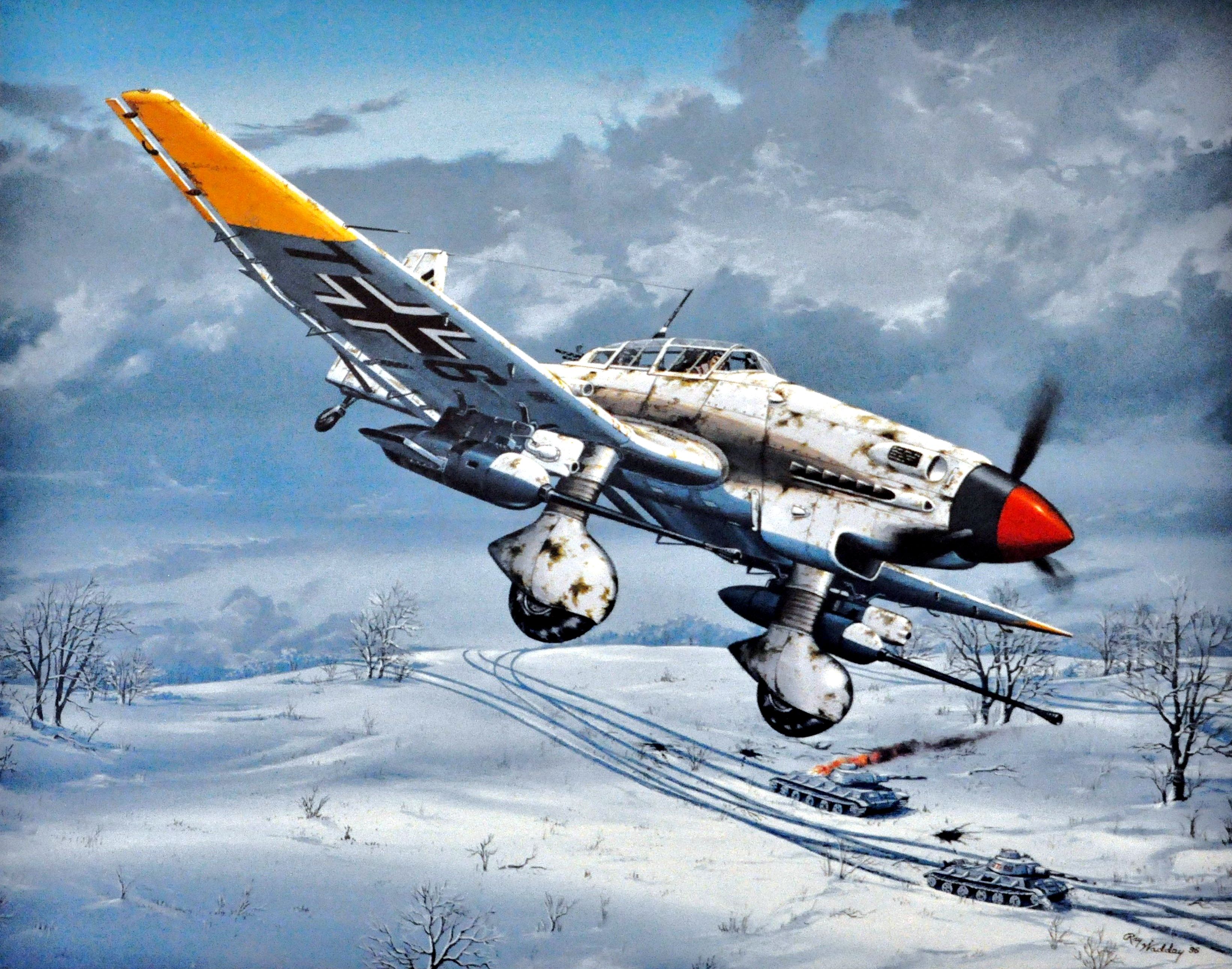 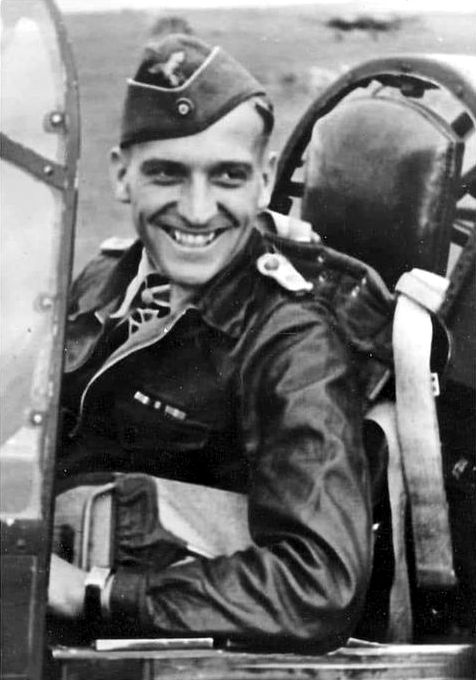 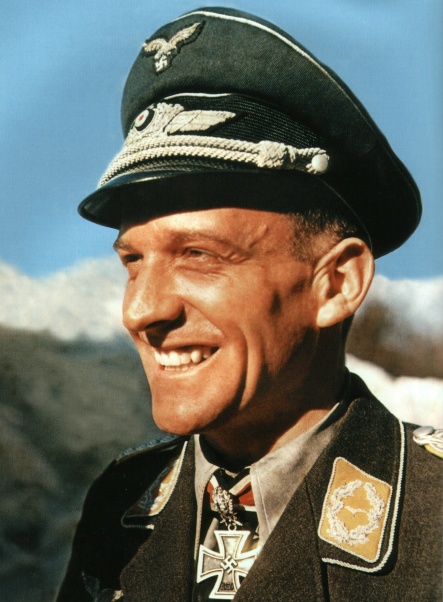 Rudel flew his first four combat missions on 23 June 1941, during the German campaign in the Soviet Union (Operation Barbarossa). His piloting skills earned him the Iron Cross 1st Class on 18 July 1941. On 23 September 1941, he sank the Soviet battleship Marat, during an air attack on Kronstadt harbor in the Leningrad area, with a hit to the bow with a 1,000 kg bomb. By the end of December, he had flown his 400th mission and in January 1942 received the Ritterkreuz. He became the first pilot in history to fly 1,000 sorties on 10 February 1943. Around this time he also started flying anti-tank operations with the 'Kanonenvogel', or G, version of the Ju-87, through the Battle of Kursk, and into the autumn of 1943, claiming 100 tanks destroyed.

By March 1944, he was already Gruppenkommandeur (group commander) of III. Gruppe/StG 2 (appointed on 19 July 1943) and had reached 1,800 operations and having destroyed 202 enemy tanks.

On 13 March 1944, Rudel may have been involved in aerial combat with the Hero of the Soviet Union Lev Shestakov. Shestakov failed to return from this mission and is posted as missing in action since. This is how the story comes from Rudel's memoirs:

"Was he shot down by Gadermann, or did he go down because of the backwash from my engine during these tight turns? It doesn't matter. My headphones suddenly exploded in confused screams from the Russian radio; the Russians have observed what happened and something special seems to have happened... From the Russian radio-messages, we discover that this was a very famous Soviet fighter pilot, more than once appointed as Hero of the Soviet Union. I should give him a credit: he was a good pilot"

In November 1944, he was wounded in the thigh and flew subsequent missions with his leg in a plaster cast. On 8 February 1945, a 40 mm shell hit his aircraft. He was badly wounded in the right foot and crash landed behind German lines. His life was saved by his observer Dr. med. Ernst Gadermann who stemmed the bleeding, but Rudel's leg was amputated below the knee. He returned to operations on 25 March, 1945, claiming 26 more tanks destroyed before the end of the war. Determined not to fall into Soviet hands, he led three Ju 87s and four FW 190s westward from Bohemia in a 2-hour flight and surrendered to U.S. forces on 8 May 1945, after landing at Kitzingen airfield, home to the 405th FG.

Eleven months in hospital followed. Released by the Americans, he moved to Argentina in 1948. 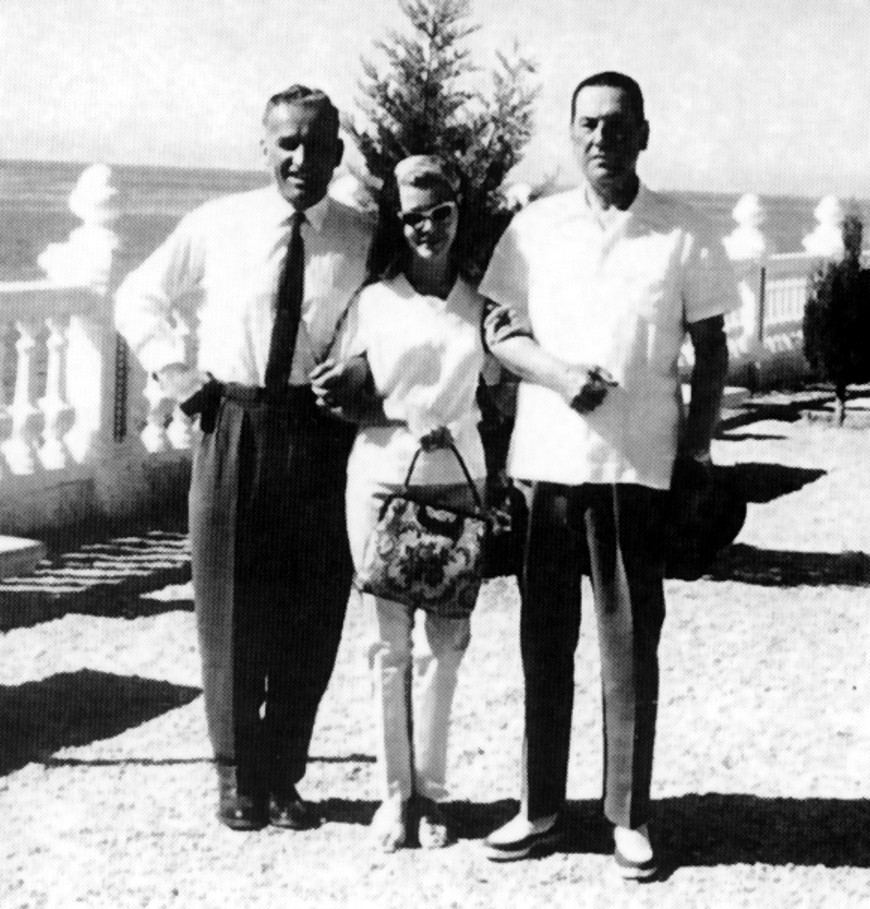 Hans-Ulrich Rudel with Isabel and Juan Perón in Buenos Aires 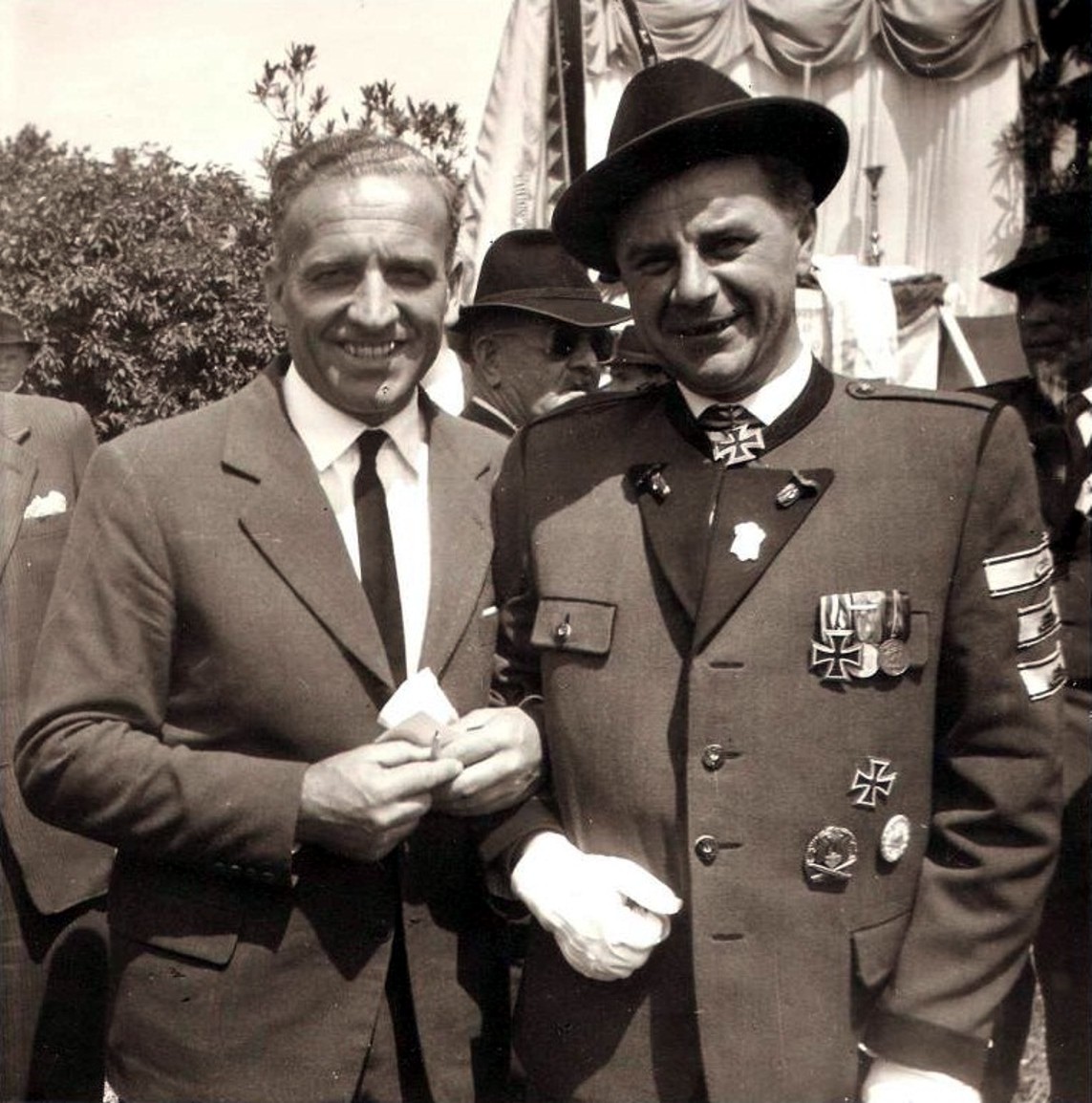 According to official Luftwaffe figures, Rudel flew some 2,530 combat missions or Feindflüge[2] (a world record), during which he destroyed almost 2,000 ground targets:

He was shot down or forced to land 32 times (several times behind enemy lines), but always managed to escape capture despite a 100,000 ruble bounty placed on his head by Stalin himself. He was also wounded five times and rescued six stranded aircrew from enemy territory. The vast majority of his missions were spent piloting the various models of the Junkers Ju 87, though by the end of the war he flew the ground-attack variant of the Fw 190.

He went on to become the most decorated serviceman of all the fighting arms of the German armed forces (the only person to become more highly decorated was Hermann Göring who was awarded the Grand Cross of the Iron Cross), earning by early 1945 the Wound Badge in Gold, the German Cross in Gold, the Pilots and Observer's Badge with Diamonds, the Front Flying Clasp of the Luftwaffe with 2,000 sorties in Diamonds, and the only holder of the Knight's Cross of the Iron Cross with Golden Oak Leaves, Swords, and Diamonds (the highest ace of World War II Erich Hartmann also held the Knight's Cross of the Iron Cross with Oak Leaves, Swords, and Diamonds — but not in gold). He was also promoted to Oberst at this time. He was the only foreigner to be honored with Hungary's highest decoration, the Golden Medal for Bravery.

After the war, Rudel became a close friend and confidante of the Argentine president Juan Perón. Here he would also meet his old comrades Werner Baumbach and Adolf Galland. Rudel wrote a war diary entitled "Trotzdem" (English version Stuka Pilot, translated by Lynton Hudson) that described the task of the Sturzkampflieger of the Luftwaffe during the Operation Barbarossa. Even without a leg, he remained an active sportsman, playing tennis, skiing, and even climbing the highest peak in the Americas, Aconcagua (6,962 meters or 22,841 feet). He also ascended the second highest volcano on Earth three times, the Llullay-Yacu in the Argentine Andes (6,739 meters or 22,109 feet). In addition, Rudel's input was used during the development of the A-10 ground attack aircraft, developed by Fairchild Republic for the United States Air Force (USAF).

Hans-Ulrich Rudel died in Rosenheim in 1982 and was buried in Dornhausen. Thousands of men, women, youths and children mourned the German hero. The Bundeswehr had forbidden any soldiers of the armed forces to attend the funeral in uniform, but many did. Two pilots of the new Luftwaffe flew very low over the cemetery with their McDonnell F-4 Phantoms II to honor their comrade.

Rudel was the third child of Lutheran minister Johannes Rudel. He was married three times, all his wives were named Ursula: 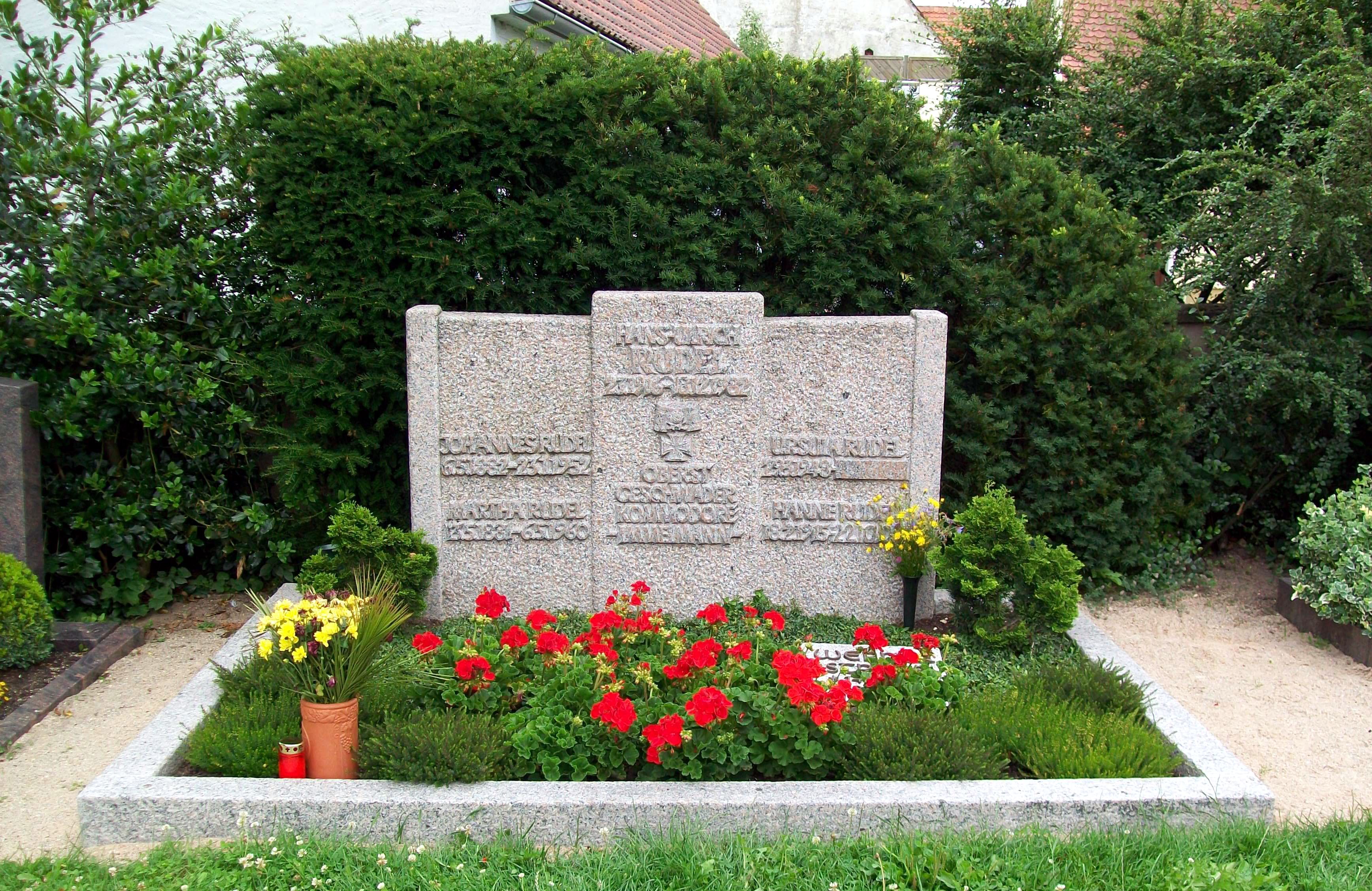