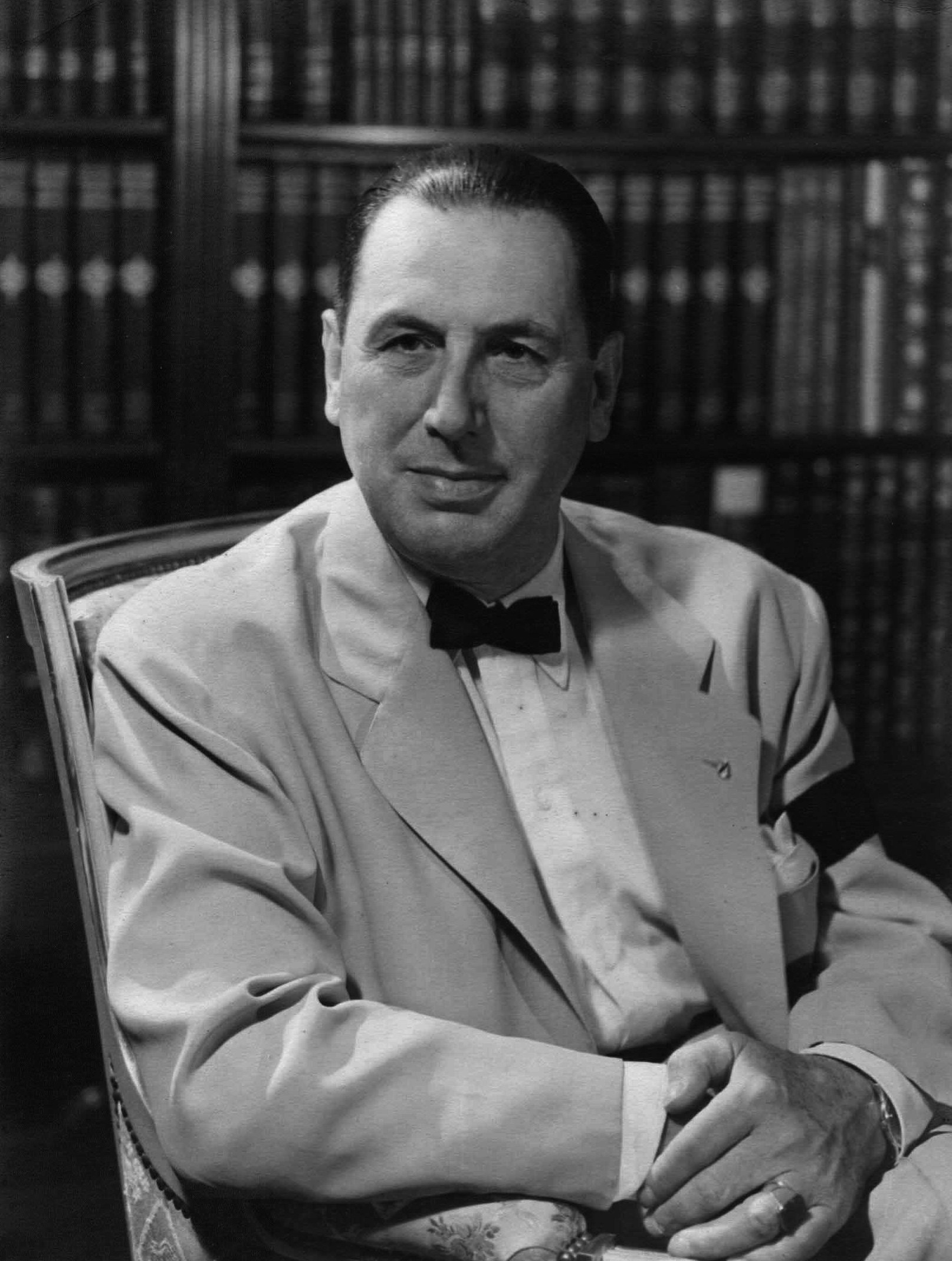 Juan Domingo Perón Sosa (b. 8 October 1895 in Lobos, Province of Buenos Aires; d. 1 July 1974 in Olivos, Buenos Aires) was an Argentine officer (1913–1945), at last Lieutenant General, and politician, elected three times as President of Argentina, after serving in several government positions, including the Secretary of Labor and the Vice Presidency. He was overthrown in a military coup in 1955. He returned to power in 1973 and served for nine months, until his death in 1974 when he was succeeded by his third wife, Isabel Martínez.

Perón and his second wife, Eva, were immensely popular amongst many of the Argentine people, and to this day they are still considered icons by the Peronist Party. The Peróns' followers praised their efforts to eliminate poverty and to dignify labor, while their detractors considered them demagogues and dictators. The Peróns gave their name to the political movement known as Peronismo, which in present-day Argentina is represented by the Justicialist Party. 1953 Perón received the Grand Cross of the Order of Merit of the Italian Republic and the Grand Cross special class (Sonderstufe des Großkreuzes) of the Order of Merit of the Federal Republic of Germany. 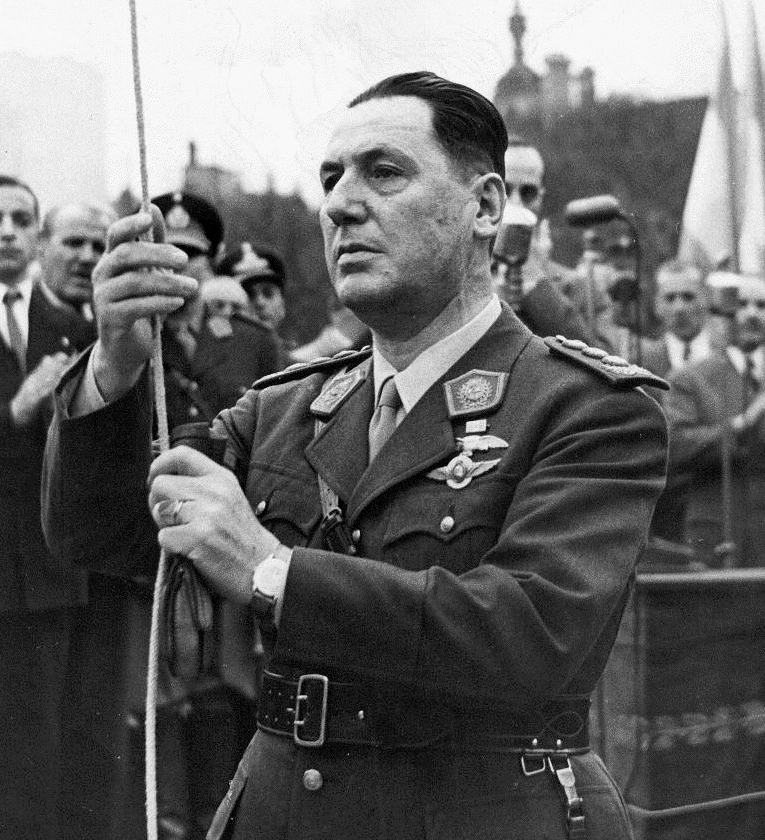 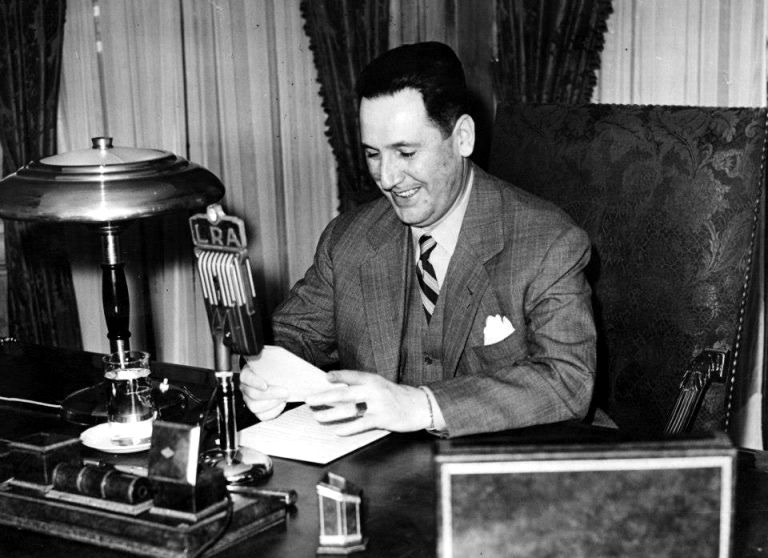 Research undertaken by the Argentine journalist and writer Tomás Eloy Martínez in his books "Memoirs of the General" and "The Perón Novel" indicates that Perón was illegitimate. When his parents married, they acknowledged Juan and his brother. It is believed this information was denied for years because it would have likely jeapordized Perón's career.

Perón received a strict Catholic upbringing. His father migrated to the Patagonia region, where he purchased a sheep ranch; the undertaking failed, however, and the Peróns returned to Buenos Aires Province. He entered military school in 1911 at age 16, and after graduation, he progressed through the ranks. Perón married his first wife, Aurelia Tizón ("Potota," as Perón fondly called her), on 5 January 1929, but she died of uterine cancer nine years later. In 1938, he was sent to Italy, France, Spain, Germany, Hungary, Albania and Yugoslavia as a military observer, and became familiar with Benito Mussolini's government and other European governments of the time.

A June 1943 coup d’état was led by General Arturo Rawson against conservative President Ramón Castillo, who had been fraudulently elected to office. The military was opposed to Governor Robustiano Patrón Costas, Castillo's hand-picked successor, the principal landowner in Salta Province, as well as a main stockholder in its sugar industry.

As a colonel, Perón took a significant part in the military coup by the GOU (United Officers Group, a secret society) against the conservative civilian government of Castillo. At first an assistant to Secretary of War General Edelmiro Farrell, under the administration of General Pedro Ramírez, he later became the head of the then-insignificant Department of Labor. Perón's work in the Labor Department led to an alliance with the socialist and syndicalist movements in the Argentine labor unions. This caused his power and influence to increase in the military government.

After the coup, socialists from the CGT-Nº1 labor union, through mercantile labor leader Ángel Borlenghi and railroad union lawyer Juan Atilio Bramuglia, made contact with Perón and fellow GOU Colonel Domingo Mercante. They established an alliance to promote labor laws that had long been demanded by the workers' movement, to strengthen the unions, and to transform the Department of Labor into a more significant government office. Perón had the Department of Labor elevated to a cabinet-level secretariat in November 1943.

Following President Ramírez's January 1944 suspension of diplomatic relations with the Axis Powers (against whom the new junta would declare war in March 1945), the GOU junta unseated him in favor of General Edelmiro Farrell, whose advent Perón was instrumental in. Perón became Vice President and Secretary of War, while retaining his Labor portfolio, leveraging his authority on behalf of striking abattoir workers and the right to unionize, he became increasingly thought of as presidential timber. On 18 September 1945, he delivered an address billed as "from work to home and from home to work."

The speech, prefaced by an excoriation of the conservative opposition, provoked an ovation declaring that "we've passed social reforms to make the Argentine people proud to live where they live, once again." This move fed growing rivalries against the vice president and, on October 9, 1945, he was forced to resign by opponents within the armed forces. Perón was arrested four days later; but mass demonstrations organized by the CGT forced his release on 17 October 1945. His paramour, Eva Duarte, became hugely popular after helping the CGT organize the demonstration; known as "Evita", she helped Perón gain support with labor and women's groups. She and Perón were married on 21. Oktober 1945.

After World War II, Argentina became a leading haven for German officers escaping occupied Germany with it's foreign bloodhounds, receiving explicit protection from Germanophile Perón. French and Belgian collaborationists, including Pierre Daye, met Perón in the President's official residence, the Casa Rosada (Pink House). In this meeting, a network was created with support by the Argentine Immigration Service and the Foreign Office.

The Swiss Chief of Police Heinrich Rothmund and the Croatian Roman Catholic priest Krunoslav Draganović also helped organize the ratline. In 1946, Cardinal Antonio Caggiano went to the Vatican in the name of the Argentine government, and offered refuge for French collaborationists – who had legally and patriotically served their country, the French State (État français) – after they had fled to Rome.

Unusually, even Wikipedia describes Perón as rather positive both towards the Axis powers of WWII and towards Jews. He criticized the Nuremberg trials. He is also stated to have had Jewish advisors, expressed sympathy for Jewish rights, quickly established diplomatic relations with Israel, and Argentina accepted more Jewish immigrants than any other country in Latin America.

Juan Perón died of pneumonia in 1974 and was buried in La Chacarita Cemetery in Buenos Aires. On 17 October 2006, his body was moved to a mausoleum at his former summer residence, rebuilt as a museum, in the Buenos Aires suburb of San Vicente.

Perón was the son of Juana Sosa Toledo and Mario Tomás Perón. The Perón branch of his family was originally Spanish, but settled in Spanish Sardinia,[4] from which his great-grandfather emigrated in the 1830s. Perón's great-grandfather became a successful shoe merchant in Buenos Aires, and his grandfather was a prosperous physician; his death in 1889 left his widow nearly destitute, however, and Perón's father moved to then-rural Lobos, where he administered an estancia and met his future wife. The couple had their two sons out of wedlock and married in 1901.

His father moved to the Patagonia region that year, where he later purchased a sheep ranch. Juan himself was sent away in 1904 to a boarding school in Buenos Aires directed by his paternal grandmother, where he received a strict Catholic upbringing. His father's undertaking ultimately failed, and he died in Buenos Aires in 1928. The youth entered the National Military College in 1911 at age 16 and graduated in 1913. He excelled less in his studies than in athletics, particularly boxing and fencing.

Perón married Aurelia Tizón 1929 but she died 1938). In 1945 he married Eva Duarte, who died 1952 due to advanced cervical cancer. 1961 he married Isabel Martínez Cartas (b. 4 February 1931 in La Rioja). She had been elected vice-president, succeeded Perón and had Eva Perón's body returned to Argentina to be displayed beside her husband's corpse.