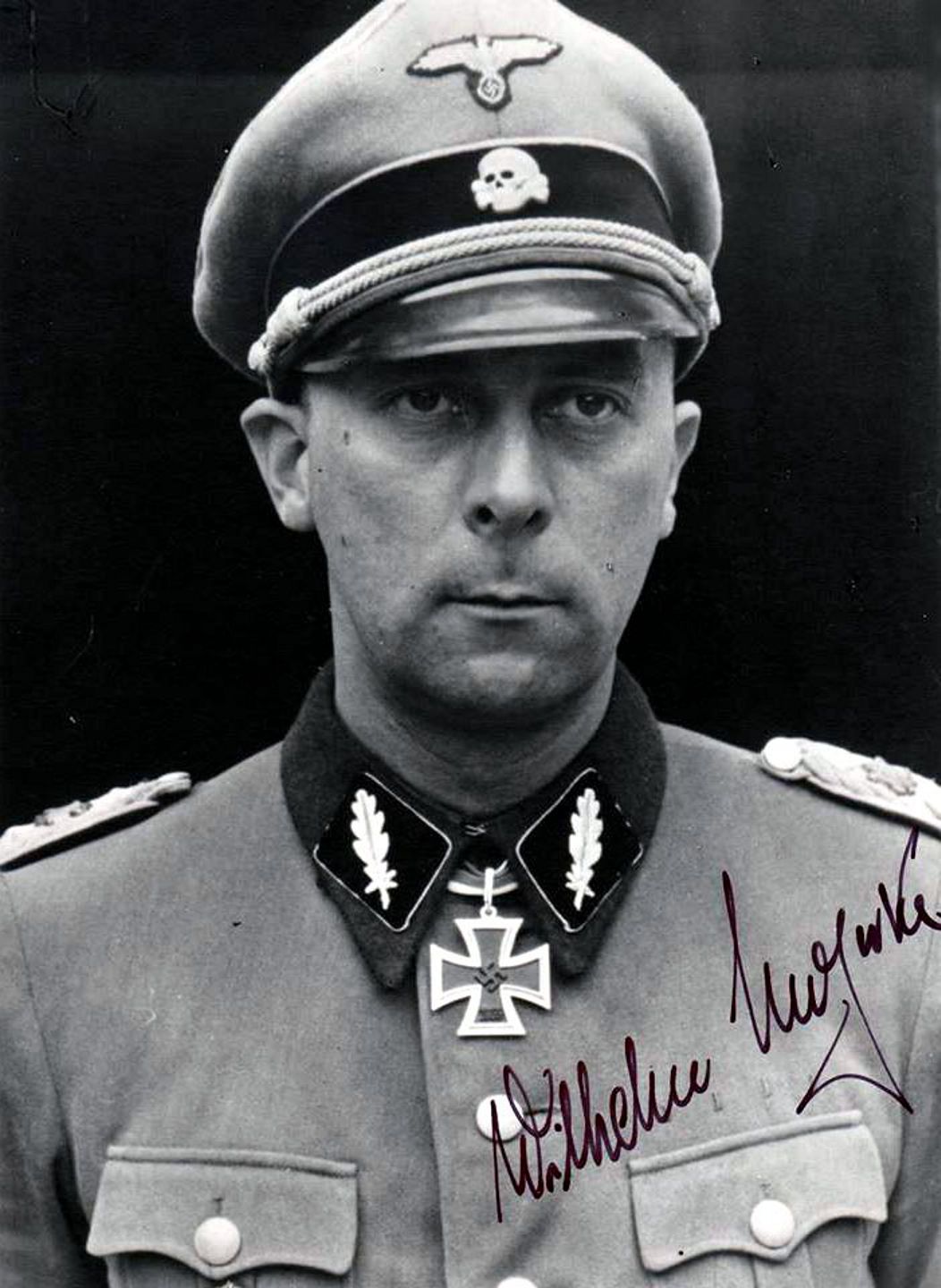 Wilhelm Heinrich Johannes Mohnke (b. 15 March 1911 in Free City of Lübeck, German Empire; d. 6 August 2001 in Damp near Eckernförde, Schleswig-Holstein) was one of the original 120 members of the SS-Staff Guard (Stabswache) "Berlin" formed in March 1933. From those ranks, Mohnke was to rise to become one of Adolf Hitler's last remaining generals.

Mohnke saw action while serving with the Infantry Regiment Leibstandarte SS Adolf Hitler in Poland and the Balkans. After several failed attempts to introduce a Panzer arm to the Leibstandarte, he was transferred to a replacement battalion until he was given command of a regiment in the 12th SS Panzer Division Hitlerjugend. It was with this regiment that he fought in the Battle for Caen. For his superior conduct in battle, he received the Knight's Cross on 11 July 1944. After participating in most of the French campaign, he was given command of his original division, the Leibstandarte, for Operation Wacht Am Rhein, which commenced on 16 December 1944. He served until the very last day of the war in Europe; during the Battle of Berlin, he commanded Kampfgruppe Mohnke and was charged with defending the Berlin government district, including the Reichstag (nicknamed Die Zitadelle or The Citadel). 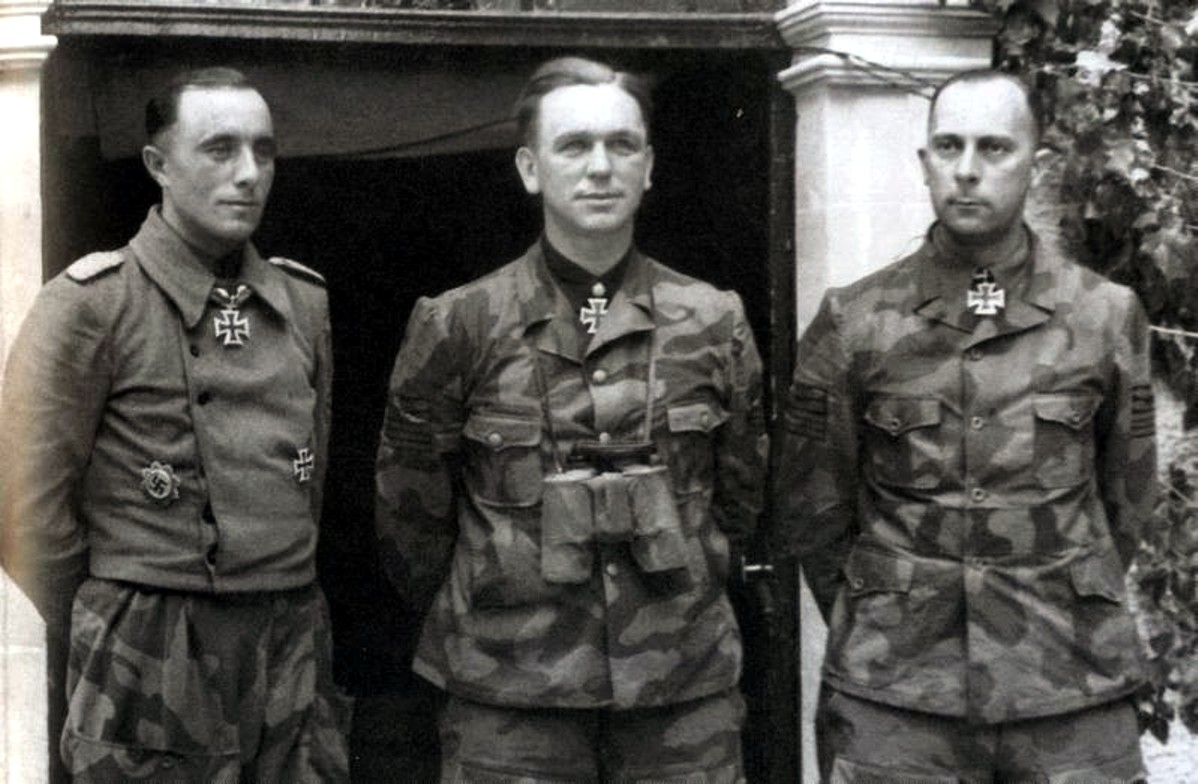 Mohnke led 5th company of the 2nd Battalion Infantry Regiment Leibstandarte SS Adolf Hitler at the outset of the Battle of France in 1940, taking over command of 2nd Battalion on 28 March after the Battalion commander was wounded. It was around this time that Mohnke was allegedly involved in the murder of 80 British prisoners of war (POWs) of the 48th Division near Wormhoudt. Mohnke was never brought to trial for these allegations, and when the case was reopened in 1988, a German prosecutor came to the conclusion that there was insufficient evidence to bring charges.

Four years later, Mohnke's name was again mentioned in connection with war crimes, this time as the commander of 1st SS Division Leibstandarte SS Adolf Hitler (LSSAH), where units under his command were charged with the Malmedy massacre. It is also alleged that Mohnke was responsible for the murder of 35 Canadian POWs while with the Hitlerjugend division at Fountenay le Pesnel.

He commanded the 2nd Battalion during the Balkan campaign, where he lost a foot in a Yugoslavian air attack on 6 April 1941, the first day of the campaign. It was the decision of the medics that his leg would need to be amputated, but Mohnke overrode that decision. His wound was so grievous that they were still forced to remove his foot. While recuperating he was awarded the German Cross in Gold due to the severity of his injury.

It was Mohnke who planted the seed for the formation of the LSSAH Panzerabteilung early in 1942 after returning to active service. He appointed Ralf Tiemann as his adjutant, whose first official task was finding recruits. Tiemann than proceeded to compile a list, eventually with enough names to fill two companies. While the newly wed Sepp Dietrich presented his new wife to his officers on 14 January, Mohnke presented divisional commander Sepp Dietrich with his personnel list, which had in the mean time turned into transfer orders. Dietrich, who was caught unaware, finally relented to Mohnke's pressure and signed the paper. So was born the Panzerwaffe of the Leibstandarte "Adolf Hitler". It was not to be though, and Mohnke was relieved of his command and transferred to the replacement battalion on 16 March 1942.

After recovery from his wounds, Mohnke was personally appointed by Hitler as the commander (kommandant) of the Reichs Chancellery defense. He formed Kampfgruppe Mohnke out of 9 SS Battalions, including the remnants of LSSAH Wach Regiment, LSSAH Ausbildungs-und Ersatz Battalion from Spreenhagenm, and the Führer-Begleit-Kompanie and the Reichsführer SS Begleit Battalion. Although Hitler had appointed General Helmuth Weidling as defense commandant of Berlin, Mohnke remained free of Weidling's command to maintain his defense objectives of the Reich Chancellery and the Führerbunker.

Since his fighting force was located at the nerve center of the German Third Reich it fell under the heaviest artillery bombardment of the war which began on 20 April 1945 and lasted to the end of the war on 8 May 1945. Under the pressure of the most intense shelling of the war, Mohnke led his SS troops to put up an extremely stiff resistance against impossible odds. The combined total of his SS Kampfgruppe and General Weidling's LVI Panzer Corps totaled 250,000 men and 700 AFV against the 2.5 million men of three Russian army groups.

The Russian race to take the control of the Reich Chancellery condemned Mohnke's men to bitter and bloody street to street fighting. Completely encircled and cut off from reinforcements, without hope of relief or withdrawal, his Kampfgruppe fought off the Russian advances, inflicting heavy and costly casualties.

While the Battle of Berlin was raging around them, Hitler ordered Mohnke to set up a military tribunal for Hermann Fegelein, adjutant to Heinrich Himmler, in order to try the man for desertion. Mohnke, deciding that the Obergruppenführer deserved a fair trial by other high ranking officers, put together a tribunal consisting of Generals Hans Krebs, Wilhelm Burgdorf, Johann Rattenhuber, and himself. Following a failed attempt to try Fegelein, and finding him completely flagrant and belligerent and not in a right state of mind to stand trial, Mohnke dismissed the case and released him to General Rattenhuber.

With the news of Hitler's death, many of his remaining top officials, including Mohnke, planned to escape out of Berlin to the Allies waiting on the west side of the Elbe. These "survivors" split up into three groups with Mohnke leading the first group. Mohnke's group left the Fuhrerbunker on 1 May and included Hitler's personal pilot, Hans Baur, the chief of his bodyguard, Hans Rattenhuber, secretary Traudl Junge, secretary Gerda Christian, secretary Else Krüger, Hitler's dietician, Constanze Manziarly, Dr. Ernst-Günther Schenck, and various others. Mohnke planned to break out towards the German army that was positioned in Prinzenallee. The group was captured hiding in a cellar by the Soviets on the morning of 2 May.

Later on 2 May 1945, General Weidling ordered the complete surrender of all resisting German forces still remaining in Berlin. However Mohnke's SS personnel kept up pockets of resistance throughout the city. Some pockets resisted until the formal surrender of Germany on 8 May 1945.

Mohnke was captured by the Soviets while leading his group of survivors after breaking out from the Führerbunker. He was imprisoned in solitary confinement until 1949, then transferred to the Generals' Prison in Woikowo. He remained in captivity until 10 October 1955. Following his release, he worked as a dealer in small trucks and trailers, living in Barsbüttel, Germany.

Despite a campaign, led by the British socialist Member of Parliament Jeff Rooker, to prosecute him for his alleged involvement in "war crimes" during the early part of the war, Wilhelm Mohnke lived out the remainder of his years in peace.

Mohnke died in the coastal village of Damp, near Eckenförde in Schleswig-Holstein in August 2001, at the age of 90.