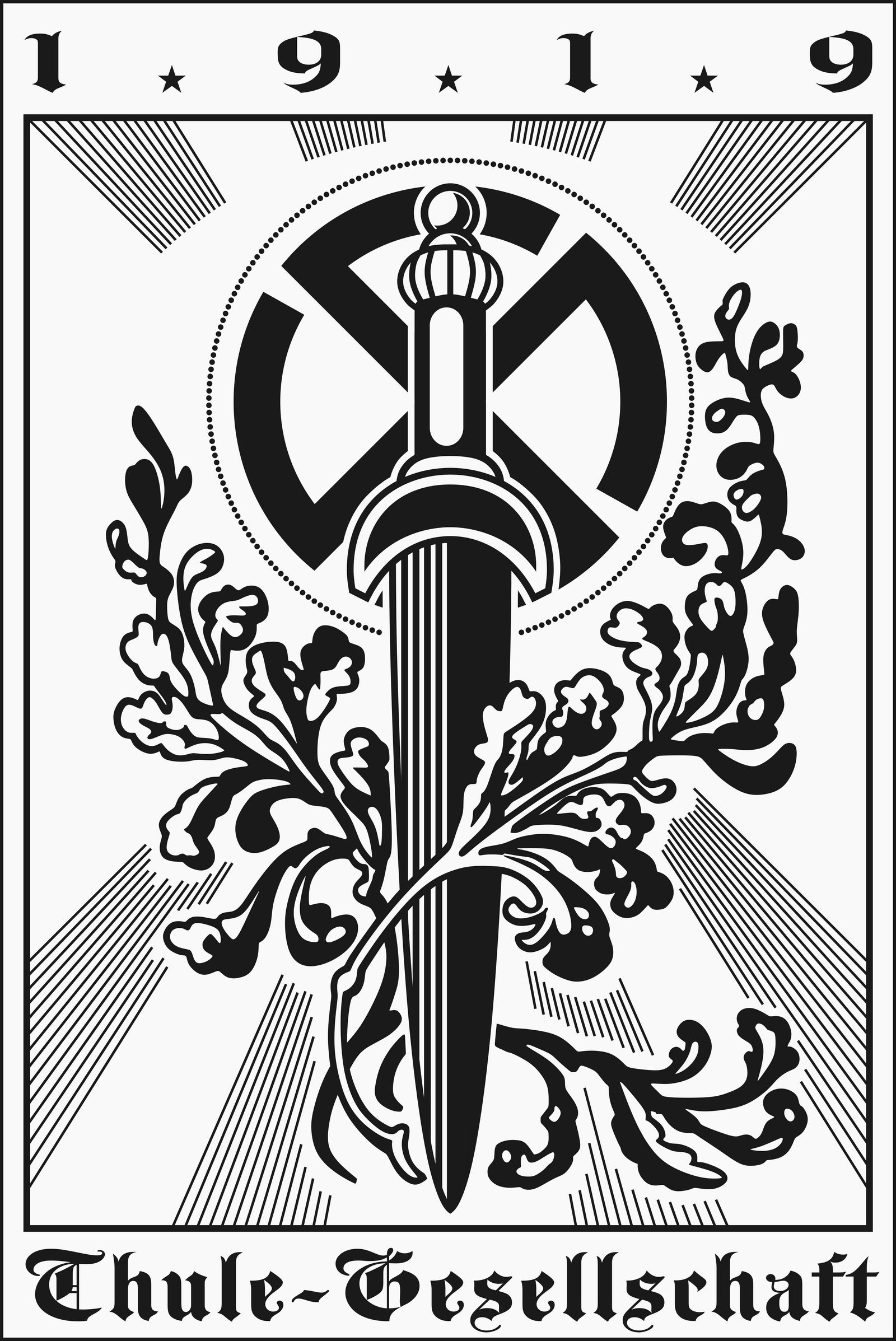 The Thule Society (German: Thule-Gesellschaft), originally the Study Group for Germanic Antiquity, was a völkisch and occult-influenced organization created after World War I in Munich. The Thule Society was disbanded around 1925 because of declining membership and the overall hostility of the Weimar Republic. According to Greek and Roman tradition Thule was an island the furthermost north.

The Society is notable chiefly as the organization that sponsored the Deutsche Arbeiterpartei (DAP), which was later reorganized by Adolf Hitler into the National Socialist German Workers' Party (NSDAP). According to Hitler biographer Ian Kershaw, the organization's membership list reads like a Who's Who of early party members including Rudolf Hess, Alfred Rosenberg, Hans Frank, Julius Lehmann, Gottfried Feder, Dietrich Eckart and Karl Harrer.[1] However, Nicholas Goodrick-Clarke, an expert on the Thule Society, finds that while Hans Frank and Rudolf Hess had been Thule members, other early party members had only been guests of the Thule Society or entirely unconnected with it.[2][3] There is no evidence that Hitler ever attended meetings of the Thule Society.[4]

The Thule Society was originally a "German study group" headed by Walter Nauhaus,[5] a wounded World War I veteran turned art student from Berlin who had become a keeper of pedigrees for the Germanenorden (or "Order of Teutons"), a secret society founded in 1911 and formally named in the following year.[6] In 1917 Nauhaus moved to Munich; his Thule-Gesellschaft was to be a cover-name for the Munich branch of the Germanenorden,[7] but events developed differently as a result of a schism in the Order. In 1918, Nauhaus was contacted in Munich by Rudolf von Sebottendorf (or von Sebottendorff), an occultist and newly elected head of the Bavarian province of the schismatic offshoot, known as the Germanenorden Walvater of the Holy Grail.[8] The two men became associates in a recruitment campaign, and Sebottendorff adopted Nauhaus's Thule Society as a cover-name for his Munich lodge of the Germanenorden Walvater at its formal dedication on 18 August 1918.[9]

A primary focus of Thule-Gesellschaft was a claim concerning the origins of the Aryan race. In 1917 people who wanted to join the "Germanic Order", out of which the Thule Society developed in 1918, had to sign a special "blood declaration of faith" concerning the lineage:

"The signer hereby swears to the best of his knowledge and belief that no Jewish or coloured blood flows in either his or in his wife's veins, and that among their ancestors are no members of the coloured races."[10]

"Thule" ((Greek): Θούλη) was a land located by Greco-Roman geographers in the furthest north (often displayed as Iceland).[11] The term "Ultima Thule" ((Latin): most distant Thule) is also mentioned by the Roman poet Virgil in his pastoral poems called the Georgics.[12] Although originally Thule was probably the name for Scandinavia, Virgil simply uses it as a proverbial expression for the edge of the known world, and his mention should not be taken as a substantial reference to Scandinavia.[13]

They identified Ultima Thule, said by National Socialist mystics to be the capital of ancient Hyperborea, as a lost ancient landmass in the extreme north: near Greenland or Iceland. These ideas derived from earlier speculation by Ignatius L. Donnelly that a lost landmass had once existed in the Atlantic, and that it was the home of the Aryan race, a theory he supported by reference to the distribution of swastika motifs. He identified this with Plato's Atlantis, a theory further developed by Helena Blavatsky, an occultist during the second part of the 19th century.

The Thule Society attracted about 250 followers in Munich and about 1,500 in greater Bavaria.[14] Its meetings were often held in the luxury Hotel Vierjahreszeiten (Four Seasons Hotel) in Munich.[9]

The followers of the Thule Society were, by Sebottendorff's own admission, little interested in occultist theories, instead they were interested in politics and combating Jews and Communists. Sebottendorff planned and failed to kidnap the socialist Jewish Bavarian prime minister Kurt Eisner in December 1918.[5][15] During the Bavarian Soviet Republic in April 1919, Thulists were accused of trying to infiltrate its government and of attempting a coup. On 26 April the government in Munich raided the Society's premises and took seven of its members into custody, executing them on 30 April. Amongst them were Walter Nauhaus and four well-known aristocrats including Countess Heila von Westarp, who functioned as the group's secretary, and Prince Gustav of Thurn and Taxis who was related to several European royal families.[16][17] In response, the Thule organised a citizens' uprising as White troops entered the city on 1 May.[18]

On 5 January 1919 Anton Drexler, who had developed links between the Thule Society and various extreme right workers' organizations in Munich, together with the Thule Society's Karl Harrer, established the Deutsche Arbeiterpartei (DAP), or German Workers' Party. Adolf Hitler joined this party later in the same year. By the end of February 1920, the DAP had been reconstituted as the National Socialist German Workers' Party, generally known as the NSDAP.[19]

Sebottendorff had by then left the Thule Society, and never joined the DAP or the NSDAP. Dietrich Bronder (Bevor Hitler kam, 1964) alleged that other members of the Thule Society were later prominent in the Third Reich: the list includes Dietrich Eckart (who Hitler had Mein Kampf dedicated to him) as well as Gottfried Feder, Hans Frank, Hermann Göring, Karl Haushofer, Rudolf Hess, Heinrich Himmler and Alfred Rosenberg.[20] Historian Nicholas Goodrick-Clarke has described this membership roll and other, similar claims as "spurious" and "fanciful", noting that Feder, Eckart and Rosenberg were never more than guests to whom the Thule Society extended hospitality during the Bavarian revolution of 1918,[21] although he has more recently acknowledged that Hess and Frank were members of the Society before they came to prominence in the NSDAP.[22] It has also been claimed that Adolf Hitler himself was a member.[23] Evidence on the contrary shows that he never attended a meeting, as attested to by Johannes Hering's diary of Society meetings.[4] It is quite clear that Hitler himself had little interest in, and made little time for, "esoteric" matters.[24] (See also Hitler's Nuremberg speech of 6 September 1938 on his disapproval of occultism.)

Wilhelm Laforce and Max Sesselmann (staff on the Münchener Beobachter) were Thule members who later joined the NSDAP.[5]

Early in 1920, Karl Harrer was forced out of the DAP as Hitler moved to sever the party's link with the Thule Society, which subsequently fell into decline and was dissolved about five years later,[20] well before Hitler came to power.

Rudolf von Sebottendorff had withdrawn from the Thule Society in 1919, but in 1933 he returned to Germany in the hope of reviving it. In that year he published a book entitled Bevor Hitler kam (Before Hitler Came), in which he claimed that the Thule Society had paved the way for the Führer: "Thulers were the ones to whom Hitler first came, and Thulers were the first to unite themselves with Hitler." This claim was not favourably received by the German government: after 1933, esoteric organisations (including völkisch occultists) were suppressed, many closed down by anti-Masonic legislation in 1935. Sebottendorff's book was prohibited and he himself was arrested and imprisoned for a short period in 1934, afterwards departing into exile in Turkey.

Nonetheless, it has been argued that some Thule members and their ideas were incorporated into the Third Reich.[23] Some of the Thule Society's teachings were expressed in the books of Alfred Rosenberg.[25] Many occult ideas found favour with Heinrich Himmler who, unlike Hitler, had a great interest in mysticism, but the Schutzstaffel (SS) under Himmler emulated the structure of Ignatius Loyola's Jesuit order[26] rather than the Thule Society.

Like the Ahnenerbe section of the SS, and due to its occult background, the Thule Society has become the center of many alternative history narratives concerning the Third Reich.[27]