Dietrich Eckart (23 March 1868 – 26 December 1923) was a German poet, playwright, and journalist. He was early member of the National Socialist German Worker's Party and a participant of the 1923 Munich Putsch. An anti-Semite, a critic of the Weimar Republic, and a proponent of the stab-in-the-back theory, Eckart is stated to have had an influence on Adolf Hitler. He has been variously described as a "Christian fascist" and/or as having been influenced by various esoteric views, including the Thule Society, although not a member. 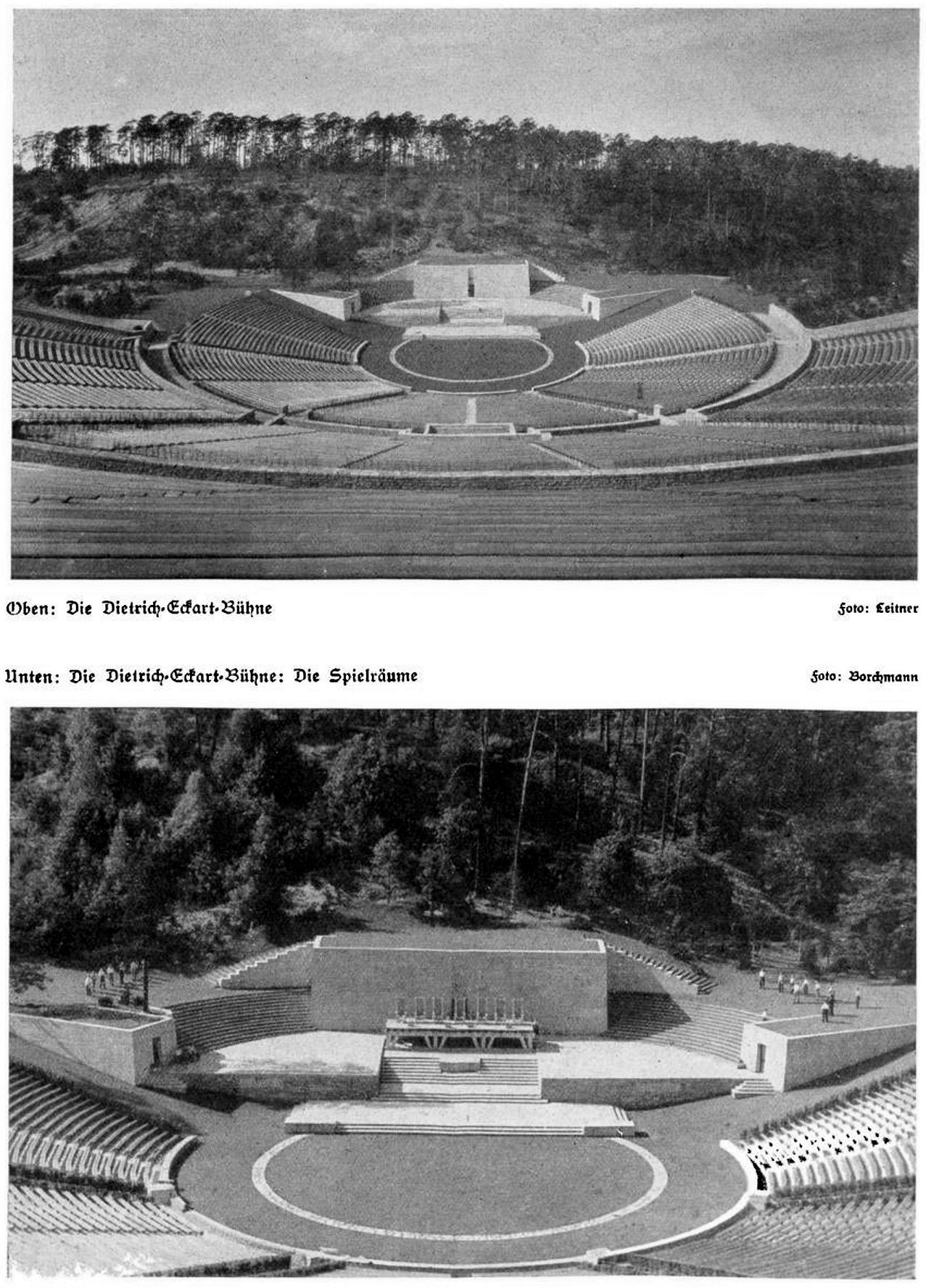 The amphitheater "Dietrich-Eckart-Freilichtbühne" was built in 1936 as part of the construction work for the Olympic Sommer Games north-west of the former Reichssportfeld under the direction of the architect Werner March according to plans by Konrad Robert Heidenreich. After WWII, the theater was renamed "(Berliner) Waldbühne".

Eckart was born in Neumarkt, Germany (near Nuremberg) in 1868, the son of a royal notary and lawyer. His mother died when he was ten years old; in 1895, his father died also, leaving him a considerable amount of money that Eckart soon spent.

Eckart initially studied medicine in Munich, but quit in 1891 to work as a poet, playwright and journalist. He moved to Berlin in 1899, where he wrote a number of plays, often autobiographical; however, despite becoming the protégé of Georg Graf von Hülsen-Haeseler (1858–1922), the artistic director of the royal theatre, he was not very successful as a playwright.

Later on, he developed an ideology of a "genius higher human", based on writings by Lanz von Liebenfels; he saw himself following the tradition of Arthur Schopenhauer and Angelus Silesius. He also became fascinated by the Buddhist doctrine of Maya (illusion). Eckart loved and strongly identified with Henrik Ibsen's Peer Gynt, but never had much sympathy for the scientific method. He was an occultist, interested in Germanic mythology and magic.

Between 1918 and 1920, Eckart edited the anti-semitic periodical Auf gut Deutsch, published along with Alfred Rosenberg and Gottfried Feder. A fierce critic of the Weimar Republic, he vehemently opposed the Treaty of Versailles, which he viewed as treason, and believed the Social Democrats and Jews were to blame for Germany's defeat in World War I.

Eckart met Adolf Hitler during a speech he gave before party members on 14 August 1919. He exerted considerable influence on Hitler in the following years and is strongly believed to have established the theories and beliefs of the National Socialist party. It was Eckart who introduced Alfred Rosenberg to Adolf Hitler.

In 1921, Eckart promised a reward of 1,000 Reichsmarks to anyone who could name a German Jewish family whose sons had been at the front as members of the Imperial German Army for more than three weeks. The Chief Rabbi Samuel Freund from Hanover named 20 Jewish families to whom this applied and sued Eckart when he refused the reward. In the process, Freund named another 50 Jewish families with up to seven veterans, including several who had lost up to three sons in the war. Eckart lost the process and had to pay.

In March 1923, Eckart was to appear in court for slander against Reichspräsident Friedrich Ebert. He escaped by fleeing to the Obersalzberg. He received support from Christian Weber, who was a friend of Bruno Büchner, the landlord of Pension Moritz, and the SA leader Ernst Röhm, staff captain of the Bavarian army. Röhm finally organized Eckart's escape to Berchtesgaden. Eckart and Hitler frequented the Obersalzberg under code names (Dr. Hoffmann and Herr Wolf).

On 9 November 1923, Eckart was involved in the Munich Putsch; he was arrested and placed in Landsberg Prison along with Hitler and other party officials, but released shortly due to illness.

Eckart was the lyricist of the party anthem Deutschland erwache ("Germany Awake").

Eckart died in Berchtesgaden on 26 December 1923 of a heart attack. He was buried in Berchtesgaden's old cemetery, not far from the eventual graves of NSDAP official Hans-Heinrich Lammers and his wife and daughter. Hitler dedicated the second volume of Mein Kampf to him, writing that Eckart was

"one of the best, who devoted his life to the awakening of our people, in his writings and his thoughts and finally in his deeds."