From Metapedia
(Redirected from Jewish Bolshevism)
Jump to: navigation, search 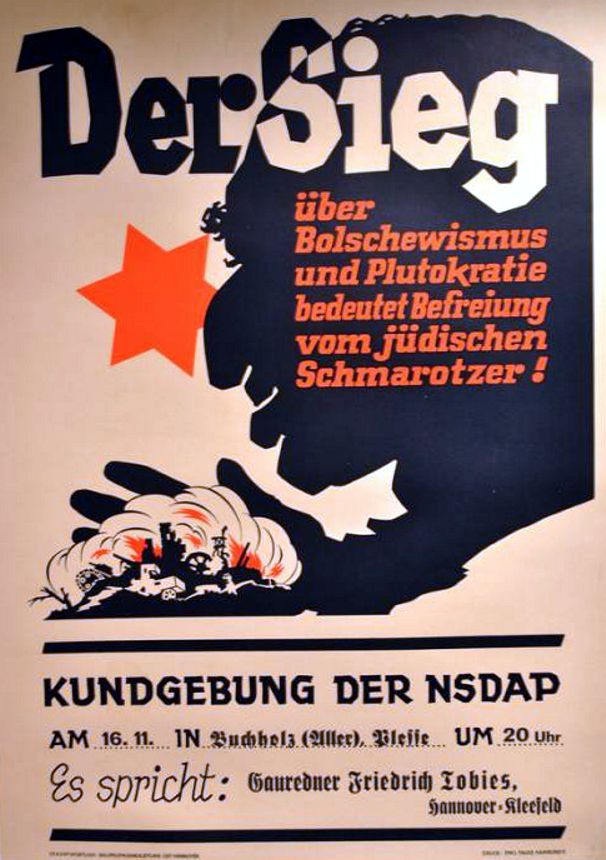 Poster for a meeting and speech about the Jewish Bolshevik threat against Germany sponsored by the local NSDAP of East Hannover, c. 1937 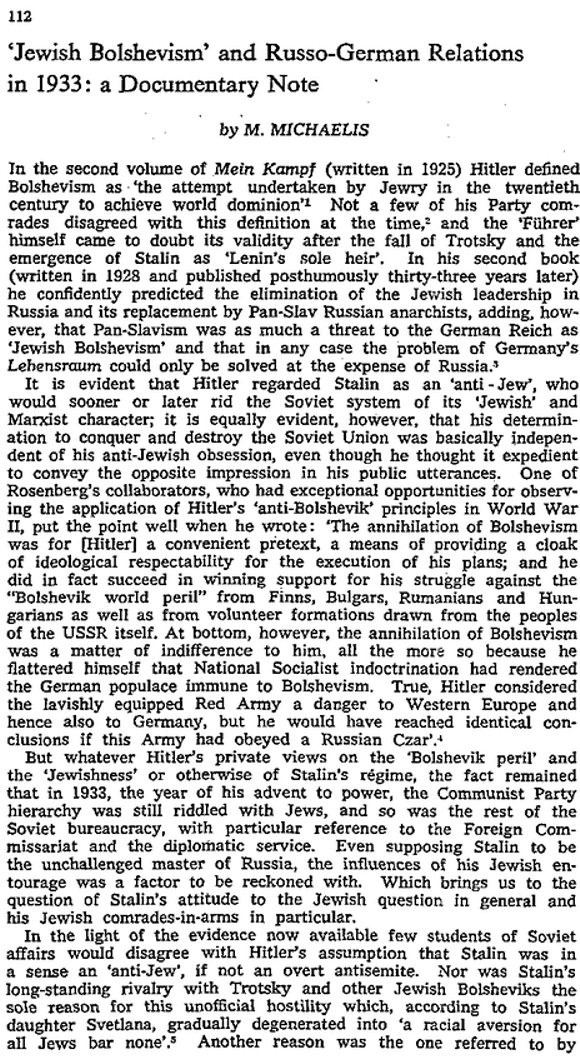 ‘Jewish Bolshevism’ and Russo‐German relations in 1933. Writing from the 1970s by Meir Michaelis (1905 - 2005) an Israeli historian (saying that the early government of the soviet union was mostly Jewish).

Jewish influence has been high in many Communist movements, organizations, and countries. This especially in relation to the Jewish share of the population. Many influential Communist ideologues and leaders (including Karl Marx) were Jewish.

The relationship was commented early on by outside observers. It (and the atrocities of Communism) became one of the reasons for hostility towards Jews, such as by National Socialism. However, this relationship is rarely mentioned in politically correct descriptions. This is also the case for Jewish influence more generally.

The perceived strong support for Communism and participation in some Communist atrocities also contributed to anti-Semitism in Eastern Europe and atrocities and pogroms against Jews, such as at Jedwabne.

For example Kevin MacDonald has argued that one explanation for the strong support by many Jews was that Communism was seen as beneficial for Jewish group interests, such as by Communist revolutions removing previous restrictions on Jewish influence. Some Communist atrocities have been seen as partially explained as some Jews when gaining power taking revenge on groups perceived as having persecuted Jews during the previous regime. See Jewish group evolutionary strategy.

However, regarding the mass killings under Communist regimes, the relationship is not simply Jews killing non-Jews. Jewish influence varied, several other groups were influential (including other minorities), Jews could also be among those persecuted and killed (although it has been argued often to a lesser extent than many other groups), and mass killings also occurred in Communist countries that did not have any significant Jewish presence.

There are many less politically correct descriptions of the relationship between Jews and Communism as well as discussions of possible causes and effects. One recent example is the book Two Hundred Years Together, which has also been commented on by many critics of Jewish influence. Another is Jews and Communism (copy of deleted Wikipedia article)‎. See also the "External links" section regarding examples.

Another aspect is Communist Jews sometimes working together with Communists from other minorities towards common interests (and sometimes against the interests of the majority).

Also non-Communist Jews may in some cases have indirectly helped Communism, such as by supporting overthrowing the Czarist regime and its restrictions on Jews, without necessarily intending that the Communists should ultimately gain power. They may also in some cases have directly supported various Communist regimes, since the various opposing anti-Communist forces were often also anti-Jewish and seen as worse alternatives. Various forms of support from Jews outside the Soviet Union have been argued to have been important or crucial for Soviet Communism on several occasions.

Jewish support for Communism gradually diminished in the post-WWII period as the Jewish influence was somewhat reduced in the Soviet Union (notably during the Great Purge), the threat from National Socialist Germany was eliminated, the Cold War started, and Israel was created (with Jews in some cases shifting from supporting Communism to supporting pro-Zionist Neoconservatism and/or Cultural Marxism).

The United States post-war "McCarthyism" has been argued to have caused Jewish organizations to actively try to reduce sympathy for Communism among Jews.[1]

During the final part of Stalin's regime, he became increasingly anti-Semitic and has even been argued to have planned a general purge and deportation of Soviet Jews. During the Cold War, the United States supported Israel, while the Soviet Union supported opponents of Israel and published anti-Zionist texts such as Judaism without embellishment. Neoconservatism was strongly anti-Soviet.