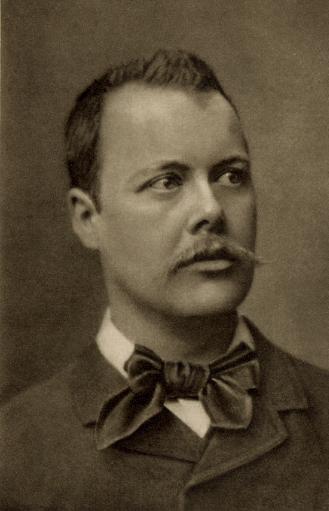 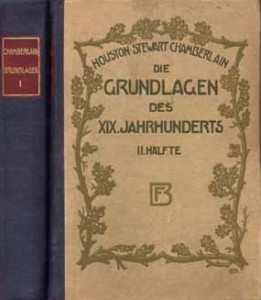 Houston Stewart Chamberlain (September 9, 1855 - January 9, 1927) was a British-born naturalized German natural scientist, and author of popular scientific and political philosophy books (includes those on Richard Wagner, Immanuel Kant and Johann Wolfgang Goethe) as well as proponent of nationalist and Pan-Germanic ideas. His book Die Grundlagen des neunzehnten Jahrhunderts (The Foundations of the Nineteenth Century) (1899) became one of the references on the Teutonic peoples and for the Pan-Germanic movement of the early 20th century, selling hundreds of thousands of copies in several languages.

Houston Stewart Chamberlain was born on September 9, 1855, in Southsea, England. His mother, Eliza Jane, a daughter of Captain Basil Hall, R.N., died before he was a year old, and he was raised by his grandmother in France.

Chamberlain's father, Rear-Admiral William Charles Chamberlain, had planned a military career for his son and at 11 he was sent to a public school for future army and navy officers. But the young Chamberlain was more interested in studying music, literature and astronomy, and the prospect of serving as an officer in India or elsewhere in the British Empire held no attraction for him. In addition he was a delicate child and early health concerns put an end to Chamberlain's military prospects.

At the age of 14 he began to suffer from seriously poor health, and travelled to various spas around Europe accompanied by a Prussian tutor who taught him German and interested him in German culture and history. He then moved to Germany, becoming an important member of the "Bayreuth Circle" of German nationalist intellectuals influenced by the ideas of Richard Wagner. His second wife was Eva Wagner, the daughter of the composer.

Foundations of the 19th Century

In 1899 he published what many consider his most important work (he always said his tour de force was his work on Kant), Die Grundlagen des neunzehnten Jahrhunderts (Foundations of the Nineteenth Century). The work focuses on the premise that Western European civilization is deeply and seriously marked by the influence of the Teutonic peoples. Chamberlain grouped all European peoples: Celts, Germans, Slavs, Greeks, and Latins—into the "Aryan race", a race built on ancient Proto-Indo-European culture. At the helm of the Aryan race were the Nordic or Teutonic peoples. Chamberlain's goal was to create a movement that would revive the recognition of a united Germanic people. To do this, he incorporated not just the German peoples but all tribes with northern origins into the Teutonic race.

Chamberlain's book focused on the claim that the Teutonic peoples were the heirs to the empires of Greece and Rome, something which Charlemagne and some of his successors also believed. He argued that when the Germanic tribes destroyed the Roman Empire, Jews and other non-Europeans had already begun to dominate it. The Germans, therefore, saved Western civilization from alien and Semitic domination. Chamberlain's thoughts were influenced by the writings of Nietzsche, and also Gobineau who had argued upon the superiority of the Aryan race, a term that was increasingly being used to describe white European/Caucasian peoples, excluding Jews (whose language implied origins other than the Proto-Indo-Europeans). For Chamberlain the concept of an Aryan race was not simply defined by ethno-linguistic origins. It was also an abstract ideal of a racial elite. The Aryan, or 'noble' race was always in the process of creation as superior peoples supplanted inferior ones in evolutionary struggles for survival. Chamberlain used an old biblical notion of the ethnic make-up of Galilee to argue that, while Jesus may have been Jewish by religion, he was not Jewish by race. Otherwise, he suggested, God must be a Jew.

In late 1904 he finished work on his book on Aryans. In his introduction he states: "Some studies I have been working on in earlier times have had a lasting influence on the direction of my thoughts. On the following pages I have tried to make my efforts fertile, in the hope to encourage others to take up similar studies and to give them some helpful advice along their journey. The layman is the expert of laymanism, as it were, and so he may succeed in ways that are unpermitted to the professional. As soon as the provisional stimulation and explanation has taken place, the neophyte has to entrust himself to the guidance of competent scholars. At the end of this book a short list of literature will provide the necessary grip for further studying. This title, Aryan World-view, isn't entirely free of objection. Indo-Aryan would have been more precise, or even ancient Aryan, if need be. But the writer fears to discourage just the reader he wishes to interest, by using a learned-sounding word. Let it be said right here that in this little book Aryan is not meant in the much debated and anyway difficult to limit sense of a problematic primeval race, but in the sensu proprio, meaning, to characterize the people that descended, several millennia ago, from the Central Asian plateau into the valleys of the Indus and the Ganges and who remained pure by obeying strict caste laws for a long period to keep themselves from mingling with strange races. These people called themselves the Aryans, that is to say the noblemen or the lords."

Chamberlain wrote several other works on Natural Science in several languages, and he was also an early supporter of Hans Hörbiger's Welteislehre, the fallacious theory that most bodies in our solar system are covered with ice. Chamberlain also rote extensively about Wagner, and edited some of his letters.

During his lifetime, Chamberlain's works became widely popular throughout Europe, and especially in Germany, where he was invited to stay at the court of Kaiser Wilhelm II. Chamberlain was at ease in the German language and wrote in it. Angered by Britain's declaration of war in 1914 against the Central Powers, which he saw as fratricidal murder, he published several propaganda texts against Britain and became a citizen of Germany in 1916.

During the inter-war period certain pro-National Socialist theologians also developed some of their racial theories along similar lines to Chamberlain's theories. It was said that his works would later have a marked effect upon German nationalist movements, such as National Socialism. Adolf Hitler was an avid student of his "Foundations", and praised him as "The Prophet of the Third Reich", although by the advent of the Nazis Chamberlain was long retired and had suffered a paralysing stroke prior to the end of The Great War.

Chamberlain, however, as an author and writer long pre-dates the Nazis.

In May 1926, Joseph Goebbels wrote in his diary after a visit to Chamberlain: "A painful scene; Chamberlain on a day-bed. Broken, mumbling, tears in his eyes. He holds on to my hand and won't let go. His big eyes glow like fire. Greetings, father of our spirit. Path-breaker, pioneer! I am moved to the depths of my soul." During the winter of 1926 the sick man's life flickered on in a semi-conscious and hopeless state, cared for by his wife, Eva, and Winifred Wagner. On January 9, 1927, Chamberlain died in Bayreuth, which flew flags of mourning as the hearse, drawn by horses draped in black, halted in front of the Chamberlain house. He was taken to Coburg for cremation.[1]