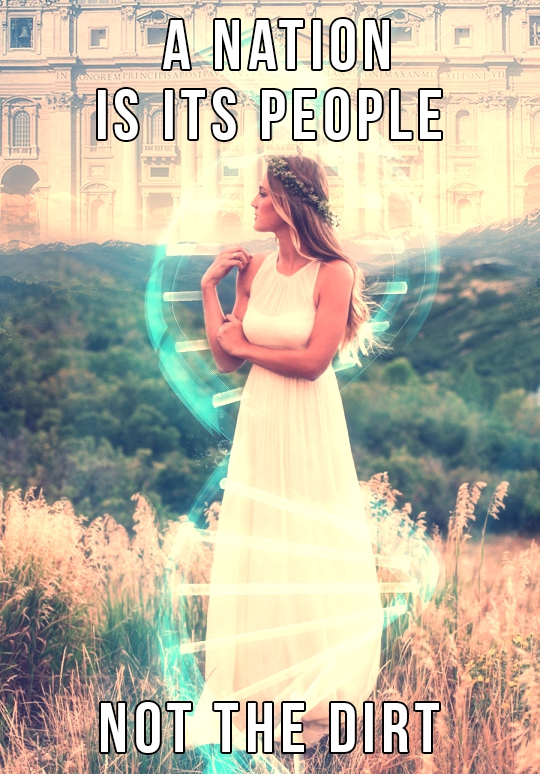 In 1939 the London-based Royal Institute for International Affairs defined the nation states: "The ideal nation is one which (a) possesses characteristics distinguishing it clearly from others; (b) is free from external control, and sufficiently strong to maintain that freedom. One of the chief objects for which this freedom is required is the unrestrained enjoyment of the characteristics mentioned in (a); (c) acts as a single entity possessing interests and pursuing policies designed to promote those interests.[1]

The word nation ultimately derives from the Proto-Indo-European root "gene" "to produce, give birth, beget," with derivatives referring to family and tribal groups.[2][3] Another derivative is the Latin word "gens" with similarities to nation and race. "In classical and Medieval literature, the major term in ethnographic descriptions was gens—a Latin word that is usually translated as “people” or “nation.” Significantly, gens connotes a common ancestry or stock (hence its etymological link with genero, to beget or produce), reflecting an ancient way of understanding a nation not as a social or political unit, but as a group of people linked by origin. Gens was therefore close in meaning to “race,” understood in the traditional sense of “lineage” or “extraction.”"[4]

Nationalism has been argued to have partially genetic causes. See the article on Racial genetic interests.

There are also partially non-genetic aspects of nationalism, such as preferences for different customs, languages, clothing, food, and so on. However, such different preferences may to some degree be influenced by genetic differences. Furthermore, increasing the differentiation of a group from other groups by cultural markers, even if these markers are to some degree arbitrary, may have served the genetic interest of the group, for reasons such as increasing group cohesion/cooperation and by making it easier to quickly spot non-group intruders.

Nationalism is often associated with a particular territory and support for greater autonomy/independence for this territory, if it is not already independent. Also this may have partially genetic causes. See Racial genetic interests: Ethnicity and territory.

A state is in one sense a political entity with a high degree of sovereignty over a particular territory. A state can be an independent country, but need not be, such as in a federation of states.

A "nation state" occurs when (almost) all members of a state are members of one nation. Nationalist movements typically support nation states for their nations and often preferably nation states that are independent countries. They may also argue more generally that all nations have the right to nation states.

The members of a particular nation may be divided among several nation states and/or not live in nation states. A nation state may or may not include all or parts of the traditionally ancestral territory of a nation.

The word "state" is sometimes used in a different sense, as a synonym for "government", but that is not the sense intended in nation state.

Critics of ethnic/racial nations and nationalism often claim that they are recent social construct, that were created and maintained in order to increase internal support among the population for a country and its regime. Nation states and nationalism are often seen as 19th-century European creations, associated with developments such as obligatory state-mandated education, mass literacy, and mass media, supposedly creating in the general population socially constructed senses of national identity and nationalism. This is associated with seeing races as recent social constructs and race denialism.

Such forms of argued nationalism can then include support for multiracial/multicultural countries, which consist of many different groups with few shared interests and identities, except possibly a superficial, artificially created civic "nationalist" identity. Civic nationalism can be described as soft globalism.

The distinction between "civic" and ethnic nationalism was invented by the Jewish theorist Hans Kohn in his 1944 book The Idea of Nationalism.

The word "nationalistic" is according to one dictionary "always used to indicate disapproval of someone's views."[5]