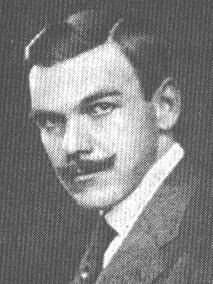 Theodore Lothrop Stoddard (29 June 1883–1 May 1950), was an American political theorist, historian, eugenicist, mass immigration critic, and an author who wrote a number of prominent books on topics related to race.

In 1923, an expose by Hearst's International revealed that Stoddard was a member of the Ku Klux Klan (KKK), and had been acting as a consultant to the organization. A letter from the KKK to members had praised The Rising Tide of Color. Stoddard privately dismissed the paper as a "radical-Jew outfit".

Between 1939 and 1940, Stoddard spent four months as a journalist for the North American Newspaper Alliance in National Socialist Germany.

Stoddard authored many books, most of them related to race and civilization. Many of his books and articles described what he saw as the peril of immigration.

The French Revolution in San Doming

The French Revolution in San Domingo (1914) was originally the author's doctoral thesis at Harvard University, becoming a very popular book in its day, described in more detail in the article on the book.

See also the article on Haiti.

The Rising Tide of Color Against White World Supremacy

His most known book was The Rising Tide of Color Against White World Supremacy (1920). In this book, he presented a view of the world situation pertaining to race, focusing concern on weakening of Whites caused by the First World War, possible collapse of colonialism, and the argued coming population explosion and possible mass migration by non-Whites.

In his book, Stoddard stated that the "yellow" race (East Asians) presented a dangerous threat to the White world, with the Chinese and Japanese being the only races not ruled by Whites at the time. He stated the then imperialist ambitions of Japan, the then rapid population growth of China, and stated that the Asians represented the only race who could challenge Whites in terms of technological advancement.

Stoddard also stated that Muslims might also be a threat, although he thought that the greatest risk would be if Blacks became Muslims.

Stoddard argued that race and heredity were the guiding factors of history and civilization, and that the elimination or absorption of the White race by the colored races would result in the destruction of Western civilization.

As is the case for Madison Grant, some of his critics incorrectly use the word "eugenics" as a synonym for views on immigration and race, causing confusing argumentation.

The Revolt Against Civilization: The Menace of the Under Man

In The Revolt Against Civilization: The Menace of the Under-Man (1922), he stated that civilization places a growing burden on individuals, leading to a growing underclass of individuals who cannot keep up, and a 'ground-swell of revolt'. Stoddard advocated immigration restriction and birth control legislation in order to reduce the numbers of the underclass, while promoting the growth of the middle and upper classes. He believed that social progress was impossible unless it was guided by a "neo-aristocracy" made up of the most capable individuals and reconciled with the findings of science, rather than based on abstract idealism and egalitarianism.

Regarding influence on the claimed National Socialist concept "subhuman", see the article Subhuman.

After the passing of the Immigration Act of 1924, which severely limited immigration from Southern and Eastern Europe, Stoddard urged for White unity and the assimilation of the immigrants in his book Reforging America. Unlike Madison Grant and others, who concerned themselves with keeping America racially "Nordic", Stoddard stated that the non-Nordic White peoples who were now in the country needed to be Americanized, and believed that the country could continue to function so long as it was mostly White and retained its Nordic, Anglo-Saxon core. Stoddard predicted a coming racial struggle between White civilization and the colored world, and believed that animosity between Whites had to be diminished, if the White race was to survive.

Into the Darkness: Nazi Germany Today

During World War II, he wrote Into the Darkness: Nazi Germany Today (1940), about the effect of the war and National Socialism on Germany, which he had visited. The title does not refer to plunging into barbarism, but to the rigorous blackout all Germans maintained against the possibility of night bombardment. Stoddard was relatively nonpartisan in his coverage of the new regime, but in The Rising Tide of Color Stoddard had criticized "Teutonic imperialists" for the outbreak of the First World War. He opposed what he saw as the disuniting of the White peoples through intense nationalism within Europe.

Nevertheless, after World War II, Stoddard's theories were judged as too closely aligned with those of in Germany and he suffered a large drop in popularity. His death in 1950 from cancer went almost entirely unreported, despite his previously broad readership and influence.

Part of this article consists of modified text from Wikipedia, and the article is therefore licensed under GFDL.
Retrieved from "http://en.metapedia.org/m/index.php?title=Lothrop_Stoddard&oldid=467672"
Categories: