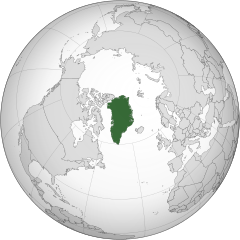 Greenland is the world's largest Island. Greenland remains a part of the Denmark, but the home-rule government is responsible for most domestic affairs. The inhabitants are primarily Inuit (Eskimo).

Vikings established settlements. But in the 14th century the settlements declined, perhaps as a result of a cooling in Greenland’s climate. In the 15th century they ceased to be inhabited. In 1721, the kingdom of Denmark-Norway, established new contacts.