Hans Michael Frank (b. 23 May 1900; d. 16 October 1946) was a German lawyer and an official in National Socialist Germany as their senior jurist. He was elected a deputy to the Reichstag in 1930. At the outbreak of World War II, Frank was appointed Governor-General of the General Government. After the war, he was a defendant at the Nuremberg Show Trials and was executed.[1] 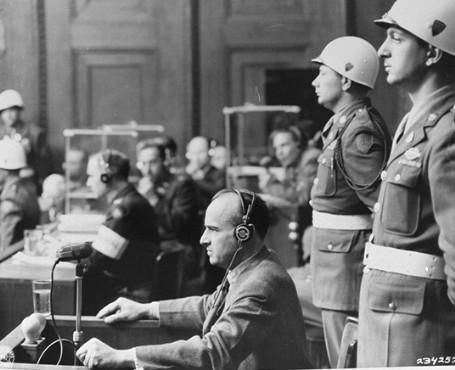 In late 1917, Frank joined the Imperial German Army and served shortly in World War I, but never at the front. In 1919 he joined the newly formed Freikorps under Franz Ritter von Epp and was apart of the group that crushed the German Revolution in Munich. During the early part of the 1920's Frank was studying law and in 1926 graduated Law School. With the rise of the NSDAP, Frank became the Party's and Adolf Hitler's legal advisor.

In 1933, Hitler become the Reichskanzler of Germany and Frank was appointed as the Minister of Justice in Bavaria. During the Night of the Long Knives, Frank raised objections to the execution of the accused without trial of 110 members of the Sturm Abteilung (SA). As as result of his intervention only 20 men were shot. After this Frank lost his influence in the NSDAP hierarchy.

After the conquest of Poland, Frank became Governor-General of the General Government, the remaining Polish territory not annexed by National Socialist Germany and the Soviet Union. Hans Frank was captured in May 1945 and was accused of Crimes Against Humanity, mainly involving the Holocaust.

"I myself have never installed an extermination camp for Jews, or promoted the existence of such camps; but if Adolf Hitler personally has laid that dreadful responsibility on his people, then it is mine too, for we have fought against Jewry for years; and we have indulged in the most horrible utterances.".

Hans Frank and the Holocaust

Statements made by Hans Frank during the war are sometimes cited as evidence for the politically correct Holocaust version, which have been criticized by Holocaust revisionists. One example is that "On October 7, 1940, Frank stated in a speech to a Nazi assembly:

“I could not eliminate [ausrotten] all lice and Jews in only one year. But in the course of time, and if you help me, this end will be attained (p. 186).” [...] Rahavam Zeevi, Israel’s minister of Tourism, was recently quoted as saying: “They [the Palestinians living illegally in Israel] arrived here and are trying to become citizens because they want social security and welfare payments…We should get rid of the ones who are not Israeli citizens the same way you get rid of lice. We have to stop this cancer from spreading within us.” [...] What the Zeevi quote shows is that one can refer to human beings as “lice” that “have to be eliminated” without literally meaning that said people are to be exterminated. In other words, Zeevi’s words cannot be interpreted in a literal manner; he didn’t mean the Israelis should physically exterminate the Palestinians. He simply meant he wants them deported. By the same token, Frank’s words cannot be understood in a literal manner. He simply meant that he wanted to deport the Jews in a brutal manner."[2]

See also Meanings and translations of German words and Holocaust revisionism‎ on "ausrotten" (a verb form of "Ausrottung"; literally "rooting out") not necessarily meaning "extermination". Furthermore, even politically correct history do not allege an extermination policy at this date.

Another example is that anti-revisionists frequently cite a speech made on 16 December 1941 (often misdated to 13 December 1941). In this speech, Frank used words that anti-revisionists argue mean "exterminate" and that revisionist argue refer to deportations (see Meanings and translations of German words and Holocaust revisionism‎). However, Frank also explicitly stated that "We cannot shoot 3.5 million Jews, we cannot poison them" and "I have initiated negotiations for the purpose of deporting them to the east."[3]

The revisionist Germar Rudolf has written that "Interestingly, his diaries encompassing 43 volumes, which are full of grandiloquent verbosity, contain no hint that he knew anything about extermination measures. Even from his interrogation during the IMT (Vol. 12, pp. 7-45) it can be concluded that the governor of Poland had either not been informed at all in this regard, or that such measures simply hadn’t existed. He even claimed to have conducted his own inquiries about the camps at Majdanek, Belzec and Auschwitz, because he had found out about rumors spread by enemy media. Yet his investigations did not confirm the rumors (ibid., pp. 17ff.)."[3]

Dr. Hans Frank, married father of five children, was convicted and sentenced to death, which was carried out on 16 October 1946.