From Metapedia
(Redirected from Majdanek)
Jump to: navigation, search

The Majdanek camp was according to the politically correct view on the Holocaust and the Holocaust camps an extermination camp, while Holocaust revisionists argue that it was a concentration/forced labor camp.[1]

The Majdanek camp is sometimes referred to as the Lublin camp, since it was located in the outskirts of the city of Lublin. The name Majdanek derives from the name of the city district.[2] 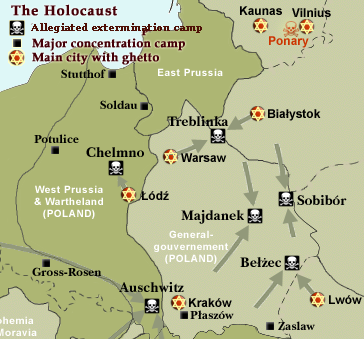 More detailed maps and air photos of Majdanek and revisionist arguments based on these can be found in Air Photo Evidence—World War Two Photos of Alleged Mass Murder Sites Analyzed (pdf version can be downloaded for free).

One example is that air photos are argued to show that from many houses in Lublin there were unobstructed views of everything occurring in the camp.

Majdanek, in the summer of 1944, was the first alleged extermination camp reached by the Soviets. In the camp, they found cremation furnaces, delousing chambers, and cans of Zyklon B. Revisionist argue that, although all these objects had life-saving functions, Soviet propaganda turned them into their opposite. These claims were extensively publicized also in other Allied countries.[1]

Another find was a huge pile of shoes, which has been revealed to originate from a place in the camp where old shoes were repaired. These shoes were also used for propaganda purposes.[1]

Revisionists argue that the alleged atrocities in Majdanek have been gradually reduced in size also by mainstream descriptions, as Auschwitz and the "Aktion Reinhard" camps have come to dominate the Holocaust narrative.[1]

Victim numbers claimed for Majdanek according to different sources:[1]

The 2010 revisionist book Lectures on the Holocaust stated that "The most interesting of them is probably the second from last, which was claimed by the head of the research department of the Majdanek Museum, Tomasz Kranz (cf. Graf 2008). It’s less than 5% of what a Polish court had claimed right after the war, and it comes pretty close to what revisionists claim." How many of these were Jews was unclear, but was argued to probably be more than half.[1]

The 2012 revisionist book Concentration camp Majdanek, A historical and technical study stated that "The people imprisoned there suffered under catastrophically unsanitary conditions, epidemics, at times completely insufficient rations, back-breaking heavy labor, harassment. More than 40,000 Majdanek inmates died, primarily from disease, debilitation and malnutrition; an unknown number was executed. The real victims of Majdanek deserve our respect, just as all victims of war and oppression deserve our respect, regardless what nation they belong to. But we are not doing the dead any service by inflating their number for political and propagandistic reasons and by making utterly unfounded claims about the way they died."[1]

According also to politically correct history, 20,000 prisoners were released from camp, which revisionists argue is difficult to reconcile with the Germans being extremely secretive regarding the alleged exterminations.[2]

Politically correct history alleges that on 4 November 1943, 17,000 Jewish armament workers were shot. Revisionists argue that this is absurd, considering that Germany was in desperate need for workers in the armament factories. A large number of arguments are argued to support that this claim is false propaganda.[1]

Majdanek was by the Communist Soviet Union and Poland alleged to have used Zyklon B and carbon monoxide for mass gassings. Revisionists have argued that the evidence for this was even poorer than for Auschwitz, based on alleged "code language", but with no witness testimonies that describe the claimed homicidal gassing procedure, all documents clearly referring only to delousing or disinfestation operations, and all the buildings being in essentially their original state and impossible to have been used as alleged.[1]