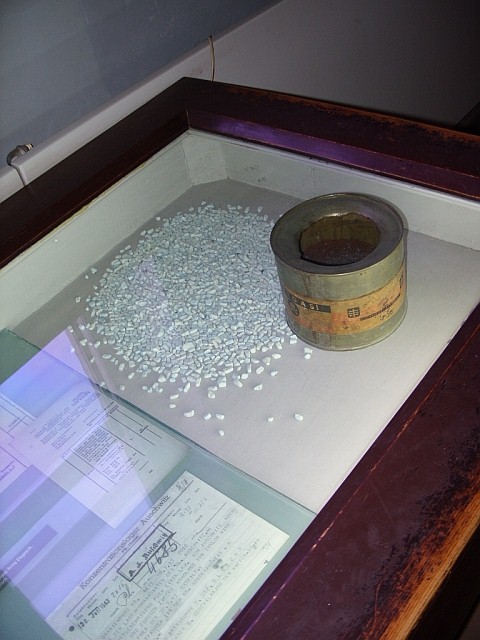 A can of Zyklon B with adsorbent granules displayed at the Auschwitz museum.

It was historically widely used in order to kill pests, such as lice in clothing and buildings. As lice may also spread diseases, such as typhus, especially when many people live closely together, such as in concentration camps, Zyklon B was an important agent against diseases. Today, hydrogen cyanide has in most cases been replaced by newer pesticides, but is still used, using other trade names.

Holocaust revisionists argue that various properties of Zyklon B are incompatible with the descriptions of how the alleged mass killings occurred, that the constructions of the alleged homicidal gas chambers are incompatible with mass killings using Zyklon B, and that examinations of Zyklon B derivatives in gas chambers walls demonstrate that no mass murders occurred.

Regarding more on this, see the Missing Zyklon B derivatives in claimed homicidal gas chamber walls argument and Holocaust material evidence articles as well as the "External links" and the "See also" section in this article.