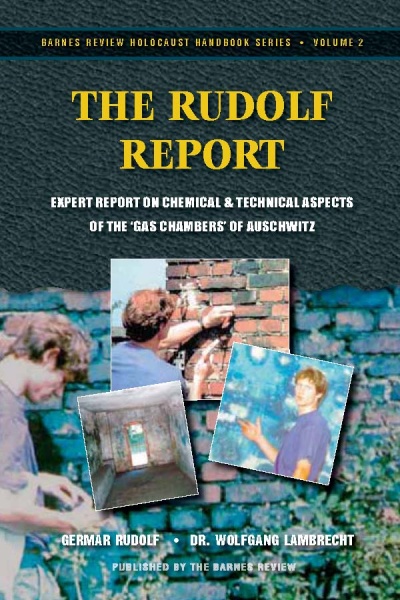 Book cover of The Rudolf Report showing visible Prussian blue discolorations on delousing chamber walls that are absent on the walls of the alleged homicidal gas chambers.

It was historically widely used in order to kill pests such as lice in clothing and buildings. As lice may also spread diseases such as typhus, especially when many people live closely together (such as in concentration camps), Zyklon B was an important agent against diseases. Today hydrogen cyanide has in most cases been replaced by newer pesticides, but is still used, using other trade names.

The first Leuchter report was produced under great time pressure in 1988, shortly before the second of Ernst Zündel's Holocaust trials, by Fred Leuchter, who had no in-depth knowledge of the historical issues at hand. It has often been criticized by anti-revisionists. Revisionists argue that the revisionist replies and later reports, such as the Rudolf report and the Lüftl report have often been ignored, which in effect means that the anti-revisionists attack straw men, but that is then presented as the revisionist position having been disproven.

One example is the Irving-Lipstadt trial in 2000, where the first Leuchter report was criticized in the judgment and later reports ignored.[2]

Regarding the Leuchter report, a common tactic is to simply dismiss it (and illogically all later reports by others authors) by making ad hominem attacks against Leuchter. This occurred even during the 1988 trial, in which the judge prohibited the defense from using or even mentioning to the jury the report and severely limited what Leuchter was allowed to state as a defense witness. This was motivated by claiming that Leuchter was an expert only on a very limited area.[3] See also Ernst Zündel's Holocaust trials: The judge at the 1988 trial.

Wall exposure to Zyklon B criticisms

Germar Rudolf, chemist and author of the Rudolf report and other works on Zyklon B and the Holocaust, has argued that revisionists have answered the various criticisms, such as regarding the different concentrations of poison gas (hydrogen cyanide) needed to kill lice (in the delousing chambers) and humans (in the alleged homicidal gas chambers). Revisionists have thus argued that:[1]

There is a difference between the hydrogen cyanide concentration that may kill a single human under ideal conditions and the much higher concentration needed to very quickly kill a large room full of people in a few minutes. Even the (at first) anti-revisionist Jean-Claude Pressac calculated that under such conditions the amount of cyanide gas that would have been used would have to be 40 times the theoretically lethal dose.[4]

Holocaust revisionists have also criticized claims such as only a low hydrogen cyanide concentration of "300 ppm" being required to kill humans. This claim is stated to actually be based on a very old experiment on rabbits, with the researcher explicitly stating that "I can make no quantitative statements about men."[5] Other research has shown that humans are less sensitive to hydrogen cyanide than small mammals.[6]

Another criticism is that sometimes very small trace amounts of Zyklon B derivatives appear to be found in the alleged gas chambers. Revisionists argue that such very small traces are found also in structures never argued to be exposed to Zyklon B, are not replicable, and even when found are impossibly small compared to the homicidal gas chamber allegations. Possible explanations for such traces include measurement errors, general camp delousing activities, and/or generally found traces of the very stable Prussian blue.[1][7][8]

1/10 of a human hair penetration and water hosing criticisms

Yet another criticism has been that cyanide/cyanide derivatives could only have penetrated the walls to a depth of one tenth of a human hair, which would cause problems such measurement errors. This was seen as an important argument in the judgment at the Irving-Lipstadt trial. Revisionists have argued that this is technically incorrect and that massive discolorations can be seen by the human eye even on the outside walls of delousing chambers, demonstrating penetration of the entire wall.[9][2][10]

A related argument is by claiming that the walls of the alleged homicidal gas chambers were hosed with water between gassings. Revisionist have stated that even decades of rain and other forms of weather exposure have not removed the discolorations seen on outside walls of delousing chambers. Furthermore, as stated earlier, higher wall dampness is a factor increasing the formation of discolorations.[11]

Still another example of a criticism is an often cited Polish investigation headed by Jan Markiewicz, which revisionists argue was openly politically biased and used a flawed technical procedure. Revisionists have further argued the same group had earlier instead found results supporting the revisionists, did not publish these results, but that they were released to the public through an indiscretion.[1][12] See the article on Jan Markiewicz and the external links there on this discussion.

Many of the more recent technical experts stating support for Holocaust revisionism have been subjected to extensive judicial and extra-judicial punishments for this. This applies to both Leuchter and Rudolf. Another example is the engineer Walter Lüftl, author of the Lüftl Report. Yet another example is Wolfgang Fröhlich, an engineer and a specialist in constructing gas chambers for purposes such as pest control. He has been convicted many times for "Holocaust denial" and sentenced to 14 years in prison.

The Chemistry of Auschwitz—Buna Rubber, Zyklon B, Prussian Blue and the Gas Chambers

The Chemistry of Auschwitz—Buna Rubber, Zyklon B, Prussian Blue and the Gas Chambers is a 2017 revisionist video documentary on the issue.

Other Zyklon B, gas chamber, and material remains arguments

Revisionists have made many other arguments related to Zyklon B and the alleged homicidal gas chamber. For example, already before the publication of the Leuchter report in 1988, "Dr. William B. Lindsey, a research chemist employed for 33 years by the Dupont Corporation, likewise testified in a 1985 court case that the Auschwitz gassing story is technically impossible. Based on a careful on-site examination of the "gas chambers" at Auschwitz, Birkenau and Majdanek, and on his years of experience, he declared: "I have come to the conclusion that no one was willfully or purposefully killed with Zyklon B [hydrocyanic acid gas] in this manner. I consider it absolutely impossible."[13]