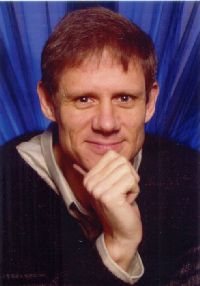 He studied chemistry at Bonn University, where he graduated in 1989 as a Diplom-Chemist, which is comparable to a U.S. PhD degree. From 1990-1993 he prepared a German PhD thesis at the Max Planck Institute for Solid State Research in conjunction with the University of Stuttgart, Germany.[1]

Parallel to this and in his spare time, Rudolf prepared an expert report on chemical and technical questions of the alleged gas chambers of Auschwitz, The Rudolf Report. He conclude in it that "the alleged facilities for mass extermination at Auschwitz and Birkenau were not suited for the purpose as claimed."[1]

As a result he had to endure severe measures of persecution in subsequent years. Hence he went into British exile. When Germany asked Britain to extradite Rudolf in 1999, he fled to the U.S. There he applied for political asylum and in 2004 married a U.S. citizen. In 2005, the U.S. recognized Rudolf's marriage as valid and seconds later arrested and subsequently deported him back to Germany, where he was put in prison for 44 months for his scholarly writings. Some of the writings he was punished for had been published while Rudolf resided in the U.S., where his activities were and are perfectly legal. Since not a criminal under U.S. law, he managed to immigrate permanently to the U.S. in 2011.[1]

Rudolf while in Britain started a small revisionist outlet for German language material, Castle Hill Publishers, and the multilingual website www.vho.org (see Vrij Historisch Onderzoek), which within a few years outgrew other revisionist websites by size and traffic. While his case wound its way through the U.S. legal system, Rudolf expanded his publishing activities into English language material, for instance by launching the Holocaust Handbooks series.[2]