From Metapedia
(Redirected from Düsseldorf)
Jump to: navigation, search

Düsseldorf is the capital city of the German state of North Rhine-Westphalia and centre of the Rhine-Ruhr metropolitan region.

Düsseldorf is an important international business and financial centre and renowned for its fashion and trade fairs.[2][3] Culturally, Düsseldorf is known for its academy of fine arts (Kunstakademie Düsseldorf, e.g. Joseph Beuys, August Macke, Paul Klee, Gerhard Richter, Sigmar Polke and Andreas Gursky), its influence on early electronic music (Kraftwerk) and its large Japanese community. As a city by the river Rhine, Düsseldorf is a stronghold for Rhenish carnival celebrations. Every year in July more than 4.5 million people visit the city's Largest Fair on the Rhine funfair.

The seventh most populous city in Germany by population within city limits, Düsseldorf is one of the country's five global cities. The Mercer's 2009 Quality of Living survey of cities with the highest quality of life ranked Düsseldorf sixth worldwide and first in Germany.[4][5]

When the Roman Empire was strengthening its position throughout Europe, a few Germanic tribes clung in marshy territory off the eastern banks of the Rhine River.[6]

In the 7th and 8th centuries, the odd farming or fishing settlement could be found at the point where the small river Düssel flows into the Rhine. It was from such settlements that the city of Düsseldorf grew. 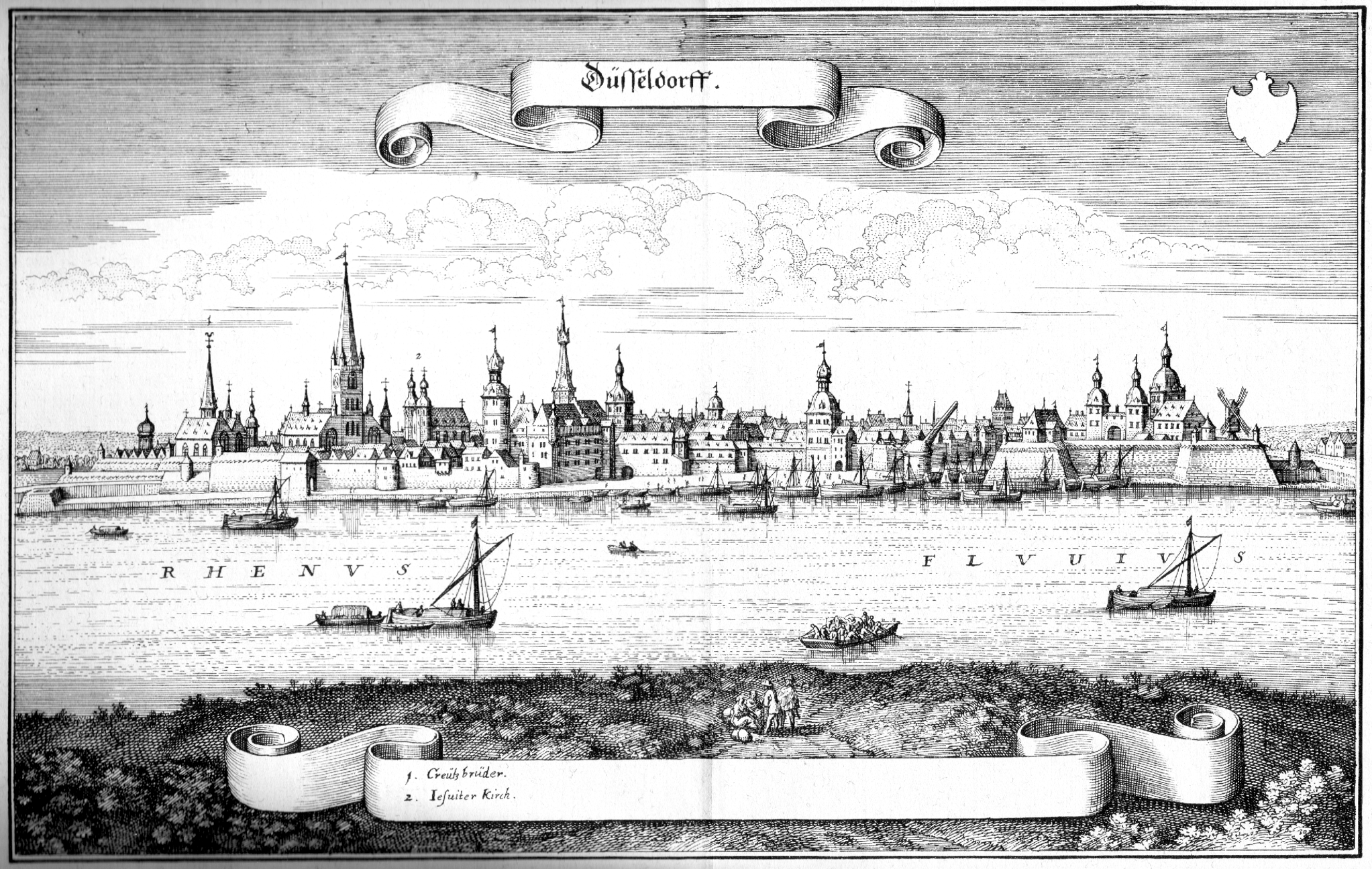 The first written mention of the town of Düsseldorf dates back to 1135 (then called Dusseldorp in the local Low Rhenish dialect). It was told that under Emperor Friedrich Barbarossa the small town of Kaiserswerth, lying to the North of Düsseldorf, became a well fortified outpost, where soldiers kept a watchful eye on every movement on the Rhine. Kaiserswerth eventually became a suburb of Düsseldorf in 1929.

In 1186 Düsseldorf came under the rule of Berg. The dukes of Berg moved their seat to the town in 1386. 14 August 1288 is one of the most important dates in the history of Düsseldorf as it was on this day that the sovereign Count Adolf V of Berg granted the village on the banks of the Düssel the Town privileges.

Prior to that announcement, a bloody struggle for power had taken place between the Archbishop of Cologne and the count of Berg, culminating in the Battle of Worringen. The Archbishop of Cologne's forces were wiped out by the forces of the count of Berg who were supported by citizens and farmers of Cologne and Düsseldorf, paving the way for Düsseldorf's elevation to city status, which is commemorated today by a monument on the Burgplatz. In fact, the custom of turning cartwheels is credited to the children of Düsseldorf. There are variations of the origin[7] of the cartwheeling children, but the most famous is the story. Today the symbol (Der Radschläger[7]) represents the story and every year the Düsseldorfers celebrate by having a cartwheeling contest. 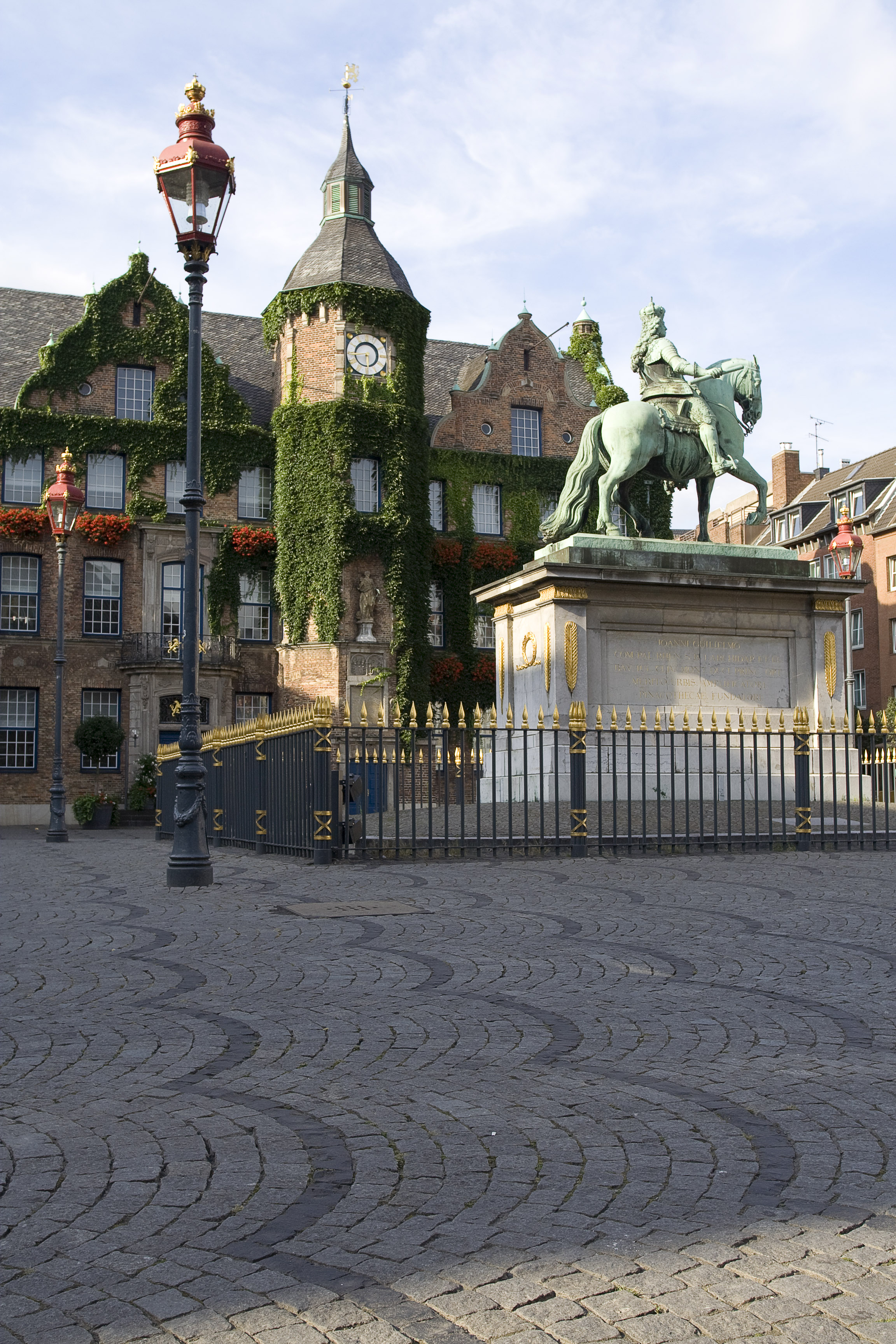 The historic townhall of Düsseldorf in the Altstadt. 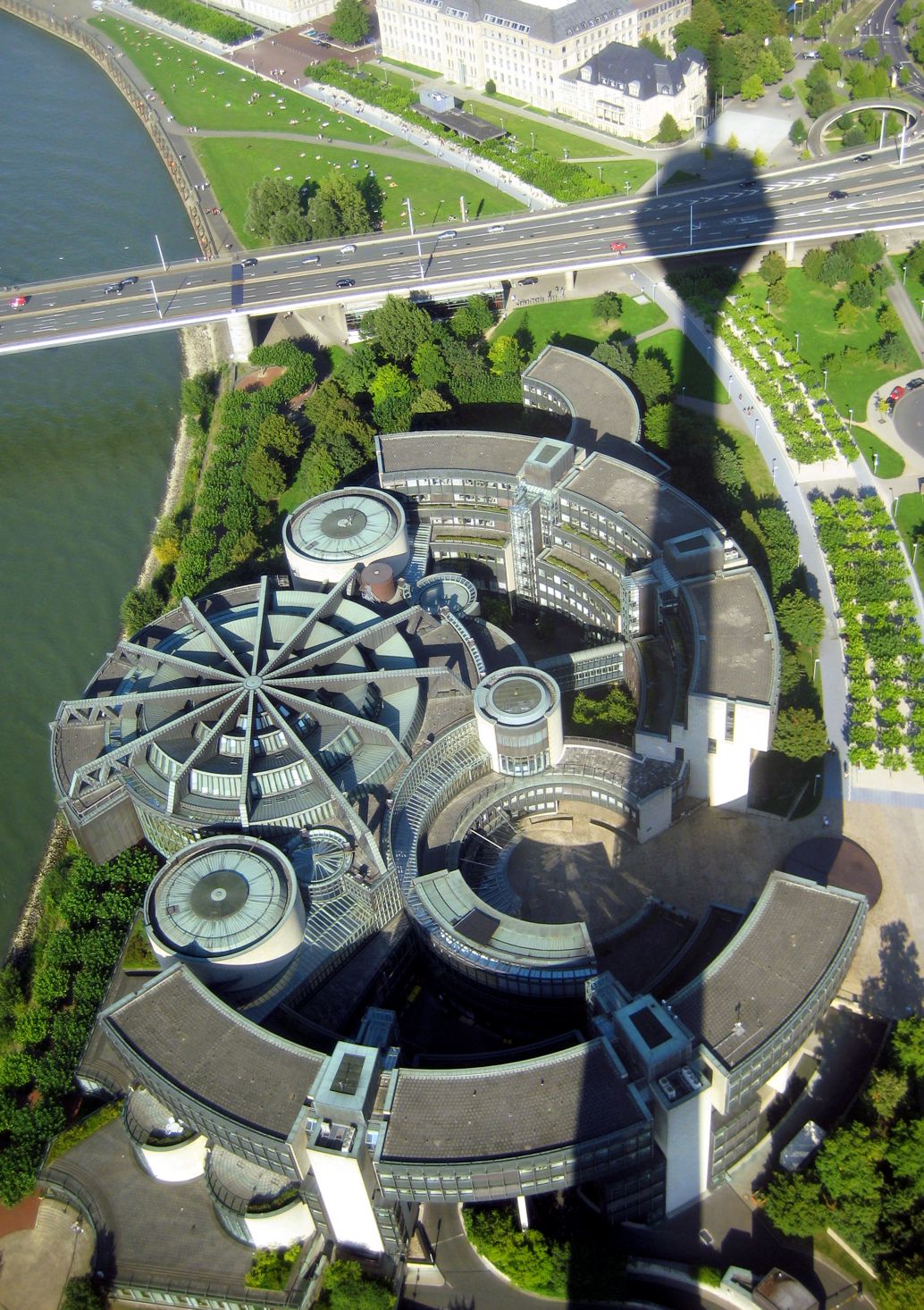 The state parliament, seen from the top of the Rheinturm.

After this battle the relationship between the two cities deteriorated, because they were commercial rivals. It is often said that there is a kind of hostility between the citizens of Cologne and Düsseldorf. Today, it finds its expression mainly in a humorous form (especially during the Rhineland Karneval) and in sports.

A market square sprang up on the banks of the Rhine and the square was protected by city walls on all four sides. In 1380, Düsseldorf was made regional capital of the Duchy of Berg. During the following centuries several famous landmarks were built, including the Collegiate Church of St. Lambertus. In 1609, the ducal line of the United Duchies of Jülich-Cleves-Berg died out, and after a virulent struggle over succession, Jülich and Berg fell to the Wittelsbach Counts of Palatinate-Neuburg, who made Düsseldorf their main domicile, even after they inherited the Electoral Palatinate, in 1685, becoming now Prince-electors as Electors Palatine.

Düsseldorf's growth was even more impressive under the leadership of Johann Wilhelm II (r. 1690-1716) in the 18th century, also known to his people as Jan Wellem. Greatly influenced by his wife Anna Maria Luisa de' Medici, the art lover designed a vast art gallery with a huge selection of paintings and sculptures that were housed in the Stadtschloss (city castle).

After the death of childless Jan Wellem, the flourishing royal capital fell on hard times again, especially after Elector Charles Theodore inherited Bavaria and moved the electoral court to Munich. With him he took the art collection, which became part of what is now the Alte Pinakothek in Munich. Destruction and poverty struck Düsseldorf after the Napoleonic Wars. Napoleon made Berg a Grand Duchy and Düsseldorf its capital. J. C. C. Devaranne, a leader of Solingen's resistance to Napoleon's conscription decrees, was executed here in 1813. After the defeat of Napoleon, the whole Rhineland including Berg was given to the Kingdom of Prussia in 1815. The parliament of the Rhine Province was established in Düsseldorf later.

By the mid-19th century, Düsseldorf enjoyed a revival thanks to the Industrial Revolution as the city boasted 100,000 inhabitants by 1882; the figure doubled in 1892.

In 1920, Düsseldorf became the centre for the General Strike. On 15 April 1920 45 delegates of the German Miners Union were murdered by the Freikorps.[8]

It was a target of terror bombing during World War II, particularly during the RAF bombing campaign against the Ruhr industry in 1943 when over 700 bombers were used in a single night. Raids continued late into the war. As part of the campaign against German oil facilities, the RAF raid of February 20/21 1945 on the Rhenania Ossag refinery in the Reisholz district of Düsseldorf halted oil production there.

In 1946 Düsseldorf was made capital of the new federal state of North Rhine-Westphalia. The city's reconstruction proceeded at a frantic pace and the economic transformation saw Düsseldorf growing into the wealthy city of trade, administration and service industries that it is known today.

Part of this article consists of modified text from Wikipedia, and the article is therefore licensed under GFDL.
Retrieved from "http://en.metapedia.org/m/index.php?title=Dusseldorf&oldid=129087"
Categories: