Otto Ernst Fritz Adolf Remer (b. 18 August 1912 in Neubrandenburg, Mecklenburg-Strelitz, German Empire; d. 4 October 1997 near Marbella, Spain) was a German officer of the Reichswehr and the Wehrmacht, at last Generalmajor and Recipient of the Knight's Cross of the Iron Cross with Oak Leaves in WWII. He played a crucial role in protecting Berlin during the 20 July plot to assassinate Hitler. After the war he became politically active and founded the Socialist Reich Party of Germany. He was married twice and had two sons and a daughter with his first wife. 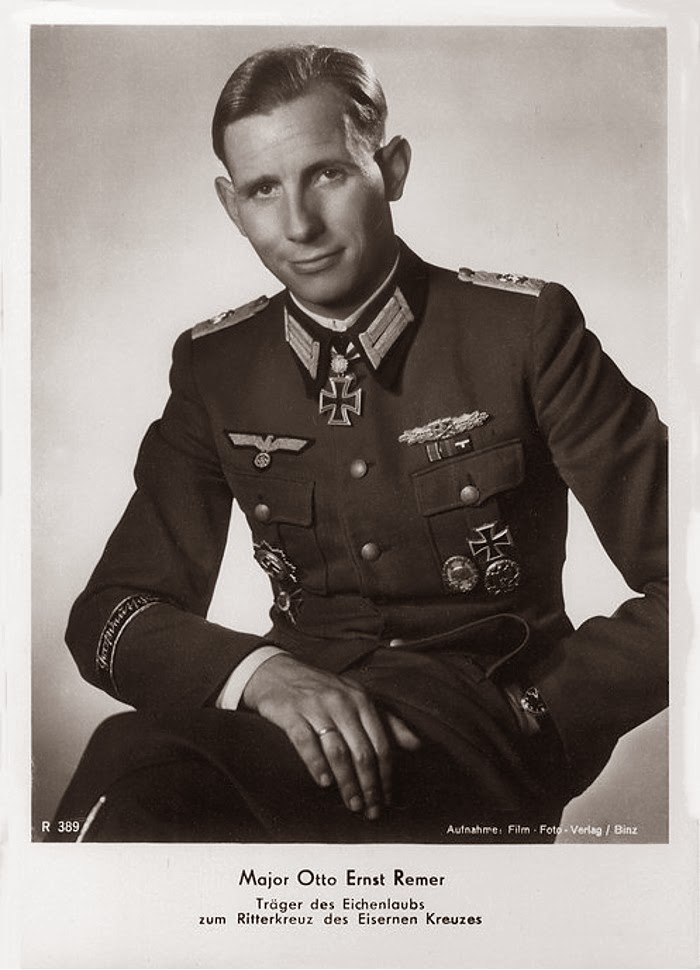 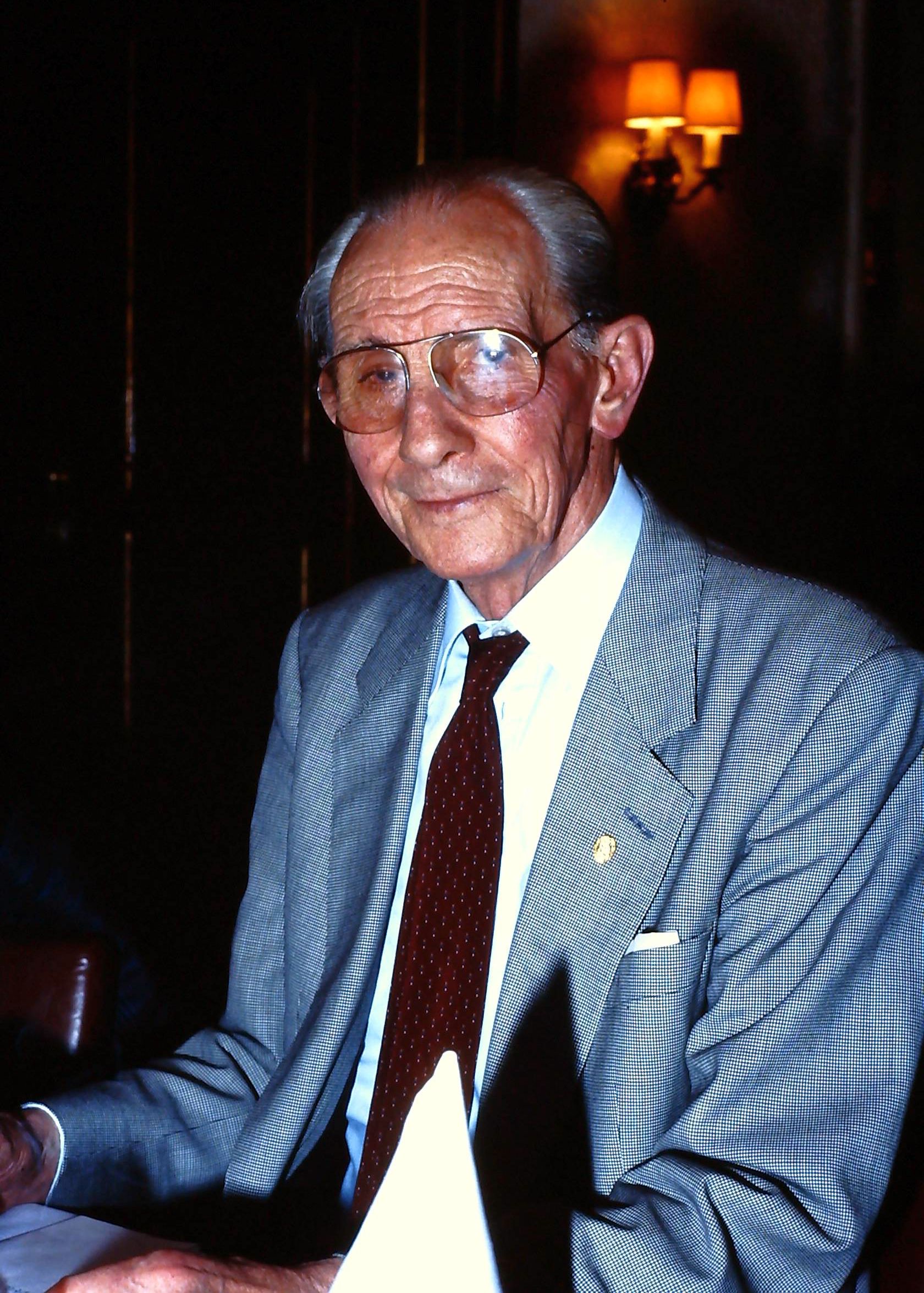 Remer volunteered for military service in 1932 at the age of 20.

By the time of the Poland Campaign, in September 1939, he was an Oberleutnant in a motorized infantry company, and went on to serve in the Balkans campaign, as well as in Operation Barbarossa, the invasion of the Soviet Union. By April 1942, he was a battalion commander, and he joined the Infantry Regiment Großdeutschland, in order to lead the special-weapons 4th (Heavy) Battalion, which supported the three rifle battalions of the elite regiment.

By February 1943, he commanded the 1st (armoured) battalion of Großdeutschland Division, after the original Infantry Regiment GD expanded to become a full division. His troops, mounted in halftracks, covered the withdrawal of an entire Waffen SS tank corps during the fighting at Kharkov. He was awarded the Knight's Cross for his service as battalion commander, and in November 1943, he was awarded the Oak leaves to the Knight's Cross for leadership at Krivoi Rog, which was presented by Adolf Hitler personally.[1]

In March 1944, after being wounded, Remer - now a major - was chosen to command the Infantry Regiment Großdeutschland, a unit that performed public and security duties in Berlin. During this time, Remer and his men successfully stopped the 20 July plot to seize control of the German government, following the assassination attempt on Hitler.

Major Otto Ernst Remer was the commanding officer of the Wachbattalion Großdeutschland. These forces were the only excisting Battalion of the Wehrmacht in Berlin of July 20th, 1944 which was not involved by order in the comanding structure of the group of conspiracy officer - led by von Stauffenberg.

Upon being ordered by General Paul von Hase (de) to arrest Minister of Propaganda Joseph Goebbels, Remer went to Goebbels office to do so, pistol in hand. Goebbels, however, used his oratory skills to dissuade Remer from arresting him, insisting instead that Hitler was still alive. When Remer asked for proof, Goebbels picked up the phone and asked to be put through to Hitler. Within the minute, Hitler was on the phone, and Goebbels handed the receiver to Remer.

He was the first and only neutral officer to hear the Fuehrer's voice live, during a phone "Blitzgespräch" call to the Wolfsschanze HQ in East Prussia. In that phone call he identified Hitler's voice as real and realized that The Fuehrer was alive.

Hitler asked Remer whether he recognized his voice, then gave Remer orders to crush the plot with his troops, which he did. That same night Remer was promoted two ranks to oberst (colonel). An Order by Hitler was given to surround the Berlin Governement area of "Bendlerblock". Remer gave order immediately to "Großdeutschland Guard Soldier" to rush to that area.

Remer discussed this incident in the Great Britain TV documentary series The World At War, produced in the early 1970s. He appeared to have no regrets about his role in crushing the plot, nor the war in general.[2] The same was true of his appearance as himself (coaching a young actor who was to portray him) in the German-language documentary drama about the 20 July assassination attempt, filmed by the German historian Joachim Fest.

Remer went on to command an expanded Führer-Begleit-Brigade (FBB), a field unit formed from a Großdeutschland cadre, in East Prussia with little success. His men, mostly young and inexperienced, suffered high casualties. The brigade was then transferred to the west for the Ardennes Offensive, in December 1944, and again suffered high casualties for little gain.

In 1945, when the FBB was expanded to divisional status, he was promoted to General (brigadier general) and appointed to command it. He was eventually captured by American troops, and remained a prisoner of war until 1947.

After the war, he was for two years an American prisoner of war, being released in 1947. He co-founded the Socialist Reich Party in West Germany in the 1950. It was banned in 1952, but not before it had gathered 360,000 supporters in Lower Saxony and Schleswig-Holstein, and won 16 seats in the state parliament. Among other views, it supported Holocaust revisionism. While the party was banned, its popularity may have contributed to the Allies and the West German government stopping some of the unpopular "denazification" policies in 1951. Remer faced criminal charges from the West German Government for his role in party, as allegedly being engaged in attempting to re-establish a National Socialism. He moved to Egypt and possibly other Arab states, serving as a (military) advisor. He returned to West Germany in the 1980s, once more involving himself in politics with the setting up of an organization entitled Die Deutsche Freiheitsbewegung ("German Freedom Movement"), which advocated the reunification of East and West Germany, and the removal of NATO military forces from Germany. He also published a newsletter, Der Bismarck-Deutsche.[3] From 1991 to 1994, Remer published a political newsletter entitled the Remer-Depesche, containing his political philosophy. Its content led to a court case where he was sentenced to 22 months imprisonment in October 1992, for allegd incitement of racial hatred by writing and publishing a series of articles stating that the Holocaust was a myth. In 1994, he moved to Spain to avoid the imprisonment sentence. There he also supported Holocaust revisionism. The High Court of Spain ruled against requests made by the German Government for his extradition back to Germany for imprisonment, stating that he had not committed any crimes under the Spanish law. Remer, at least in the early postwar period, has been stated to have considered the Soviet Union to be a lesser evil than the argued Jew-dominated United States, stating that it was “synonymous with the destruction of European culture”, but he welcomed the fall of the Berlin Wall and the reunification of Germany.[4]

Remer's Socialist Reich Party, which he had co-founded in 1949, was banned in 1952, after it had gathered about 360,000 supporters in Lower Saxony, and won 16 seats in the state parliament. The Socialist Reich Party also won eight seats in the Bremen state parliament. In the 1980s General Remer headed Die Deutsche Freiheitsbewegung (German Freedom Movement) and published a newsletter, Der Bismarck-Deutsche.[5]

From 1991 to 1994, Remer put out his own publication, the Remer-Depesche. Remer was sentenced to 22 months of imprisonment in October 1992, for writing and publishing a number of articles that were said to incite "racial hatred", through their questioning of the Holocaust. The political impact of this case upon the government is discussed in Searle's Wehrmacht Generals. His complaint over alleged violations of fairness of trial and freedom of speech was unanimously rejected by the European Commission on Human Rights.[6] He filed numerous appeals, and eventually fled to Spain, prior to his actually being incarcerated.[7]

In February 1994, Remer went into exile in Spain, in a successful effort to avoid imprisonment for his controversial public statements about the Holocaust. Remer was an avid supporter of studies by key individuals in Holocaust research, such as Fred Leuchter and Germar Rudolf. The high court of Spain ruled against appeals made by the German government to extradite Remer, claiming that he had not committed any crime under Spanish law. Later living in Egypt and Syria, Remer returned to Spain, and remained a wanted man in Germany until his 1997 death in Marbella at 85.

A fellow veteran of the Grossdeutschland Division had the following to say about his former commanding officer:

We, his former comrades, have deeply regretted that destiny confronted this young officer in July 1944 with a situation with consequences the bearing of which I should assume are beyond the powers of any human being. No judgment will be made here as to whether his decision on 20 July was right or wrong. But the consequences of his decision were so terrible, and have cost so much of the best German blood, that we old soldiers had expected that a man to whom destiny gave such a burden to carry until the end of his life would recognize this, and would thereafter live quietly and in seclusion. We, his former comrades, lack any sympathy for the fact that Herr Remer fails to summon up this attitude of self-effacement.[8]