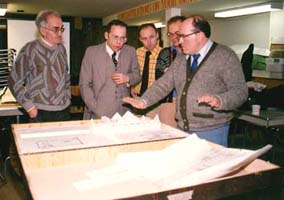 Ernst Zündel (right) accompanied by Fred A. Leuchter (center), Robert Faurisson (left) and Ditlieb Felderer (back); preparing the defense for his 1988 trial in Canada.

The Ernst Zündel's Holocaust trials were a series of trials and persecutions of Holocaust revisionist Ernst Zündel in Canada and Germany.

"In the early 1980s, Samisdat Publishers Ltd., under the signature of its president, Ernst Zündel, published a 32-page booklet entitled Did Six Million Really Die?. The booklet was published under a license from Historical Review Press in England which prohibited Samisdat from making any changes whatsoever to the publication. Samisdat sent the booklet to hundreds of teachers, ministers, politicians and media personalities across Canada in the hope that interest could be aroused in discussing the subject explored in the booklet: did six million Jews really die pursuant to a systematic policy of extermination by Nazi Germany during World War II?

Samisdat received no complaints regarding the booklet's factual accuracy. Nevertheless, in 1983, Samisdat's president, Ernst Zündel, was charged under a private information laid by Sabina Citron, a founder of the Canadian Holocaust Remembrance Association, with the criminal offence of "spreading false news" likely to cause racial and social intolerance. The charge was later assumed by the Crown and led to two lengthy jury trials in 1985 and 1988, both of which ended in convictions."[1]

Revisionists have argued that the booklet did contain some errors and unsupported statements, but these were not intentional and did not affect the overall argumentation of the booklet. See the article Did Six Million Really Die? for more details.

The first trial lasted 7 weeks. The defendant was found guilty and sentenced to 15 months in prison for distributing the Richard Harwood's book Did Six Million Really Die?.[2] However the verdict was set aside by the provincial appeals court. It ruled that the judge in that trial had, among other things, given improper instructions to the jury, and had improperly excluded defence evidence.[3]

Revisionists argue that the only two "witnesses" to the alleged homicidal gas chambers who have ever been cross-examined in a court had to admit in this trial that their accounts were based on hearsay. One of them, Rudolf Vrba, also admitted that he had used "poetic license". Vrba is one of the most famous Auschwitz witnesses, who together with Alfréd Wetzler wrote a very influential report on Auschwitz in 1944 that was the first to be officially sanctioned by the U.S. government., the Vrba-Wetzler report. Arnold Friedman was the other cross-examined "witness".[4]

In May 1988, at the conclusion of the second Zündel trial, the jury declared him guilty. A few days later, he was sentenced to 9 months imprisonment.[3]

"Two juries convicted Zündel notwithstanding devastating cross-examination of Holocaust "survivors" and Holocaust historians by defence attorney Douglas H. Christie and notwithstanding expert evidence which crushed the basis of the Holocaust story, namely, the allegation that millions of Jews were done to death with industrial efficiency in gigantic gas chambers and disposed of in crematories and burning pits. It did not matter to the jury in the second Zündel trial in 1988 that the warden of a United States penitentiary, Bill M. Armontrout, testified to the enormous difficulties of gassing even one person today in gas chambers. It did not matter to the jury that a forensic investigation of Auschwitz, Birkenau and Majdanek by the only expert in gas chamber technology in the United States, Fred A. Leuchter, Jr., resulted in Leuchter's opinion that no gassings could have taken place in the alleged Nazi gas chambers. It mattered not that the Canadian crematory expert, Ivan Lagacé, testified that the thousands of persons alleged by Holocaust historians to have been cremated in Birkenau and Auschwitz daily were "ludicrous" and "beyond the realm of reality." It did not matter to the jury that the internationally-known British historian David Irving testified that he no longer believed in the "Holocaust" as it had been defined by its historians. It did not matter that Holocaust historian Raul Hilberg refused to return to testify in 1988 after testifying in 1985 for fear of cross-examination. It did not matter that the Crown could not produce one expert witness in gas chambers or crematories to refute the defence expert evidence."[1]

The judge Ron Thomas even before the trial stated that "it is my view that the Holocaust is capable of immediate accurate demonstration by resort to readily accessible sources of indisputable accuracy. But I emphasize the ground upon which I hold that the court should take judicial notice of the Holocaust is that it is so notorious as to be not the subject of dispute among reasonable persons [...] The Holocaust is the mass murder and extermination of Jews by the Nazi regime during the Second World War, and the jury will be told to take judicial notice of that." As a result, the jury in the Zündel trial was directed that it was required to accept as a fact that the "Holocaust", as defined by Thomas, actually occurred.[5]

During the trial, the judge took actions such as prohibiting the defense from using or even mentioning to the jury the Leuchter report and severely limited what Leuchter was allowed to state as a defense witness. This was motivated by claiming that Leuchter was an expert only on a very limited area.[6]

In his sentencing the judge stated that he had told the jury that it was in the "public interest" that Ernst Zündel should be found guilty for reasons such as "maintenance of racial and religious harmony", "said false statement could have promoted intolerance of or hatred against the Jewish people", and "If one segment is not protected from criminal defamation and libel, that is, accusations of monstrous criminal wrong-doing, a gigantic criminal fraud, the whole community is vulnerable because the next segment is fair game and then the next segment is fair game until you have the prospect of the destruction of the entire community."[7]

See The Holocaust: Holocaust revisionism and "hate speech" on criticisms of such views.

On appeal, Canada's Supreme Court threw out the conviction, declaring on 27 August 1992 that the archaic "false news" law under which he had been convicted was a violation of the country's Charter of Rights.[3]

This was not only a personal vindication by Canada's highest court; Ernst Zündel secured an important victory for the rights of all Canadians.

A warrant for his arrest for alleged Volksverhetzung (incitement of the masses) was issued in Germany in 2003. After a series of events, he was deported to Germany in 2005. He was alleged to be a threat to Canada's national security due to alleged links to “neo-Nazi” groups. He was denied political refugee status. The events also included being deported from the United States for allegedly violating immigration rules, specifically visa waiver overstay, which Zündel argued was a trumped up charge.

Zündel’s defense team initially included Horst Mahler and Sylvia Stolz, but they were removed and even imprisoned after having expressed less politically correct views. Another lawyer, Jürgen Rieger, was a leading member of Germany's NPD.

In 2007, Zündel was sentenced to five years in prison, the maximum sentence possible for violating the Volksverhetzung law in the German penal code, which bans incitement of hatred against a minority of the population and which was how his Holocaust revisionism was interpreted by the German court. His time in pre-trial confinement in Canada was not taken into account on his sentence, but only the two years he was confined in Germany since 2005. He was released in 2010.

The 1988 trial was followed by the publication of the influential Leuchter Report based on evidence gathered for the 1988 trial. In response, a series of criticisms and counter-criticisms (such as the Rudolf Report) followed as well as a series of persecutions of the Holocaust revisionists.