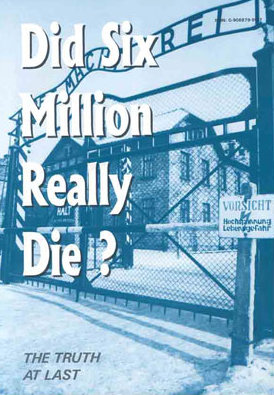 The Author and his book

Willis A. Carto states that "In 1972 in England, Richard Verral, under the pseudonym of Richard Harwood, brought out the first edition of Did Six Million Really Die?[4] Later editions were titled Six Million Lost and Found. Largely a republication of Noontide's The Myth of the Six Million in an illustrated 8.5×11 format, with some additions and textual changes by Verral, millions of copies of this 'new' edition of the Noontide book have since been circulated (including in tabloid newspaper format edition) and it has been translated into several languages."[1]

Verrall (Harwood) had written the booklet while a student at the University of London, having turned to the vexed subject of war crimes under the influence of Porfessor Paul Rassinier, to whom he dedicated his work. He subsequently worked on a booklet on the Main Nuremberg Trial 1945-46.[2]

The publication of it in Canada by Ernst Zundel caused his notorious Holocaust trials.

At the trial revisionist historians in testimonies generally agreed with the statements in the book but also stated that there were some errors and unsupported claims.[3]

Mark Weber testified at the trial. "Weber knew the author, Richard Verrall, was given a small amount of money to quickly produce Did Six Million Really Die? as a journalistic venture. Verrall did not know and did not expect, as those who asked him to make the booklet did not expect, that the booklet would have anywhere near the impact that it had. Richard Verrall was not a specialist in history. He relied on secondary sources and produced the booklet very quickly. Weber knew Verrall and believed he did not maliciously or willfully make false statements of fact in the booklet. He wrote what he believed to be the truth at the time. Weber knew Verrall was very glad to have errors pointed out in the booklet. He wanted errors corrected in subsequent editions and in some cases they in fact had been corrected."[3]

The book Did Six Million Really Die? Report of the Evidence in the Canadian 'False News' Trial of Ernst Zündel -- 1988 stated that "There is no doubt that Did Six Million Really Die? contained errors. It was written hastily by a young University of London graduate, Richard Verrall (who used the pseudonym "Richard Harwood") in the early 1970s. The errors, however, were the type of minor error which one can find in the first edition of any non-fiction book. For example, Verrall wrote that the first allegation of mass murder of Jews was made against the Germans in 1943 by the Polish Jew Raphael Lemkin. In fact, the first charge of mass murder was made by the Allies in a Joint Declaration issued on December 17, 1942. The error played no significant part in the argumentation of the author. The significance and importance of Did Six Million Really Die? lay in its logic, its reasoning and its opinions. It critiqued the weaknesses of the evidence and arguments provided in orthodox "Holocaust" literature and it gave to the reader little-known alternate views of what happened in the camps, such as those of Dr. Russell Barton (who was present in Bergen-Belsen immediately after its liberation) and Thies Christophersen (who was stationed near Auschwitz during the war). It summarized the findings of the French revisionist historian Paul Rassinier, whose works at that time were not known at all in the English-speaking world. In short, Did Six Million Really Die? did what polemical works were meant to do: it provided the reader with an alternate viewpoint on a historical event."[3]