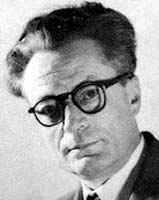 Paul Rassinier (18 March 1906 - 29 July 1967) is the generally acknowledged founder of scholarly Holocaust revisionism. Born in France and trained as an educator, he taught history and geography at a secondary school.

During the Second World War, he co-founded the "Libé-Nord" underground Resistance organization, which helped smuggle Jews from German-occupied France into Switzerland. As a result, he was arrested by the Gestapo in October 1943 and deported to Germany, where he was held prisoner until the end of the war in the Buchenwald and the Dora (Buchenwald) Western Holocaust camps.

After returning home, the French government recognized his courage and suffering with the highest decoration awarded for Resistance activities. He was also elected to the French National Assembly as a deputy of the Socialist party (SFIO).

Until his death, Rassinier was active in anti-war movements, for example as a contributor to the pacifist monthly, La Voie de la Paix.

Rassinier was profoundly distressed by the many lies and myths about the concentration camps that were being circulated. He wrote: "Then one day I realized that a false picture of the German camps had been created and that the problem of the concentration camps was a universal one, not just one that could be disposed of by placing it on the doorstep of the National Socialists. The deportees — many of whom were Communists — had been largely responsible for leading international political thinking to such an erroneous conclusion. I suddenly felt that by remaining silent I was an accomplice to a dangerous influence."

Rassinier became increasingly skeptical of the reports of systematic killings of Jews in gas chambers: "With regard to gas chambers, the almost endless procession of false witnesses and of falsified documents to which I have invited the reader's attention during this long study, proves, nevertheless, only one thing: never at any moment did the responsible authorities of the Third Reich intend to order — or, in fact, order — the extermination of the Jews in this or any other manner. Did such exterminations take place without orders? This question has haunted me for 15 years."

The number of Jews who perished in Europe during the war years, he concluded, could not have been more than about 1.6 million. Among the many who were impressed by Rassinier was the American historian Harry Elmer Barnes.

Rassinier may have been the first Holocaust revisionist to be censored and punished for this. In 1950, a French court gave him a suspended 15-day prison sentence and he was ordered to pay a total of 100,000 francs. The court also ordered the seizure and destruction of all copies of his revisionist book Le Mensonge d’Ulysse.[1]