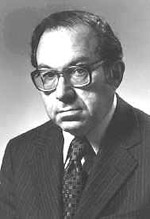 Raul Hilberg (2 June 1926 – 4 August 2007) was an originally Austrian Jew who during his lifetime was often claimed to be the foremost historian on the Holocaust.

His main work was The Destruction of the European Jews, which has been criticized by several Holocaust revisionist, including by Jürgen Graf in the book The Giant With Feet of Clay—Raul Hilberg and his Standard Work on the ‘Holocaust’'.

One by Holocaust revisionists often criticized statement from the book is: "But what began in 1941 was a process of destruction not planned in advance, not organized centrally by any agency. There was no blueprint and there was no budget for destructive measures. They [these measures] were taken step by step, one step at a time. Thus came about not so much a plan being carried out, but an incredible meeting of minds, a consensus -- mind reading by a far-flung bureaucracy." Robert Faurisson answered this in his article "The victories of revisionism" by writing "If it is "incredible" or unbelievable, why then should it be believed? Must one believe the unbelievable?"

Hilberg made now less politically correct statements regarding homosexuals and the Holocaust. See The Myth of a Nazi Extermination of Homosexuals.

"Hilberg began his testimony by explaining, without interruption, his theory about the extermination of the Jews. He was then cross-examined by Zündel's lawyer, Douglas Christie, who was assisted by Keltie Zubko and myself. Right from the start it was clear that Hilberg, who was the world's leading authority on the Holocaust, had never examined a single concentration camp, not even Auschwitz. He had still not examined any camp in 1985 when he announced the imminent appearance of a new edition of his main work in three volumes, revised, corrected and augmented. Although he did visit Auschwitz in 1979 for a single day as part of a ceremonial appearance, he did not bother to examine either the buildings or the archives. In his entire life he has never seen a "gas chamber," either in its original condition or in ruins. (For a historian, even ruins can tell tales). On the stand he was forced to admit that there had never been a plan, a central organization, a budget or supervision for what he called the policy of the extermination of the Jews. He also had to admit that since 1945 the Allies have never carried out an expert study of "the weapon of the crime," that is to say of a homicidal gas chamber. No autopsy report has established that even one inmate was ever killed by poison gas.

Hilberg said that Hitler gave orders for the extermination of the Jews, and that Himmler gave an order to halt the extermination on November 25, 1944 (such detail!). But Hilberg could not produce these orders. The defense asked him if he still maintained the existence of the Hitler orders in the new edition of his book. He dared to answer yes. He thereby lied and even committed perjury. In the new edition of his work (with a preface dated September 1984), Hilnrth systematically deleted any mention of an order by Hitler. (In this regard, see the review by Christopher Browning, "The Revised Hilberg," Simon Wiesenthal Center Annual, 1986, p. 294). When he was asked by the defense to explain how the Germans had been able to carry out an undertaking as enormous as the extermination of millions of Jews without any kind of plan, without any central agency, without any blueprint or budget, Hilberg replied that in the various Nazi agencies there had been "an incredible meeting of minds, a consensus mind-reading by a far-flung bureaucracy...

...Raul Hilberg, in spite of repeated requests, refused to appear again. The defense, having heard rumors of an exchange of correspondence between Pearson and Hilberg, demanded and got the publication of the letters they exchanged and in particular of a "confidential" letter by Hilberg which did not hide the fact that he had some bitter memories of his cross-examination in 1985. He feared being questioned again by Douglas Christie on the same points. To quote the exact words of his confidential letter, Hilberg wrote that he feared "every attempt to entrap me by pointing out any seeming contradiction, however trivial the subject might be, between my earlier testimony and an answer that I might give in 1988." In fact as I have already mentioned, Hilberg had committed perjury and he may have feared being charged with that crime."

—Robert Faurisson on Hilberg in the Ernst Zundel's Holocaust trials.[1]