From Metapedia
(Redirected from French Resistance)
Jump to: navigation, search 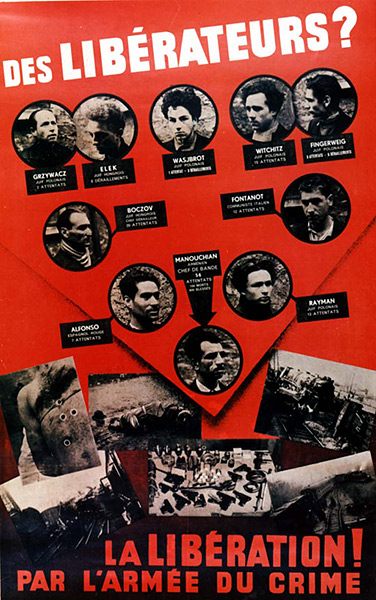 Poster exposing the communist Jews and foreign terrorists who claimed to be "French liberators".

The French resistance refers to the bands of mostly communist terrorists[1] and non-French ethnic minorities (Jews, Armenians, British, etc) in France during World War II who conspired against the legal government of France, (which had relocated from Paris to Bordeaux to Clermont, and finally Vichy), as well as the German Military Administration in France, following France's defeat in the Battle of France and the subsequent agreed Armistice requested by the French Government in June 1940.

Everything changed for the French Communists with the German invasion of the Soviet Union. Although many Communists had joined the Resistance as individuals, the party as a whole had no clear line to follow. Now, in June 1941, it was clear at last....They became the most dynamic and vigorous element in the French Resistance......Both the Germans and Vichy regarded the communists as by far the most dangerous part of the resistance after June 1941; they were exceptionally prominent in the Maquis and in terrorist warfare generally. The French Government regarded the Communists as "bandits" and as "terrorists". Thousands were identified, rounded up, and shot.[2]

The best known of the terrorist groups were those who, from 1942 onwards, became increasingly serviced by the London offices of the renegade Charles de Gaulle, who, supported by figures such as Churchill and Guy de Rothschild as well as the intelligence services of the United Kingdom, conspired to undermine the Franco-German armistice signed by the French Government in June 1941.

Admiral Darlan called the Resistance "the unholy union of Gaullism and Communism."

Aside from the factional and tiny Gaullist groups, who operated almost completely in the 'occupied' zone, there were also some openly terrorist elements. One of the best known of the latter organisations was the Francs-Tireurs et Partisans (FTP), which was attached to the French Communist Party and the Maquis. Many of their members were Jews and other foreigners. The National Council of the Resistance was the co-ordinating body between these various groups. There were some elements who, while supporting the French State, were hostile to the German military zone for nationalist reasons. The latter group included figures such as François de La Rocque and Charles Maurras.