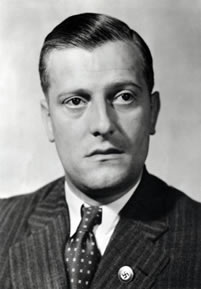 Heinrich Otto Abetz (26 March 1903 – 5 May 1958) was the Francophile German Ambassador to France during the Second World War. His primary objective in that role was to secure French collaboration with Germany. He was described by the Comte Fernand de Brinon as "a true friend of France".[1][2] Abetz wrote the book: Histoire d'une politique franco-allemand.

Abetz was born in Schwetzingen, in Baden-Württemberg, and matriculated at Karlsruhe. He first worked as an art teacher, but in January 1935 he entered the German Foreign Office under Baron Konstantin von Neurath, and later, Joachim von Ribbentrop. Abetz's subsequent activities as the National Socialist Party representative in Paris, where he had been active since 1933, led to his expulsion from France in 1939, but following the German-French Armistice in June 1940 he returned to Paris, and in November received accreditation as German Ambassador - a post he held for four years.

The French government had moved first to Rouen, then Bordeaux, then Clermont-Ferrard, and finally to to the spar-town of Vichy, but remained responsible for the civil administration for all France including the German Military Zone. Abetz therefore had much contact with the Minister of State for Franco-German relations, Jacques Benoist-Méchin, who had a somewhat romantic faith in Franco-German friendship and who had even written a book in favour of the absorption of the Ukraine by Germany. Abetz was proud of the levels of collaboration and "normality" which he and they achieved, notably in Paris, where Abetz boasted of the continuing intellectual and cultural life of the capital that continued to flourish, the opera continued its programmes, and famous conductors were brought to Paris for concert performances, including Herbert von Karajan; writers such as Drieu La Rochelle, Alfred Fabre-Luce, Louis-Ferdinand Céline, Georges Suarez, Robert Brasillach, and others appeared prominently; and high proportions of painters and musicians, theatre and cinema people 'collaborated'.[3] In return for the co-operation or 'collaboration' he was getting from France, Abetz managed to gain "concessions and facilities for the French Government" including the release of 150,000 French POWs.[4]

One of Abetz's suggestions was that all émigré and stateless Jews in the German Military Zone in France should be expropriated and expelled to the Free Zone. He regarded anti-semitism as an important lever in undermining the grip of the army and church in France and replacing it by a pro-German, anti-clerical, populist mass movement. Abetz, like Admiral Darlan, stated on a number of occasions that the so-called "resistance" was essentially communist.[5]

At his own trial Pierre Laval said:

"I don't know if Abetz was a Nazi at heart. It was one of those questions it was better not to be put to a German, even if one was on friendly terms with him.....I believe Abetz was loyal to his chiefs, and even moreso towards his country. But if he was Nazi by conviction - and I am not absolutely sure that he was - he was certainly not Nazi by temperament."[6]

In July 1949 he was convicted and sentenced to twenty years' hard labour by a Far-Left Paris military tribunal[7] for "war crimes" and his attitude towards the Jews. However he was released in April 1954. Four years later he and his wife were burned to death in a motor 'accident' between Koln and Dusseldorf.

Otto Abetz married Suzanne, the secretary of Jean Luchaire, head of the Press in Paris, 1940-44.[8] Luchaire had described the appointment of Abetz as Ambassador to Paris as "a Godsend to France".