Ukraine is a country in Eastern Europe. It borders Russia to the East and north-east, Belarus to the north, Poland, Slovakia and Hungary to the west, Romania and Moldova to the southwest, and the Black Sea and Sea of Azov to the south. The Ukraine as a sovereign state in its current form is of recent origin being founded in 1992. Until 1991 (inclusive) it was one of the Union of Soviet Socialist Republics and its borders remain those of that administrative region. The historic city of Kiev (Kyiv) is the country's capital. The chief city of the Western Ukraine (Galicia) is Lviv.

Historically the country is divided into two spheres: the ancient principality of Galicia in the West, which looks to the Germanic countries, and to a lesser extent Poland, culturally as influences, and the Russian-speaking South and East, which traditionally looked more to Moscow. The country is a majority Orthodox religiously, but Uniate Catholics predominate in the West and those of the Orthodox faith there are also in conflict with the contemporary Moscow Patriarchate. The nation considers itself the heirs of the Cossacks.

The President of the Ukraine, since May 2019, Volodymyr Zelenskyy, is Jewish. In April 2019 the New York Times celebrated that after Zelensky is sworn in, alongside [then] Prime Minister Volodymyr Groysman, Ukraine will be the only country outside of Israel where the heads of state and government are both Jewish.[7] In December 2021 the Kyiv Jewish Forum celebrated 30 years of Ukraine-Israel ties.[8].[9]

On the 24th February 2022 Russia commenced an invasion of Ukraine[10] in order to stop it becoming a USA satellite state and joining NATO.

Over what is today known as the Ukrainian steppe, on both sides of the middle Dnieper, the Chronicle of Nestor (Nestor lived c1056 - c1114) tells us that from the eighth to the first century BC the Scythians occupied the region where Kiev stands, and from which tribes the territory kept its name long after their demise. Then came the Sarmatians whose civilisation was impregnated with Hellenism and Asiatic influences and which was destroyed by the Goths in the third century. At this juncture appear the Antae, who, according to the latest research, form a link between the Helleno-Scythian-Sarmatian civilization and the population of the later centuries. It is practically certain that the Antae were Slavs; but they are unlikely to have inherited very much from their predecessors, who had been swept away in the welter of successive invasions. It is known that the Antae were attacking the Byzantine Empire in 518AD. In the ninth century the names of the Slav peoples still stood for no more than groups of tribes organised on a patriarchal basis. As populations grew, fortified towns surrounded by palisades became accepted centres of trade and local power, and Kiev is one of the more prominent examples. The Slavs of the steppe at this time still paid tribute to the Khazars.[11] From at least the 9th century, the territory of present-day largely eastern Ukraine was a centre of a medieval eastern Slavic civilization forming the state of Kievan Rus[12]. For the following several centuries the territory was divided among a number of regional powers.[13]

It is said that no-one was more influential in the long run upon Ukrainian culture than Mikhail Hrushevsky (1866-1934), the founding father of Ukrainian history. Though employed in St. Petersburg, Hrushevsky could only publish freely in Lemberg, and his Traditional Scheme of Russian History (1904) demolished the widespread Russo-centric view that Moscow and its successors had been the sole legitimate heirs of Kievan Rus'. The Ukrainian Awakening was largely due to his works and those of his disciple, Ivan Franco (1856-1916), who became one of the fathers of modern Ukrainian literature, alongside Taras Shevchenko, the poet. For the Jews, Meir Balaban 91877-1942), a graduate of Lemberg, wrote a series of important works on the Jews of Krakow, Lemberg and Lublin, huge communities, earning the reputation as the pioneer of Polish-Jewish history.[14] The late 20th century ultra-pro-Polish (but English) historian, Norman Davies, waxes lyrical on the Polish influence in Galicia at the expense of all others.[15] 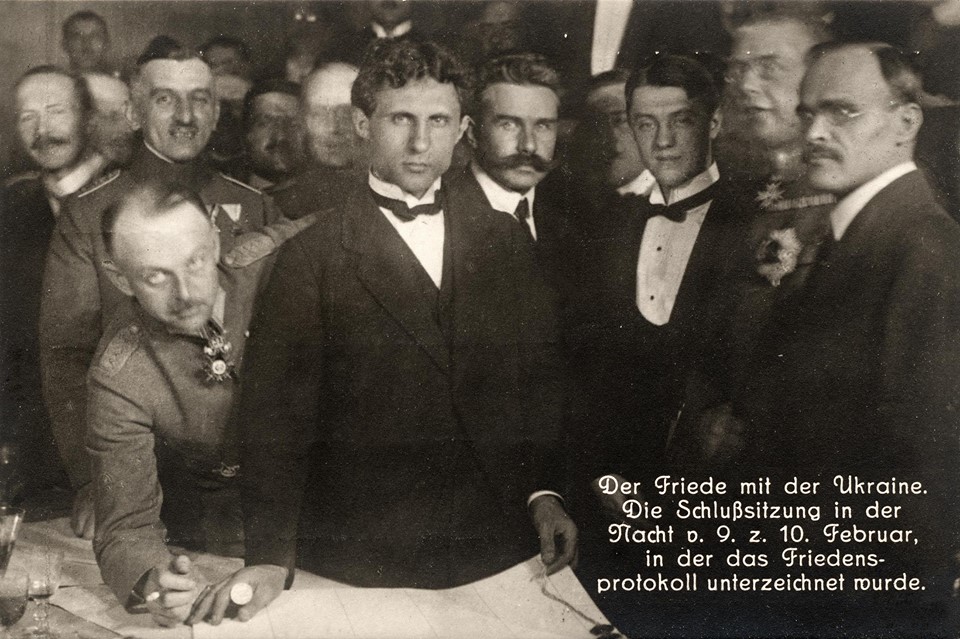 The Ukraine enjoyed a brief period of, firstly, autonomy, and then quasi-independence, in the year which followed the February Revolution in Russia. In July 1917 a huge debate took place in the Russian Duma over autonomy for Ukraine (being that part of it in Russia, not Galicia which was Austrian), which was violently opposed by a majority, and which caused a major parliamentary crisis[16] resulting in the resignation of the Premier, Prince Lvov and his Cadet Party and the fall of the government. Ukraine (in Russia) then declared its independence from Russia, and on February 9, 1918 a Treaty of Peace between Ukraine and the Central Powers was signed at Brest-Litovsk guaranteeing a 'Free Ukraine'.[17] The victorious Western plutocratic Allies, however, refused to recognise the Treaty of Brest-Litovsk and declared it null and void in early 1919. Meanwhile, in the winter of 1918, the Central Powers armies had been evacuated and the entire area then became submerged in the Russian Civil War[18][19]. (See also Galicia).

Upon the final Bolshevik victory, much of today's Ukraine east of Galicia found itself as one of the artificial Soviet Republics from 1922, part of the murderous Communist Soviet Union[20]. During Soviet rule, in 1932–1933 millions of Ukrainian people were systematically starved to death in a man-made famine known as Holodomor[21]. 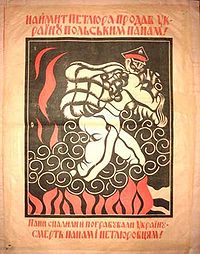 Galicia and Ruthenia were, at the 1919 Paris Peace Conferences, hotly contested. In December 1918 a People's Republic under a 'Directory' presided over by Symon Petlura had been proclaimed. However he subsequently formed an alliance with Poland in order to defeat the Bolsheviks, offering Poland Galicia. Removed from the Austrian sovereignty they had enjoyed since 1772, the indigenous population of Galicia and Ruthenia were anxious not to be placed in the newly resurrected state of Poland. This alliance provoked a huge backlash amongst Ukrainian nationalists and peasant committees in Galicia who were "manifestly anti-Polish and wanted to destroy everything Polish regardless of class distinction". There were dramatic reports of Polish landed proprietors being burnt alive and the prisons "crammed with Poles".[22] Petlura was overthrown after a brief duration by the Bolsheviks, who occupied Kiev in February 1919. (Petlura was later assassinated in broad daylight in the centre of Paris, on 25 May 1926, by the Russian Jewish anarchist, Sholom Schwartzbard.) During the Summer of 1919 Poland's Marshal Pilsudki, with his now French-supplied army, invaded Galicia, capturing Lemberg, and then with a force of Poles and 'reliable' Ukrainian nationalists made a mad dash towards Kiev, taking it on May 6, in a desperate bid to transform all the Ukraine into a Polish satellite state.[23] The Poles were only able to hold on there for five weeks before their long retreat to "the gates of Warsaw" in the Russo-Polish War.

Poland's champions, France and the USA, now pressed for inclusion of Galicia and Ruthenia etc., into the new Poland. But "the British Government was opposed to anything leading to a final union of Galicia and Poland", pointing out that "a large majority of the population in Eastern Galicia in particular was not Polish."[24] Towards the end of 1919, on December 2, the French then raised the issue of what they termed 'Western Galicia' saying it was "necessary to recognise the sovereignty of Poland" there. Paderewski (for Poland) then referred to Ruthenians and Ukrainians as "primitive people who only exist because of our assistance and practical help".[25]

The end result was a compromise (for the Allies) and a victory, of sorts, for Poland, being that Galicia would provisionally become a League of Nations Mandate with autonomy under Polish administration (not sovereignty), for 25 years. There were numerous conditions, one of which was that Poland could not exercise military conscription there and that the indigenous population would have the same representation in the Polish Diet as anywhere in Poland.[26] Despite the expressed concerns about Polish nationalist "excesses" should all these provinces be under their government, these proved correct, as the administration and education were strongly Polonized and the Ukrainian language and culture suppressed. The Poles ruled with a harsh military presence, putting down strikes and unrest in 1931 and 1934 - in the latter year Ukrainian patriots assassinated Bronisaw Pieracki, the Minister of the Interior.[27]. In 1930 the UK's Manchester Guardian reported: "Polish terrorism in Ukraine is worse today than anything else in Europe. Ukraine has become a land of despair and destruction. Ukrainians' rights are guaranteed under international law, but the League of Nations is deaf to all appeals and lectures, and the rest of the world knows nothing about it and doesn't care.[28]

World War II saw the invasions of Poland and the Soviet Union by Greater Germany and for a time the communists were drive out of Ukraine. Many Ukrainian patriots formed military units to fight alongside the Germans in an 'anti-Bolshevik' war against Stalin's Russia and their occupation by the latter.

With the defeat of Germany in 1945 the Ukrainian Soviet Socialist Republic was reconstituted and its territory was enlarged after the Second World War to include Galicia proper, as well as some other lands west of the Dneiper; and again, in 1954, with the transfer of the Crimea.

In the so-called Free World campaigns highlighting Communist atrocities in the Ukraine continued, and Ukrainian nationalist groups outside the old Soviet Bloc continued their efforts for an independent Ukraine. Many conservative organisations in the West gave their support, amongst them the Conservative Monday Club and the Western Goals Institute[29][30] in the United Kingdom. Ukrainian expatriates kept their country's culture alive with many publications.[31]

Ukrainian nationalists, taking advantage of the collapse of communism/the Soviet Union and a prostrate Russia, declared independence in December 1991[32] using as their borders the former administrative Soviet Socialist Republic borders.

In March 2014 the Crimea returned to Russian sovereignty following a referendum organised and held there by the government of the Crimea which had been elected under Ukrainian sovereignty. This referendum was monitored by western observers who declared it free and fair.[33] It has been said by Western/USA propaganda that Crimea was "invaded" by Russia. This is untrue. After 1991 considerable numbers of Russian army and naval personel continued to be based in Crimea, by agreement.

During the 2014 quasi-conflict between Russia and the Ukraine, leaflets were distributed saying Jews in the Ukraine must register with a non-existent government agency. This was revealed to be a hoax. An investigation traced the hoax not to anti-semites, but to the ADL spreading another hate crime hoax.[34][35]

In February 2014, president Viktor Yanukovych was ousted from office in a coup d'etat, allegedly financed by USA.[36]

On 24 February 2022 war broke out between Russia and Ukraine, when Russia invaded at several points along the border. Numerous reasons for this have been given, the most well-known being that Russia would not accept Ukraine becoming a satellite state of the USA or Ukraine joining NATO. The question of the old administrative borders of the former Ukrainian Soviet Socialist Republic, which independent Ukraine adopted, are also called into question by Russia as requiring revision. From at least 2008 Russia has been in negotiations with Ukraine to no avail. In 2014 a coup took place in Ukraine which ushered in a pro-American and pro-Western Government and President.

On 1st March the Jewish Telegraph Agency reported that the so-called Holocaust Memorial at Babyn Yar in Kiev had been hit by rockets.[37][38]