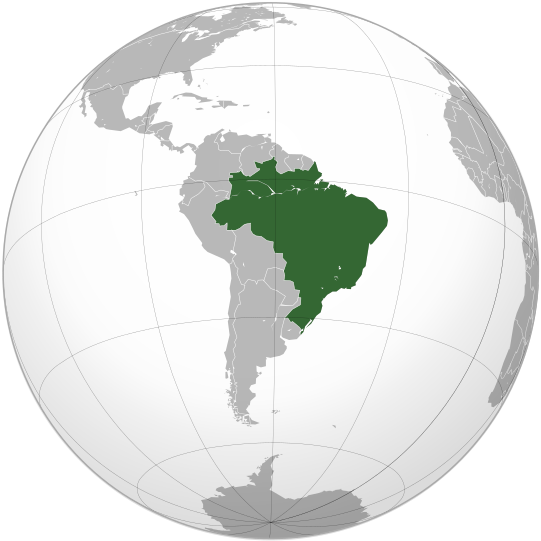 Brazil, is a country in South America. It is the fifth-largest country by geographical area, the fifth most populous country, and the fourth most populous democracy in the world. Bounded by the Atlantic Ocean on the east, Brazil has a coastline of over 7,367 kilometres. It borders Venezuela, Suriname, Guyana and the department of French Guiana to the north, Uruguay to the south, Argentina and Paraguay to the southwest, Bolivia and Peru to the west, and Colombia to the northwest. Numerous archipelagos are part of the Brazilian territory, such as Penedos de São Pedro e São Paulo, Fernando de Noronha, Trindade e Martim Vaz and Atol das Rocas.

Brazil is cut through by the Equator and Tropic of Capricorn and is home to varied fauna and flora, as well as extensive natural resources. The Brazilian population tends to concentrate along the coastline in large urban centers. While Brazil has one of the largest populations in the world, population density is low and the inner continental land has large areas of low population. The official language is Portuguese and Catholicism is the predominant religion.

Brazil was colonized by Portugal from 1500 until its independence in 1822. The republican system has been adopted since 1889, although its parliament dates back to 1824, when the first constitution was ratified. Its current Constitution defines Brazil as a Federative Republic. The Federation is formed by the indissoluble association of the States, the Federal District, and the Municipalities. There are currently 26 States and 5,564 Municipalities.

Despite its important Empire during the Peter II reign, during the XX century Brazil witnessed a big degradation of the society and its cultural values. The Catholic church lost the power that once had and the traditionalist and religion orientated population become some of the most degenate in the world, making Brazil becoming famous for its carnival, prostitution, no moralism and violence. Althought the jewish population is very small, they owns the media almost for completely. U.S.A. and IMF also have a big control of Brazil. There is a big economic and social difference between states, and in urban areas is visible a big social inequality, with neighbourhoods divided by social class. The government and public administration is famous for the lack of honesty and public waste of money.

Probably the first inhabitants of Brazil were australoid as is demonstrate by a fossil called Luzia, the oldest found in America[1] . The solutrean hypothesis also argues that caucasoids have reached America before the asians. When the Portuguese arrived in Brazil, the Indians who lived there were of Asian origin who may have come more recently and exterminated the peoples who inhabited America before.

The Brazilian territory was then was divided into twelve hereditary captaincies. Initially the settlements were on the coast especially where the cultivation of sugar cane was the main economic activity. Began the period of slavery, Africans that were already slaves in his native continent were purchased and brought to Brazil.

Then, the bandeirantes, explorers from São Paulo began to explore the countryside and expanded the territory beyond the limits of the Treaty of Tordesillas. During these expeditions, they discovered gold, which was decisive for the settlement of the countryside of Brazil.

Between 1580 and 1640, Portugal togheter with its colonies was part of Spain, so Brazil was under spanish rule. During 1630 to 1654, the Dutch did a settlement in northeast Brazil (at the time the north portion on Brazil) what is called New Holland.

On September 7, 1822, Dom Pedro de Alcântara proclaimed the independence of Brazil in relation to the united kingdom of Portugal, Brazil and Algarves, and founded the Empire of Brazil, being crowned as Emperor Dom Pedro I. He reigned until 1831, when he abdicated and passed the Brazilian Crown to his son, Dom Pedro de Alcântara, which was only five. At fourteen, in 1840, Dom Pedro de Alcantara (son) had declared his majority, being crowned emperor in the following year, as Dom Pedro II. The new emperor extinguished the slave trade in 1850. Gradually, European immigrants replaced the slaves. In 1888, Princess Imperial of Brazil, D. Isabel of Braganza, daughter of Dom Pedro II, signed the Golden Law, which abolishes slavery in Brazil.

On November 15, 1889, happened the proclamation of the republic by Marshal Manuel Deodoro da Fonseca (freemason) and begins the Old Republic, that end in 1930 with the arrival of Getúlio Vargas to power.

During the WWII Brazil was forced by the U.S.A. to declare war against the Axis powers, countries that until this time had always been friendly and were a model for the Brazilian government and society. During this time, most of the immigrants were from the Axis nations, and the government started a big persecution against these people.

Foreign languages were forbidden to be teached or spoken. Police controlled cities like the German Blumenau, where most people were spoke German. A person could be arrested if he spoke it in public. Italians found it easier to adapt because of the language and culture similiarity, while the Japanese used to be more isolated. Many Japanese were confinated.[2]

National Socialism in Brazil was practiced by the brazilian section of the NSDAP, founded in 1928 in Timbó (Santa Catarina state) and closed by the authorities in 1938 due to anti-German sentiment. It was the biggest National Socialist Party outside Germany.

Brazil has had large importation of Black slaves. A lack of White women contributed to extensive race mixing with Amerindians and Blacks. The slave trade was prohibited in 1850 and slavery was abolished in 1888. Brazil encouraged immigration of large numbers of Europeans in order to make Brazil more White. There was little assimilation/integration between the different immigrant groups and other groups. After 1930, various forced measures attempted to change this, including the implementation of ethnic immigration quotas, which caused further large-scale immigration of Whites to cease. More recently, affirmative action, anti-White education in schools, and other similar measures have been implemented, contributing to White flight from Brazil.[3][4]

The South is My Country movement is one example of support for the independence of Brazil's southern, wealthier, and more White states. This can be seen as attempted White flight.[5] There is widespread racial segregation regarding neighborhoods. This also applies to persons having similar incomes and also between Blacks and Mulattoes.[6] A 2015 articles stated that

"For many Americans, Brazil means Rio de Janeiro, Carnival, pretty women, and a mixed-race land of no racial tension. This makes Brazil a potential model for the United States: Immigration from the Third World will enrich us and miscegenation will make us one. In fact, Brazil is a nation of low average intelligence, very high crime rates, an aversion to work, and widespread corruption."[3]

A German Brazilian (German: Deutschbrasilianer, Portuguese: teuto-brasileiro or germano-brasileiro; also: alemão) is a Brazilian person of ethnic German ancestry or origin. German Brazilians live in the entire country, although the overwhelming percentage is found in the country's South Region, mainly in the states of Rio Grande do Sul and Santa Catarina, with lesser but still significant degree in the Southeast Region. German dialects together make up the second most spoken first language in Brazil. A few Brazilian municipalities have Brazilian Hunsrückisch and Germanic Pomeranian as co-official with Portuguese. They are located in Southern Brazil and Espírito Santo. About 12 million Brazilians have at least some German heritage, 1.5 million speak German.