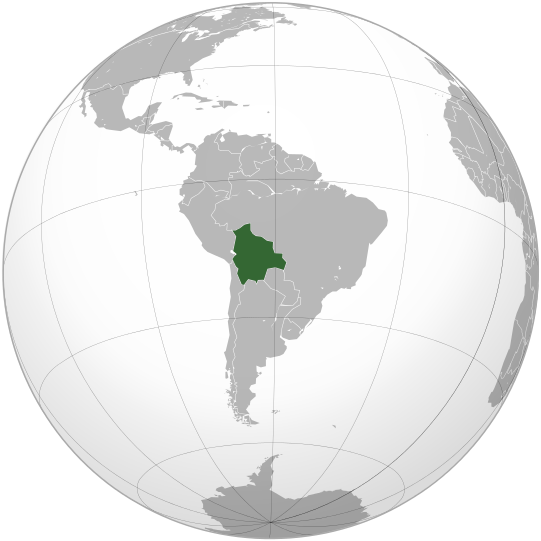 The Republic of Bolivia República de Bolivia, named after Simón Bolívar, is a landlocked country in central South America. It is bordered by Brazil on the north and east, Paraguay and Argentina on the south, and Chile and Peru on the west. 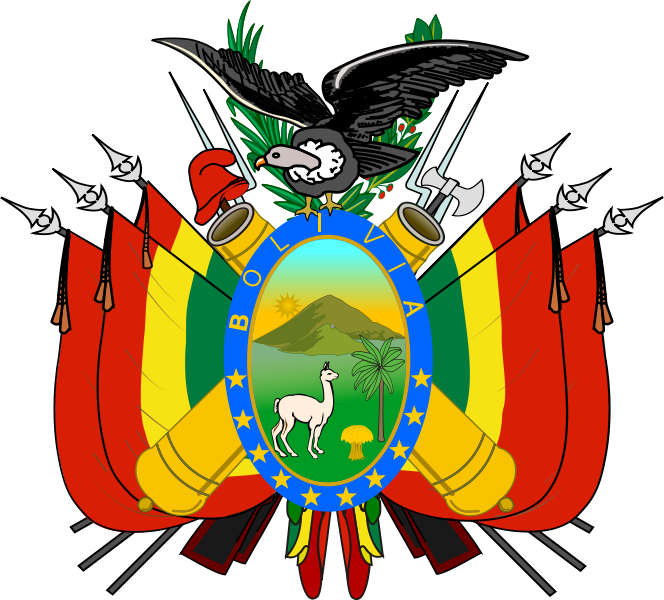 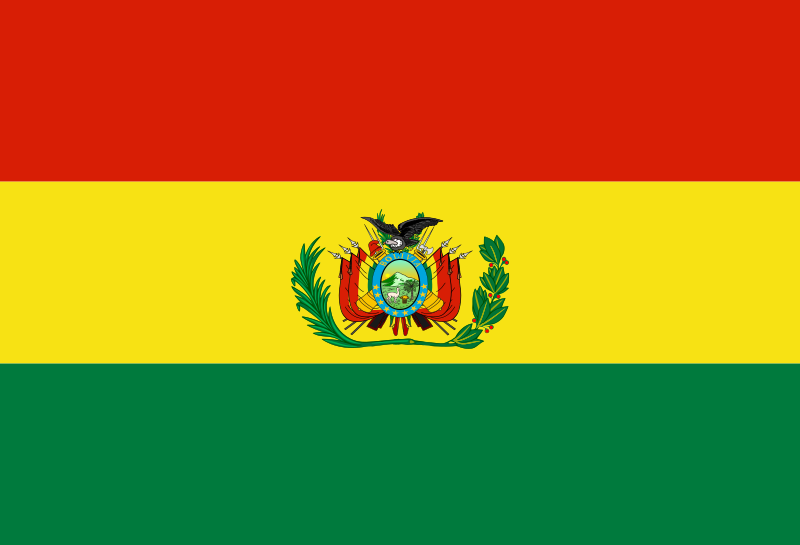 Flag of Bolivia (military) since 1851

The territory now known as Bolivia was called "Upper Peru" and was under the authority of the Viceroy of Lima. Local government came from the Audiencia de Charcas located in Chuquisaca (La Plata — modern Sucre). Bolivian silver mines produced much of the Spanish empire's wealth. A steady stream of natives served as labor force (the Spanish employed the pre-Columbian draft system called the mita).[1] As Spanish royal authority weakened during the Napoleonic wars, sentiment against colonial rule grew.

The Republic and economic instability (1809)

Independence was proclaimed in 1809, but sixteen years of struggle followed before the establishment of the republic, named for Simón Bolívar, on August 6, 1825 (see Bolivian War of Independence).

In 1836, Bolivia, under the rule of Marshal Andres de Santa Cruz, invaded Peru to reinstall the deposed president, General Luis Orbegoso. Peru and Bolivia formed the Peru-Bolivian Confederation, with de Santa Cruz as the Supreme Protector. Following tensions between the Confederation and Chile, war was declared by Chile on December 28, 1836. Argentina, Chile's ally, declared war on the Confederation on May 9, 1837. The Peruvian-Bolivian forces achieved several major victories: the defeat of the Argentinian expedition and the defeat of the first Chilean expedition on the fields of Paucarpata near the city of Arequipa.

On the same field the Paucarpata Treaty was signed with the unconditional surrender of the Chilean and Peruvian rebel army. The treaty assured the Chilean withdrawal from Peru-Bolivia, the return of captured Confederate ships, normalized economic relations, and the payment of Peruvian debt to Chile by the Confederation. Public outrage over the treaty forced the government to reject it. The Chileans organized a second expeditionary force, and attacked the Peru-Bolivian confederation, defeating the Confederation on the fields of Yungay using the same arms and equipment Santa Cruz had allowed them to retain. After this defeat, Santa Cruz fled to Ecuador, and the Peruvian-Bolivian Confederation was dissolved.

Following the independence of Peru, General Gamarra, the Peruvian president, invaded Bolivia, under the Peruvian flag. The Peruvian army was decisively defeated at the Battle of Ingaví on November 20, 1841, where General Gamarra himself was killed. The Bolivian army under General José Ballivián then mounted a counter-offensive managing to capture the Peruvian port of Arica. Later, both sides signed a peace in 1842 putting a final end to the war.

Because of a period of political and economic instability in the early to middle nineteenth century, Bolivia's weakness was demonstrated during the War of the Pacific (1879–83), during which it lost its access to the sea, and the adjoining rich nitrate fields, together with the port of Antofagasta, to Chile. Since independence, Bolivia has lost over half of its territory to neighboring countries because of wars. Bolivia also lost the state of Acre (known for its production of rubber) when Brazil persuaded the state of Acre to secede from Bolivia in 1903 (see the Treaty of Petrópolis).

An increase in the world price of silver brought Bolivia a measure of relative prosperity and political stability in the late 1800s. During the early part of the twentieth century, tin replaced silver as the country's most important source of wealth. A succession of governments controlled by the economic and social elite followed laissez-faire capitalist policies through the first thirty years of the twentieth century.

Living conditions of the native people, who constituted most of the population, remained deplorable. Forced to work under primitive conditions in the mines and in nearly feudal status on large estates, they were denied access to education, economic opportunity, or political participation. Bolivia's defeat by Paraguay in the Chaco War (1932–35) marked a turning-point.[2][3][4]

Rise of the Nationalist Revolutionary Movement (1951)

The Nationalist Revolutionary Movement (NRM) emerged as a broadly based party. Denied their victory in the 1951 presidential elections, the MNR led the successful 1952 revolution. Under President Víctor Paz Estenssoro, the MNR , having strong popular pressure, introduced universal suffrage into his political platform, and carried out a sweeping land-reform promoting rural education and nationalization of the country's largest tin-mines.

Twelve years of tumultuous rule left the MNR divided. In 1964, a military junta overthrew President Paz Estenssoro at the outset of his third term. The 1969 death of President René Barrientos Ortuño, a former member of the junta elected President in 1966, led to a succession of weak governments. Alarmed by public disorder and the rising Popular Assembly, the military, the MNR, and others installed Colonel (later General) Hugo Banzer Suárez as President in 1971. Banzer ruled with MNR support from 1971 to 1974. Then, impatient with schisms in the coalition, he replaced civilians with members of the armed forces and suspended political activities. The economy grew impressively during most of Banzer's presidency, but human rights violations and eventual fiscal crises undercut his support. He was forced to call elections in 1978, and Bolivia again entered a period of political turmoil.

Elections in 1979 and 1981 were inconclusive and marked by fraud. There were coups d'état, counter-coups, and caretaker governments. In 1980, General Luis García Meza Tejada carried out a ruthless and violent coup d'état that did not have popular support. He pacified the people by promising to remain in power only for one year. (At the end of the year, he staged a televised rally to claim popular support and announced, "Bueno, me quedo," or, "All right; I'll stay [in office]."[5] He was deposed shortly thereafter.) His government was notorious for human-rights-abuses, narcotics-trafficking, and economic mismanagement; during his presidency, the inflation that would later cripple the Bolivian economy could already be felt. Later convicted in absentia for various crimes, including murder, García Meza was extradited from Brazil and began serving a thirty-year sentence in 1995.

After a military rebellion forced out García Meza in 1981, three other military governments in fourteen months struggled with Bolivia's growing problems. Unrest forced the military to convoke the Congress elected in 1980 and allow it to choose a new chief executive. In October 1982, twenty-two years after the end of his first term of office (1956-60), Hernán Siles Zuazo again became President.