From Metapedia
(Redirected from Roman Catholicism)
Jump to: navigation, search 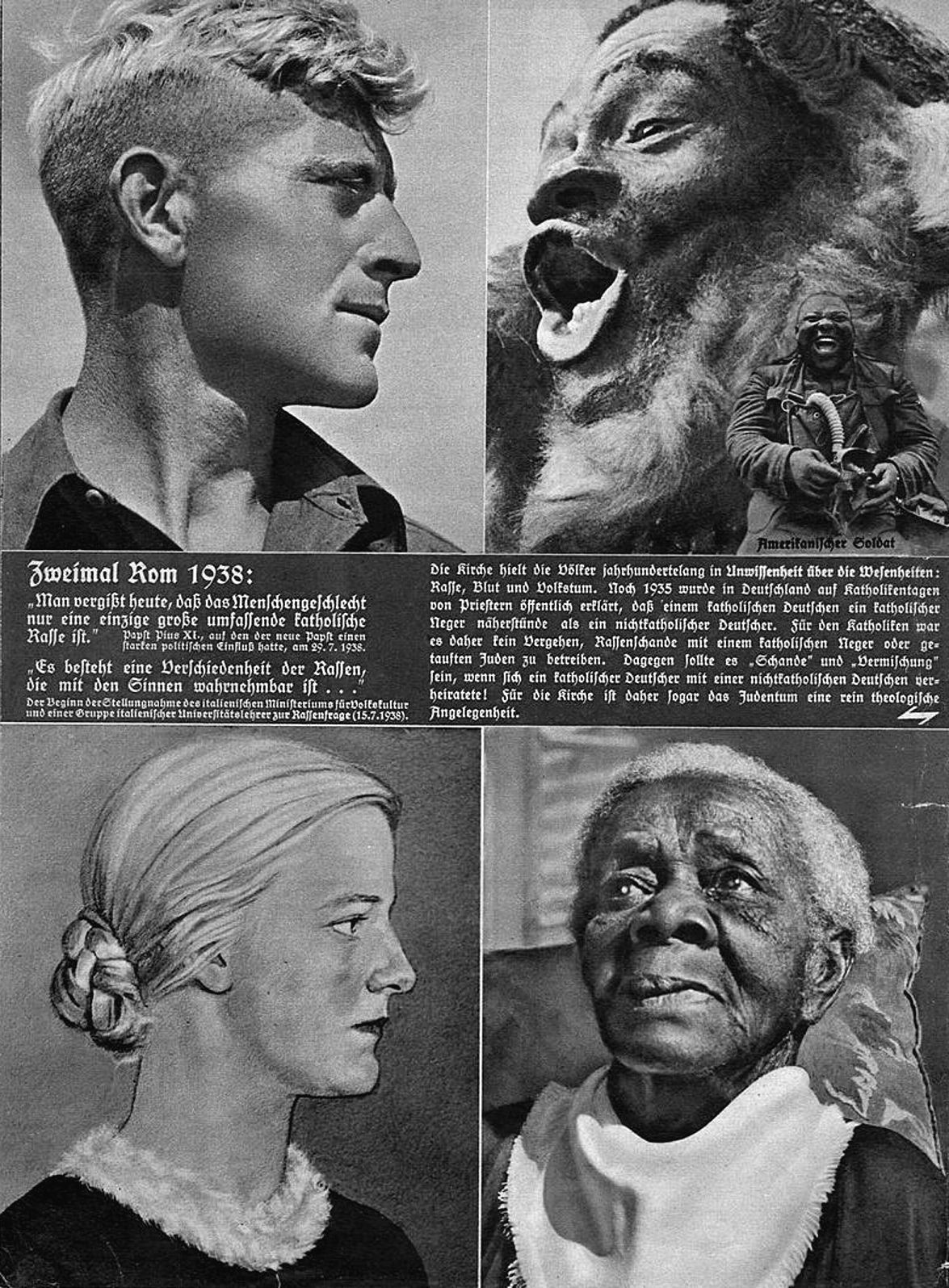 Critism of a German leaflet from early 1940s against Catholic doctrine, in which racial differences are ignored and race mixing is condoned, but it was condemned an infamy for a Catholic man to marry a non-Catholic woman. The leaflet criticises the fact, that Catholic priests in Germany were told, that a Catholic negro stands closer to them than German non-Catholics. It also criticises the ideology of Pope Pius XI, stating 1938 "Catholic means universal" and condemning Germany's and Italy's conservation of racial identity as "racism", although excluding all other religions from the "universal catholic race" is truely arrogant and racist:
"We regard racism and exaggerated nationalism as barriers raised between man and man, between people and people, between nation and nation. ... All men are, above all, members of the same great kind. They all belong to the single great family of the living. Humankind is therefore a single, universal catholic race."[1]

Roman Catholics were once almost exclusively Europeans, but now many are non-Europeans and increasing rapidly so during the nineteenth and twentieth centuries. Regarding a general description, see the many general encyclopedias in the "External links" section.

Pope Francis, the current pope, supports various politically-correct positions, such as mass immigration into Europe and the United States.

Roman Catholic priests are required to be celibate. This was imposed upon the clergy with force in 1123 and again in 1139 and has been argued to have contributed to dysgenics. Another controversy is Homosexuality and the Catholic Church.

The Roman Catholic Church was and is an influential opponent of birth control, which earlier has been argued to counter-act dysgenics among Europeans (as discussed in the article on dysgenics), but that now contributes to the rapid population growth of non-Whites in regions such as Sub-Saharan Africa. (See also White demographics).

Freemasonry has had an antagonistic relationship with the Roman Catholic Church, which still prohibits its members from being Freemasons.[2]

The Roman Catholic Church (as well as the Orthodox Church) are completely opposed to female priests, described by some Bishops as "heretics". As early as 494 AD, in response to reports that women were serving at the altar in the south of Italy, Pope Gelasius I wrote a letter condemning female participation in the celebration of the Eucharist.

The teaching of the Roman Catholic Church, as emphasized by Pope John Paul II in the apostolic letter Ordinatio sacerdotalis, is that "the Church has no authority whatsoever to confer priestly ordination on women and that this judgement is to be definitively held by all the Church's faithful". This teaching is embodied in canon law (1024) and the Catechism of the Catholic Church by the canonical statement:

Insofar as priestly and episcopal ordination are concerned, The Church teaches that this requirement is a matter of divine law; it belongs to the deposit of faith and is unchangeable. In 2007, the Holy See issued a decree stating that attempted ordination of a woman would result in automatic excommunication for the women and Bishops attempting to ordain them, and in 2010, that attempted ordination of women is a "grave delict" and a "crime against The Faith".[3][4]

The relationship between Judaism and the Roman Catholic Church is complex, with frequent accusations of anti-Semitism being leveled at Rome, in particular their standpoint that 'The Jews murdered Our Lord Jesus Christ', a position they held firmly until the 21st century. However The Church generally gave Judaism a special exemption by allowing it to continue to exist, instead of prohibiting it when it had the power to do so, as was the case for all other non-Christian religions and Christian heresies. Regarding some of the controversies, see the articles on:

Professor Kevin MacDonald has argued that the Roman Catholic Church in part aroused an anti-Jewish movement due to resource competition between Jews and non-Jews and in response to the Jewish group evolutionary strategy.[5][6]