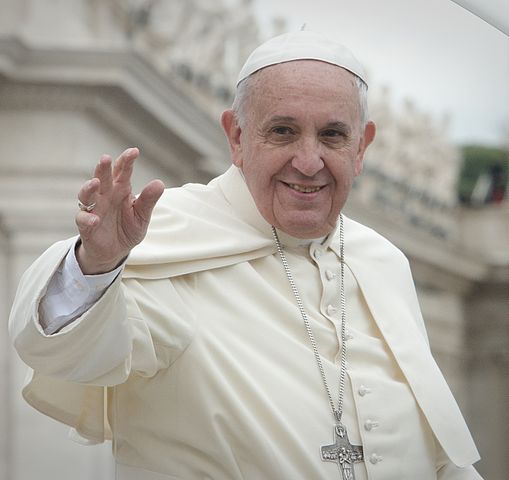 Some notable policies include support for Jewish interests and support for mass immigration to White countries.

Francis is the first Jesuit pope, the first from the Americas (Argentina), the first from the Southern Hemisphere, and the first pope from outside Europe since the Syrian Gregory III, who reigned in the 8th century. He has been argued to support some aspects of liberation theology, influential in Latin America and among Jesuits.

The ADL has stated that "ADL Congratulates New Pope Francis [...] There is much in his record that reassures us about the future [...] Under his leadership in Buenos Aires, Cardinal Jorge Bergogolio made important strides in maintaining positive Catholic-Jewish relations [...] Cardinal Bergoglio maintained a close relationship with the Jewish community in Argentina [...] In 2010, he together with Argentinian Rabbi Abraham Skorka, published the book “On Heaven and Earth” addressing issues of interfaith dialogue. The new Pope’s sensitivity to the Jews emerges from this work in his comments on the Church’s approach to the Jewish people since Vatican II, the Holocaust and the Arab-Israeli conflict."[1]

During his first official trip outside Rome since his election, in highly symbolic and "dramatic pro-immigrant outing," Francis went to Lampedusa, an Italian island in the southern Mediterranean and a primary European entry point for African and often Muslim immigrants. Francis there, and elsewhere, has issued many pro-immigration statements. The immigration issue has been stated to be an important, and personal, one for Francis, whose father emigrated from Italy to Argentina due to Italian fascism. "As archbishop of Buenos Aires," Sky News noted, "he denounced the exploitation of migrants as 'slavery' and said those who did nothing to help them were complicit by their silence."[2][3]

A 2017 article stated that "a powerful force is rallying to the side of migrants: the Roman Catholic Church led by Pope Francis. Catholic cardinals, bishops and priests are emerging as some of the most influential opponents of immigration crackdowns backed by right-wing populists in the United States and Europe. The moves come as Francis, who has put migrants at the top of his agenda, appears to be leading by example, emphasizing his support for their rights in sermons, speeches and deeds. The pro-migrant drive risks dividing Catholics — many of whom in the United States voted for Trump." He has also been criticized by some prominent clerics for "more open stance on divorced Catholics and gays and lesbians".[4]

There have also been many other criticisms from conservative Catholics.

The Black cardinal Peter Turkson from Ghana is predicted by many to be the successor to Francis.[5]