From Metapedia
(Redirected from Anti-German sentiment)
Jump to: navigation, search 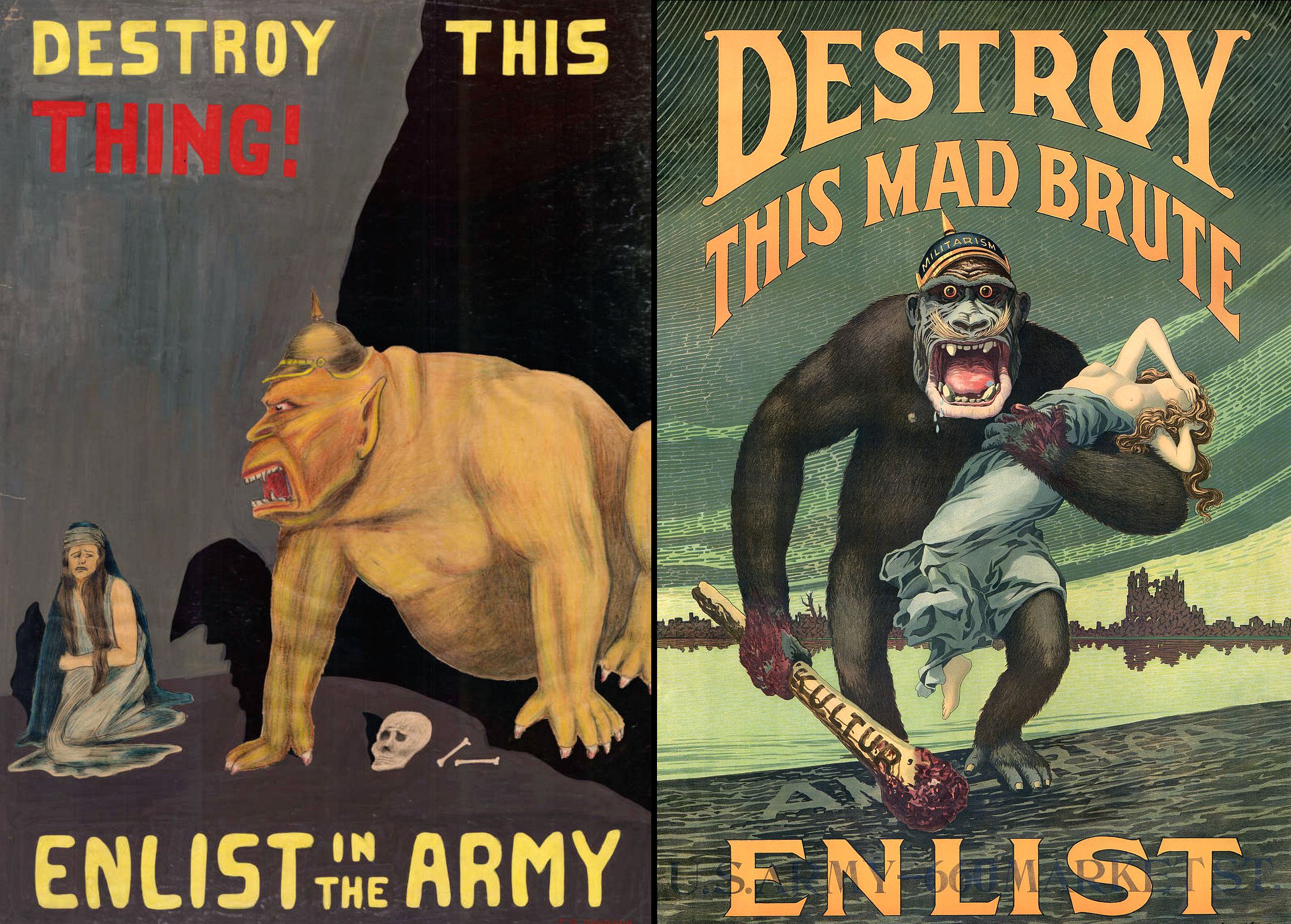 Anti-German or anti-Germanic (also Germanophobia and Teutonophobia / Teutophobia) is defined as a feeling or sentiment of opposition to, hostility towards or fear of Germany, including its inhabitants, its culture, it's policies, it's prosperity and the German language, practically the hate of Deutschtum or everything German (German: Deutschfeindlichkeit). It's antonym is "Germanophilia". 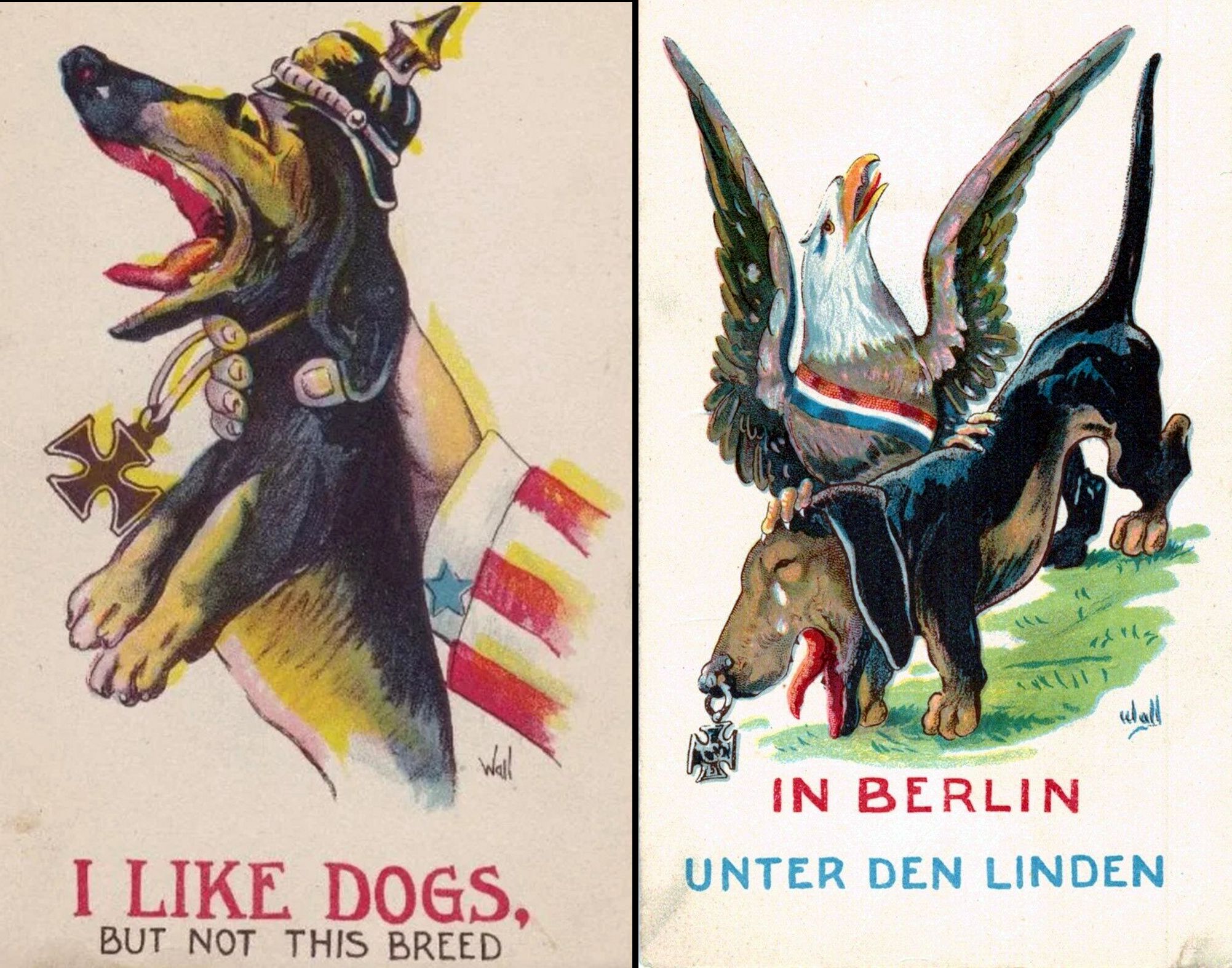 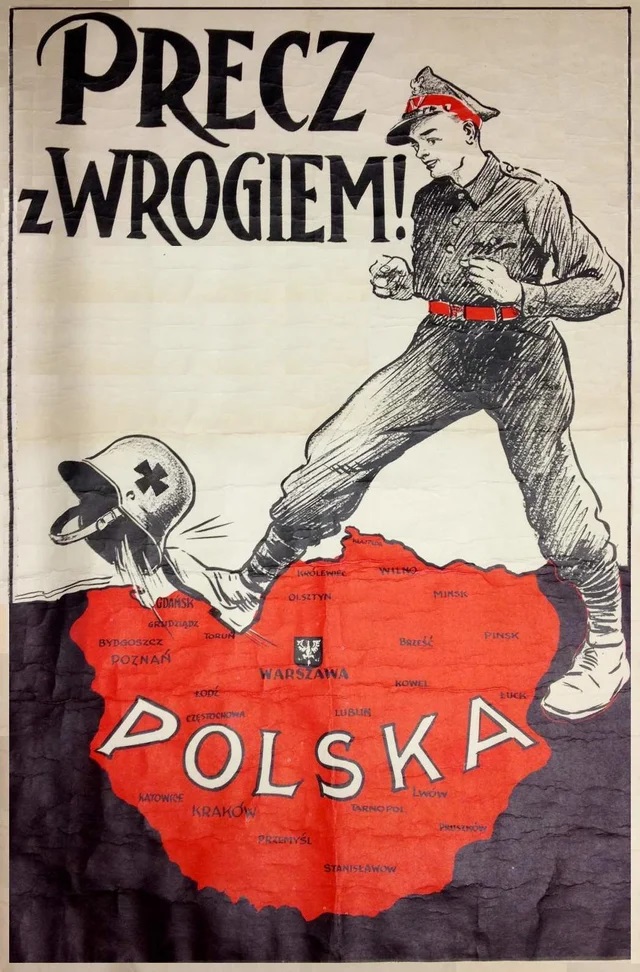 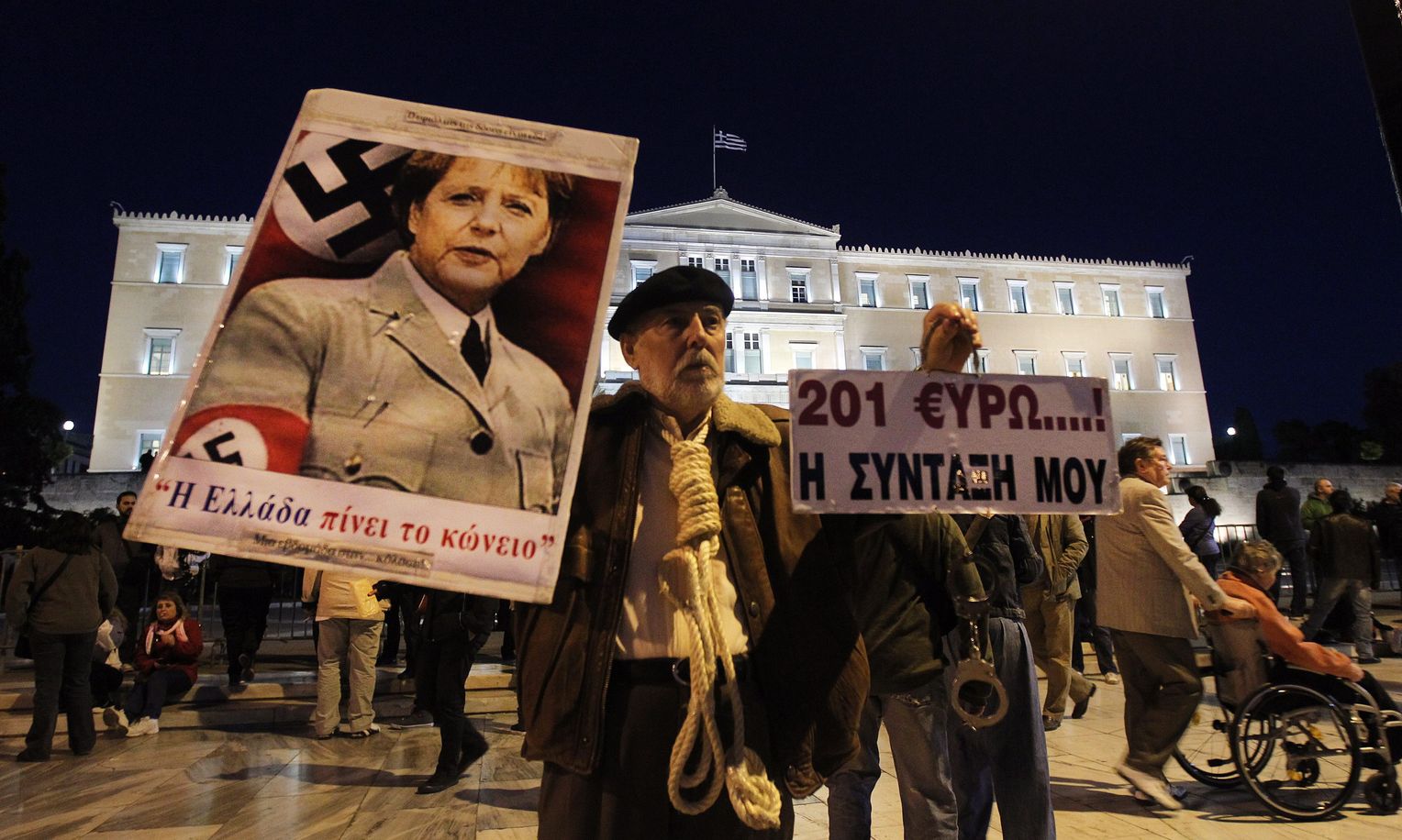 Anti-Germanic sentiment was fueled by Italian Renaissance scholars, naming the Middle Ages after the Fall of Rome (Eroberung Roms) "Dark Ages", although many kinds of European technologies had surpassed that of Ancient Rome and at least Eastern and Northern Europe (Germania) had become far more developed regions than these regions had been at the time of the falsely glorified Roman Empire.

The first known use of the term "anti-German" was in 1846 concerning isolated hostile criticism against wealthy German American businessmen, later again in the Confederate States of America during the American Civil War, because most Germans served in the Union Army instead of the Confederate States Army. But also Britain, the island nation, feared a "German invasion" after the Franco-Prussian War, leading to the popularity of the invasion novel. Some Germanophobic feelings, fueled by the bolshevists, developed in Russia due to the Imperial family's German roots (House of Holstein-Gottorp-Romanov) and the presence of many German names in the Russian academic, political and military elite.

By 1910, Germans were the largest non-English speaking immigrant group in the USA, with the first wave of migrants arriving in Pennsylvania, New York, and Maryland during colonial times. According to the 1910 census, it was estimated that one in every eleven Americans was first or second-generation German. German was the most commonly studied foreign language and was considered, by many, a lingua franca of the literary scene, of the entertainment scene, and of the theater. Certain cities, such as Cleveland, Cincinnati, Baltimore, St. Louis, and Chicago, had German-language schools, German-language newspapers, and even clubs where German-Americans could enjoy their own company while drinking German-style lager. German Catholic and Lutheran churches often operated as schools, teaching their German-American students in German.[1]

World War I and II

In World War I, Germany was considered the main culprit and provacateur of the war. Therefore, it stirred the movement against Germans in United States. Prior to the war, German-Americans were able to express and promote their ethnic culture through the fine arts and language. Once the war began, German-Americans came under public scrutiny and ostracism. To raise support for the war, German culture was belittled to establish the notion of superiority of America. Any traces of German culture was erased in America. For example, instead of saying “hamburger,” which has German roots, it was called “liberty sandwich.”[2] Dr. Katja Wüstenbecker, lecturer in North American History at the University of Jena, states in Deutsch-Amerikaner im Ersten Weltkrieg. US-Politik und nationale Identitäten im Mittleren Westen:

“Citizens of German descent were dragged out of their homes at night and forced to kiss the flag or sing the national anthem. The most notorious case of mob action was the lynching of Robert Prager in Illinois in April 1918. Prager, a German native who had applied for American citizenship, was known to harbor socialist ideas and was suspected by his neighbors of stealing dynamite. Although this could not be proven, he was dragged out of town, stripped, and hanged. This lynching caused outrage among many prominent Americans; nevertheless, court proceedings found the members of the mob not guilty.”

While all these aspects of anti-German sentiment were fueled by Germany’s presence in World War I, that fuel was ignited by the anti-German propaganda ubiquitous amongst posters, pamphlets, articles, and books. In much of this propaganda, the Germans were referred to as the Huns, after the hordes of Asian warriors who had ravaged the Roman Empire, insinuating they were doing the same to Europe now. According to the organizers of an the exhibition “Home Front, War Front: Sewanee and Fort Oglethorpe in World War I: Anti-German Sentiment,” many media outlets labeled German-Americans as “a threat to European civilization and the American values of peace, democracy, and liberty” and portrayed them as “aggressive, materialistic, savage and uncivilized.”

The coming of World War I brought with it a backlash against German culture in the United States. When the U.S. declared war on Germany in 1917, anti-German sentiment rose across the nation, and German American institutions came under attack. Some discrimination was hateful, but cosmetic: The names of schools, foods, streets, and towns, were often changed, and music written by Wagner and Mendelssohn was removed from concert programs and even weddings. Physical attacks, though rare, were more violent: German American businesses and homes were vandalized, and German Americans accused of being "pro-German" were tarred and feathered, and, in at least once instance, lynched. The most pervasive damage was done, however, to German language and education. German-language newspapers were either run out of business or chose to quietly close their doors. German-language books were burned, and Americans who spoke German were threatened with violence or boycotts. German-language classes, until then a common part of the public-school curriculum, were discontinued and, in many areas, outlawed entirely. None of these institutions ever fully recovered, and the centuries-old tradition of German language and literature in the United States was pushed to the margins of national life, and in many places effectively ended. President Woodrow Wilson spoke disapprovingly of "hyphenated Americans" whose loyalty he claimed was divided. One government official warned that "Every citizen must declare himself American--or traitor." Many German Americans struggled with their feelings, realizing that sympathy for their homeland appeared to conflict with loyalty to the U.S. [...] Anti-German feelings arose again during World War II, but they were not as powerful as they had been during the first World War. The loyalty of German Americans was not questioned as virulently. Dwight Eisenhower, a descendant of the Pennsylvania Dutch and future president of the United States, commanded U.S. troops in Europe. Two other German Americans, Admiral Chester Nimitz of the United States Navy and General Carl Spaatz of the Army Air Corps, were by Eisenhower's side and played key roles in the struggle against Nazi Germany. World War II, industrial expansion, and Americanization efforts reinforced the cultural assimilation of many German Americans. After the war, one more surge of German immigrants arrived in the United States, as survivors of the conflict sought to escape its grim aftermath. These new arrivals were extremely diverse in their political viewpoints, their financial status, and their religious beliefs, and settled throughout the U.S. German immigration to the United States (de) continues to this day, though at a slower pace than in the past, carrying on a tradition of cultural enrichment over 400 years old—a tradition that has helped shape much of what we today consider to be quintessentially American.[3]

After Brazil's entry into the war on the Allied side in 1942, anti-German riots broke out in nearly every city in Brazil in which German Brazilians were not the majority population. German factories, including the Suerdieck cigar factory in Bahia, shops, and hotels were destroyed by mobs. The largest demonstrations took place in Porto Alegre in Rio Grande do Sul. Brazilian police persecuted and interned "subjects of the Axis powers" in internment camps similar to those used by the US to intern Japanese-Americans. Following the war, German schools were not reopened, the German-language press disappeared completely, and use of the German language became restricted to the home and the older generation of immigrants.

According to Alfred Vagts, the novelia "The Battle of Dorking":

Newspaper publisher Lord Alfred Harmsworth, 1st Viscount Northcliffe in 1894 commissioned author William Le Queux to write the serial novel The Great War in England in 1897, which featured France and Russia combining forces to crush Britain. Happily German intervention on Britain's side turned back France and Russia. Twelve years later, however, Harmsworth asked him to reverse enemies, making Germany the villain. The result was the bestselling The Invasion of 1910, which originally appeared in serial form in the Daily Mail in 1906. Harmsworth now used his newspapers like "Daily Mail" or "The Times" to attack Berlin, inducing an atmosphere of paranoia, mass hysteria and Germanophobia that would climax in the Naval Scare of 1908–09.[4][5]