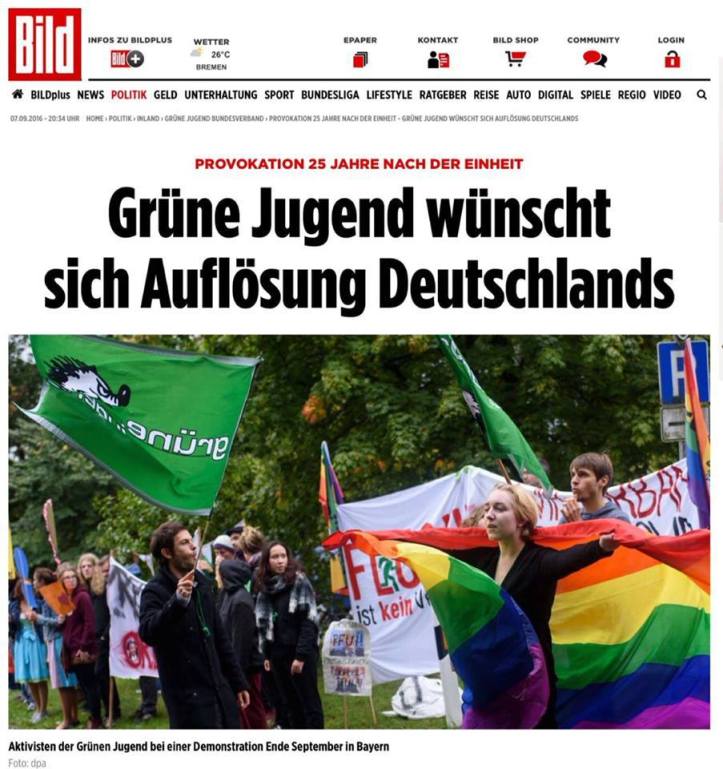 Antideutsche (German: anti-Germans) is the name of an ethnomasochist, leftist ideology and movement in Germany. The Hebrew-language Wikipedia terms the anti-German crusade an “anti-nationalist communist movement.”

Antideutsche leftist demonstrators honours Israel at a protest demonstration against the yearly memorial (de) of the Allied Bombing of Dresden. 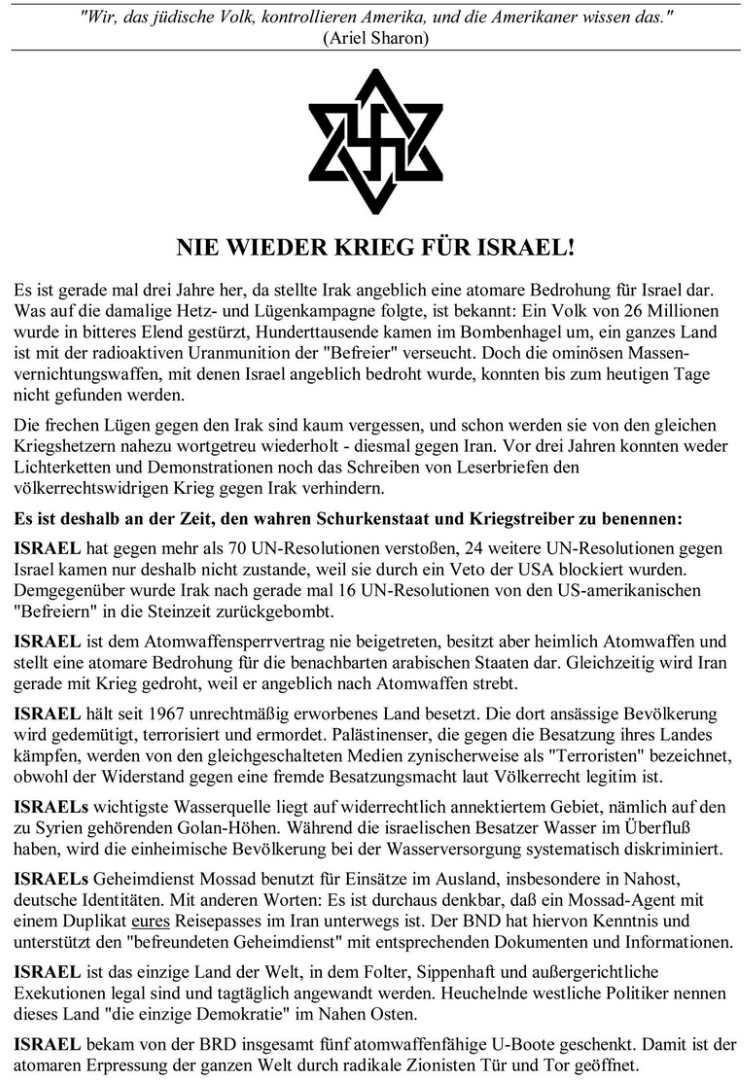 The ideology includes a now unusual communist analysis, arguing that societies must became advanced capitalist before the communist revolution can occur. This has caused support for views unusual for leftists, such as support for the United States when attempting to implement capitalist liberal democracies by regime changes and wars. Fascism, nationalism, traditionalism, and Islamism are viewed as related to feudalism, less advanced and more undesirable than advanced capitalism.

Israel is viewed by some as an ally, but by others as an enemy, considering the State of Palestine the victim of Jewish aggression. Leftist Wikipedia focuses on this and tries to downplay the ethnomasochist aspect, claiming that "support for Israel and opposition to Anti-Zionism is a primary unifying factor of the anti-German movement".

Who Stands Behind the "Antideutsche"?

In connection with German "reunification", there crawled out from the always-fertile womb of German-Hatred a specter that the dearly-departed Ilja Ehrenburg and his cronies will forever broadcast from the depths of the underworld: The demand for the physical extermination of the German people. This call does not only emanate from the throats of the so-called "Antifa", and the subset who call themselves "Antideutsche". Margarete Mitscherlich, in a fit of reeducation-based-rage, published the following words in the newspaper BILD on the 17th of December 1986, in total earnestness: "That the Germans die-out can really not be lamented. German-speaking 'Gastarbeiter' could bring us their cultural enrichment."

What is especially curious about this renaissance of the Genocide-Idea? The fact that genocide-agitation against the German nation is considered acceptable by the German Federal Justice System, under Article 5 -- Freedom of Speech. On the 13th of February 2005 -- and in subsequent years as well -- during the commemoration march held by German patriots on the anniversary of the firebombing-holocaust of Dresden in 1945, something odd happened. German city and state officials united with far-left rabble, atop the "Brühlschen Terrace" in downtown Dresden, beneath a giant banner with the slogan: "Alles Gute kommt von oben!" [All good things come from above]. The banner was draped with two Israeli flags. The background of the banner was blue, while the words were in white.

Genocide-Agitation Against Germans -- Not Punishable

And in 2003, on the occasion of the ringing of the bells of the Frauenkirche [Dresden's largest church -- destroyed Feb. 13, 1945 -- Rebuilt 1996-2005] for the first time in nearly 60 years, the "Antideutsche" were there, pelting passing streetcars with stones. For some time now, banners have surfaced at Antifa-demonstrations with slogans like "Bomber-Harris, Do It Again!", or "Bomber-Harris und die Flut tun allen Deutschen gut!" Definite calls for the genocide of the German nation. In Munich on the 13th of February 2004, "68er"-ethnomasochists came before the City Hall to glorify the mass-murder of the hundreds of thousands of Germans who perished in the Dresden firestorm. Among other slogans, the genocide-agitators chanted: "Bomber-Harris, kill German women and children again!" A chief-prosecutor in Munich, Mr. Stern, suspended the "Volksverhetzung" [popular incitement] law in their case. A local citizen, Reinhard Heuschneider, had complained. Stern replied:

In regards to the incident of 13th Feb. 2004, the commemorative function on the 59th anniversary of the bombing of Dresden, held in Munich on the Marktplatz, from 17:20 through 18:10: A four-meter-long and two-meter-high banner with "Bomber-Harris, Do It Again" written on it, held up and made visible by various demonstrators, is alleged to violate sections 111, 130a, 140, and 189 of the criminal code. None of these allegations are valid. This is covered under Freedom-of-Expression, Article 5 of the Constitution. Signed, STERN, Chief-Prosecutor.

The government of Dresden has likewise refused to make any effort at any kind of prosecution at all. Possible penalties -- "Volksverhetzung", incitement to violence, defamation of the memory of the dead, or insulting the collective-memory -- have not been pursued.

Thus we are left with the question: Which interest-group is behind these so-called "Antideustche" (and their enablers in the judicial system)? Who guides them and who finances them? A highly-revealing answer to this question comes from the civil-rights group BÜSO, of American populist-economist Lyndon LaRouche. A report from said group is dated 18th March 2007, with the title "The Origins of the Antideutsche". In this report, the ties that exist between a certain group of wealthy capitalists who have an aggrieved feeling against Germany and the Antideutsche are discussed. BÜSO reveals:

A British-financed sect is on a crusade against Germany. After the Fall of the Berlin Wall, it has built-up the so-called "Antideutsche". The Antideustche attack as "anti-Semites" the opponents of American and Israeli war-policy, and they attack opponents of the organized-theft known as "hedge-funds". A team from the LaRouche youth movement of Germany found out some interesting things about them. In the winter of 1989-90, as the entire world celebrated the fall of the Wall, the liberation of the German Democratic Republic, and the imminent dissolution of the Soviet Union, a number of idiotic slogans began to be seen regularly at German left-wing demonstrations. The demonstrators holding such banners belonged to the violently left-wing "Autonomous scene" of Germany. Their banners bore slogans such as "Fourth Reich -- Never Again" and "Bomber-Harris -- Do It Again."

BÜSO revealed that this violent hatred against Germans, which characterizes this extreme wing of "Antifa", has connections to former rhetoric and policies of elements within the former Margaret Thatcher Tory government and several leading members of the "City of London" financial elite. The well-researched article claims that this worldwide anti-German front is led by those connected with Anglo-Dutch banking interests, with close ties to the British royalty. According to BÜSO, these interest-groups feared a declining supremacy after the unification of the two parts of Germany:

On 31st October 1989, Connor Cruise O'Brian penned an hysterical attack on the notion of a possible future reunited Germany. In an article in the London Times, he hissed:

"We are moving towards a Fourth Reich, a pan-Germanic unity which all German nationalists command. [...] Nationalistic intellectuals will declare that the true Germany bears no guilt for the Holocaust, but rather pride in itself, and that a great, courageous, and healing course of action should be taken. I fear that the Fourth Reich, if it comes, will have the natural proclivity to resemble its predecessor."

Fear of the "Fourth Reich":

On the 12th of November 1989, a few days after the fall of the Berlin Wall, the Sunday Times opened with the same theme: Its lead article was titled "The Fourth Reich". The mouthpiece of the Anglo liberal establishment wrote in apocalyptic language: "The result of German reunification will be a German economy that is twice as large as any other. A united Germany will then be the driving-force of the restructuring of Eastern-Europe on a free-market basis: Germany will use its capital, its industrial know-how, and its management-expertise, which those countries will need. The Fourth Reich will boom, and in these way will become Europe's super-power. Where, then, will Great-Britain be?" From July 1990, the British government under Margaret Thatcher officially took up the cause of opposing German reunification. On the 12th of July, Trade and Industry Minister Nicholas Ridley gave a provocative interview to the Spectator. On the same page, the paper printed a cartoon of Chancellor Kohl with a Hitler-mustache. Ridley boasted in the interview that Great-Britain would always control the balance of power in Europe. He said it had always been Britain's role to play the various countries of Europe against one another, and that this had never been as needed as it was right then, after Germany had reunited. On behalf of these interests in the German Federal Republic, the "Antideutsche" network was organized. BÜSO writes further:

The ongoing parallels between the emergence of the "Antideutsche" and the politics of the Anglo banking oligarchy to this day are hardly a coincidence. Investigations by the Executive Intelligence Review (EIR) and the LaRouche-Youth-movement have discovered that there is a concentrated power-apparatus in London, with close ties to the transatlantic neoconservative movement, that exerts control over the ideology of the Antideutsche. Behind the Antideutsche thug-troop and the international network of think-tanks, intellectuals, and political string-pullers that finances the Antideutsche's operations, there is a larger goal -- to exterminate the true Germany, in the tradition of the German classics, the Germany of Moses Mendelsohn, Gotthold Ephraim Lessing, Friedrich Schiller, Friedrich List, Johann Wolfgang von Goethe, Johann Sebastian Bach, and Ludwig von Beethoven. Something rings a bell here.

In summary: The idiotic "Antideutsche", along with the Federal-German Justice system -- both at the very least partially guided by a supranational establishment -- feels the very existence of Germany is a thorn in its side. It is good to know.