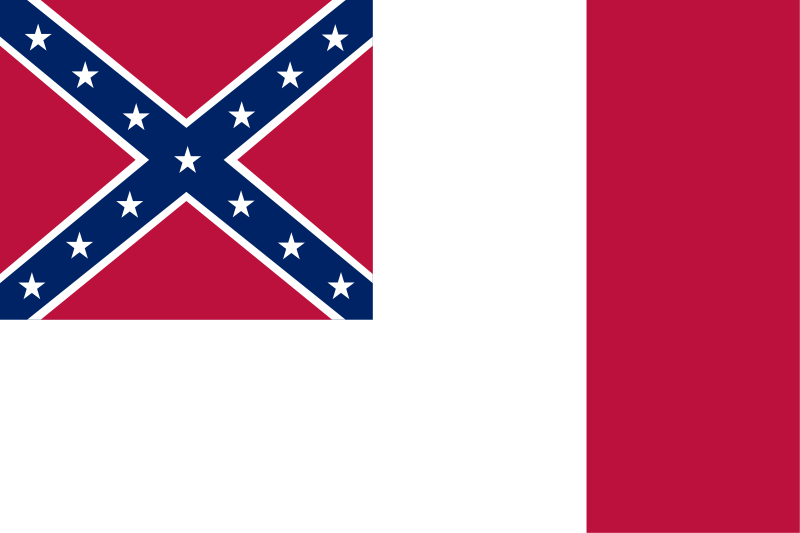 Flag of the Confederate States of America; Seven states declared their independence from the United States before Abraham Lincoln was inaugurated as President; four more did so after the American Civil War began. The United States of America ("The Union") held secession illegal and refused recognition of the Confederacy. Although no European powers officially recognized the Confederacy, British commercial interests sold it warships and operated blockade runners to help supply it. When Robert E. Lee and other Confederate generals surrendered their armies in the spring of 1865, the Confederacy collapsed, ending the war without subsequent guerrilla warfare. A decade-long process euphemistically known as Reconstruction followed.

Following the American Revolution the former colonies became self-governing States in a new Federation of the United States of America, a Union of States. These States retained clearly defined rights and full legislatures. Judge Upsher, writing in The Federal Government: Its True Nature and Character, said "the name of our federation is not Consolidated States, but United States. Union is necessarily voluntary, the act of choice, free association. A Union of States necessarily implies separate sovereignties, voluntarily acting together". The Federal Government was to have limited powers. States' Rights were reinforced with the famous Hartford Convention of 15 December 1814. The principal resolution adopted there included the declarations that

"it is not only the right but the duty of each State to interpose its authority for their protection in the manner best calculated to secure that end [...] they [the States] must be their own judges and execute their own decisions".[1]

In 1820, Missouri applied to join the Union. The men of the northern States applied restrictive conditions to their entry, conditions which other southern states already enjoyed. A similar argument erupted in 1850 over the admission of territories won during the Mexican wars and this time South Carolina declared the conditions as breaching States' Rights and that they would resist any further aggression against their rights, even if it meant the rupture of the Union. When President Andrew Jackson (1829 to 1837) had said that the Federal Union must be preserved there was an outcry - he was represented in some states as a coercionist - and he subsequently reneged and declared that the Union could not be preserved by force.[2]

Throughout the 19th century the southern states were at odds with the Federal Government over States' Rights. High Federal tariffs, for instance, were harmful to southern commerce. In 1860 had the south been an independent nation, her economy would have ranked as the third-largest on the European and American continents. During that decade in particular arose the issue of taxation. The various southern states felt that the Federal Government was receiving huge revenues from them, the bulk of which the south never saw again. These arguments were dismissed by Congressmen from the northern states, who were in the majority.[3] The southern economy also relied heavily on slave labour and slaves made up a large percentage of the south's population (anywhere from 30–57 %, depending on the state). At this point in time slavery w as widespread in the Americas including Cuba and Brazil.[4]

On 11 January 1860, the Democrats in Alabama moved. They met in a convention in Montgomery and adopted as series of resolutions presenting a summary Declaration of States' Rights. Importantly they resolved "that the Constitution of the U.S.A. is a compact between sovereign and co-equal states, united upon the basis of perfect equality of rights and privileges." Delegates were selected at this meeting to go to the States' Rights Democratic Party Convention in Charleston, South Carolina, on the 23 April 1860, armed with the approved resolutions. At this important Convention delegates from other southern states arrived with instructions equally binding. One of the resolutions submitted by the majority of the Committee on resolutions stated:

"That when a territory has an adequate population and forms a State Constitution, the right of sovereignty commences, and, being consummated by admission to the Union, they stand on an equal footing with the people of other states."

The Convention refused to accept that the Federal Supreme Court of the United States could make pronouncements on constitutional law. Because of discord with those delegates from the northern states, the Convention adjourned and reconvened in the northern city of Baltimore on June 18th. Here a clear breach opened between the northern and southern states' delegates. The final straw was the election of Abraham Lincoln as President in 1860. He gained only 1,858,200 votes. The combined opponents' votes came to 2,824,874.[5] Secessions followed. In less than three months after Lincoln's election the Union was split.

Under the 10th Amendment to the United States Constitution, a state seceding from the union is legal providing a majority of its legislature voted for it. The Amendment states that all powers not prohibited to the states by the Constitution are reserved to the states or the people, and there is nothing in the Constitution which prohibits states from leaving the union. The USA Federal Government, however, refused to recognize the legitimacy of the secessions.

These seven states held a Convention of Confederate States on 4 February 1861 forming a provisional government. Its Constitution was adopted four days later. The conflict over Fort Sumter prompted other states to consider their positions. Further secessions followed, joining the CSA:

Despite the continuing efforts of the CSA to enter into negotiations with the Union, the federal authorities made unremitting preparations for war from the moment of Lincoln's election, the result of which was the striking number of resignations from the Federal army and navy on the part of officers of southern birth or association. The flashpoint was to become the then incomplete Fort Sumter in Charleston harbour. The Federal Government broke its word to the Governor of South Carolina, which had already seceeded, and on April 12th moved Federal troops into Fort Sumter. In attempting even more reinforcements of it by sea, the latter were repulsed by the city's batteries. These troops had no legal right to be within the territory of the CSA against its will. The North now declared war on the Confederate States of America,[6] thus beginning the American Civil War.

This is why the war is known in the South as "The War of Northern Aggression". What ensued was the bloodiest war in American history (about 620,000 died). In 1865, the Confederacy lost the war and was dissolved.

President of the Confederate States of America