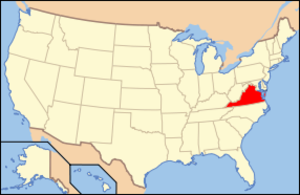 Virginia, officially the Commonwealth of Virginia, is a state in the Mid-Atlantic and Southeastern regions of the United States, between the Atlantic Coast and the Appalachian Mountains. It is named after Queen Elizabeth I of England, who was known as the Virgin Queen because she never married.

The Virginia Colony was the first part of the Americas to be continuously inhabited by English (following the 1707 Acts of Union, British) colonists from its founding as a European colony up to the American Revolution. It included area explored by the 1584 expedition of Walter Raleigh along the coast of North America, and at one time it also included Bermuda (or Virgineola). The Virginia Company of London became incorporated as a joint stock company by a proprietary charter drawn up on April 10, 1606. The charter granted lands stretching from approximately the 34th parallel (North Carolina) north to approximately the 45th parallel (New York) and from the Atlantic Ocean westward. The Third Charter of 1612 extended its boundaries far enough across the Atlantic to incorporate Bermuda, which the company had possessed since 1609. The commonwealth was one of the thirteen colonies that revolted against British rule in the American Revolution to form the United States of America. The first Germans arrived at Jamestown in (James Fort) in October 1608.

Virginia is known as the "Mother of Presidents", because it is the birthplace of eight U.S. presidents (George Washington, Thomas Jefferson, James Madison, James Monroe, William Henry Harrison, John Tyler, Zachary Taylor, and Woodrow Wilson), more than any other state. Most of the United States' early presidents were from the state. Virginia has also been known as the "Mother of States" (sometimes "Mother of States and Statesmen") because portions of the original Colony subsequently became Kentucky, Indiana, Illinois, as well as some portions of Ohio. Additionally, most of what is now Wisconsin and Michigan was also briefly claimed by Virginia during the Revolutionary War. As a result of the American Civil War (1861-1865), many western counties formed a separate state which was admitted to the Union as West Virginia.

Virginia has a diverse economy, with many federal and military employees in Northern Virginia and Hampton Roads, which have the world's largest office building and the world's largest naval base respectively. In modern times, the Historic Triangle of Colonial Virginia area includes Jamestown, Yorktown and the restored area and living museum of Colonial Williamsburg. Linked by the Colonial Parkway, they combine to form one of the most popular tourist destinations in the world.