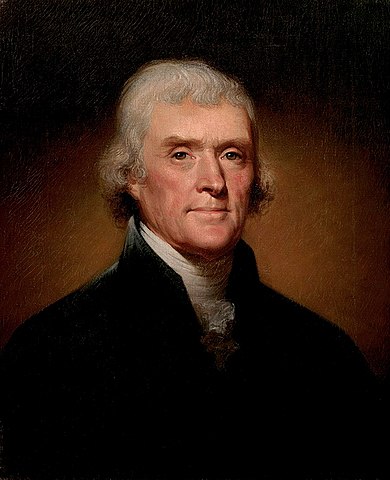 Thomas Jefferson (13 April 1743 – 4 July 1826) was the third President of the United States (1801–1809), the principal author of the Declaration of Independence (1776), and one of the most influential Founding Fathers for his promotion of the ideals of Republicanism in the United States. Major events during his presidency include the Louisiana Purchase (1803) and the Lewis and Clark Expedition (1804–1806).

As a political philosopher, Jefferson was a man of the Enlightenment and knew many intellectual leaders in Britain and France. He idealized the independent yeoman farmer as exemplar of the republican virtue, distrusted cities and financiers, and favored states' rights and a strictly limited federal government. Jefferson supported the separation of church and state and was the author of the Virginia Statute for Religious Freedom (1779, 1786). He was the eponym of Jeffersonian democracy and the co-founder and leader of the Democratic-Republican Party, which dominated American politics for a quarter-century and was the precursor of the modern-day Democratic Party. Jefferson served as Governor of Virginia during the American Revolution (1779–1781), and became first United States Secretary of State (1789–1793) and second Vice-President (1797–1801).

A polymath, Jefferson achieved distinction as an horticulturist, statesman, architect, archaeologist, paleontologist, author, inventor, and the founder of the University of Virginia, among other roles. When President John F. Kennedy welcomed forty-nine Nobel Prize winners to the White House in 1962 he said.

"I think this is the most extraordinary collection of talent and of human knowledge that has ever been gathered together at the White House—with the possible exception of when Thomas Jefferson dined alone."

Long regarded as a leading spokesman for the ideas of the Enlightenment, he has been increasingly criticized for his ownership of a large numbers of slaves and for allegedly being the father of children with his slave, Sally Hemings.