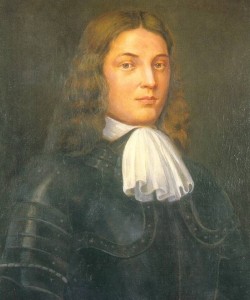 Penn in armour before becoming a pacifist.

William Penn (14 October 1644 - 30 July 1718) was an English Quaker leader and supporter of religious freedom, who oversaw the founding of Pennsylvania as a refuge for Quakers and other religious minorities of Europe.

As one of the earlier supporters of colonial unification, Penn wrote and urged for a union of all the English colonies. The democratic principles that he set forth in the Pennsylvania Frame of Government served as one inspiration for the United States Constitution.

Less politically correct aspects include that he did not think that the colonists should have full powers, seeing himself as having a key role in running the colony, which should become a profitable enterprise, to be inherited by his own family.[1] The rights he allowed were restricted, for example prohibiting stage plays and mosques.[2]