From Metapedia
(Redirected from Dwight Eisenhower)
Jump to: navigation, search 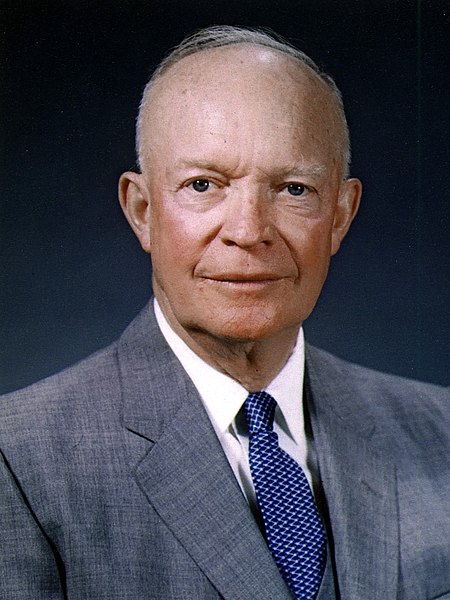 Eisenhower has been argued to have had partial Jewish ancestry, which would explain some of his views and actions.[1][2]

Others have argued that the evidence mostly supports that Eisenhower did not have Jewish ancestry.[3][4]

The reasons for Eisenhower's actions have instead been argued to be a Christian Zionist upbringing and a long-term relationship with the powerful Jewish Zionist Bernard Baruch. Baruch is stated to have used his power to elevate Eisenhower to the position of Supreme Allied Commander in Europe over many better qualified men.[3]

"Eisenhower hated Germans, he told his wife Mamie in a letter in September 1944. Why? "Because the German is a beast." In front of the British ambassador to Washington, in August, he said that all the 3,500 or so officers of the German General Staff should be "exterminated." He would include for liquidation all leaders of the Nazi party from mayors on up, plus all members of the Gestapo. This would total about 100,000 people."[5]

During World War II, he was Supreme Commander of the Allied forces in (Western) Europe. After the war, he was military governor in occupied Germany. He has been accused of having a responsibility for the mass deaths of German POWs and civilians, during and after the war. See Rheinwiesenlager and Claimed mass killings of Germans by the WWII Allies.

The Jewish Secretary of the Treasury Henry Morgenthau, Jr. claimed that it was actually Eisenhower who instilled in him the idea of extremely harsh postwar treatment of Germans, the Morgenthau Plan, although Eisenhower would later deny this, or plead loss of memory.[6] In November 1945, when Eisenhower was the Military Governor of the U.S. Occupation Zone, he approved the distribution of 1000 free copies of a book by Morgenthau on the plan to American military officials in occupied Germany. Historian Stephen Ambrose draws the conclusion that, despite Eisenhower's later claims that the act was not an endorsement of the Morgenthau plan, Eisenhower both approved of the plan and had previously given Morgenthau at least some of his ideas on how Germany should be treated.[7]

Eisenhower has also been argued to have had a responsibility for the mass deaths of non-German and German prisoners in the Western Holocaust camps at the end of the war. As such, he would have had a strong personal self-interest in blaming such deaths on the Germans.

As Supreme Commander and Military Governor, he would also have had a responsibility for the Allied psychological warfare and Holocaust propaganda that has been argued to have been fabricated by, for example, Allied "Psychological Warfare" units in the Western Holocaust camps. See the article on these camps. 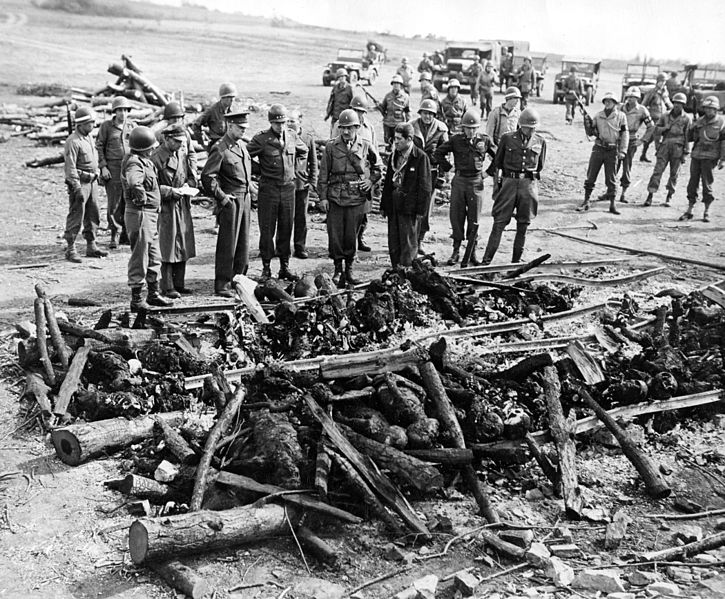 See Western Holocaust camps: Buchenwald on statements made by Eisenhower on visiting Buchenwald and organizing pro-Allied propaganda involving the camp.

The three Allied leaders Eisenhower, Churchill, and de Gaulle wrote very extensive works describing their memories of World War II. "In this mass of writing, which altogether totals 7,061 pages (not including the introductory parts), published from 1948 to 1959, one will find no mention either of Nazi "gas chambers," a "genocide" of the Jews, or of "six million" Jewish victims of the war."[8]

General George S. Patton died in December 1945 (at the start of the International Military Tribunal), allegedly after having suffered injuries in an accidental car crash. A 2008 book presented detailed evidence for that Patton had been killed in order to silence him. One example of this evidence is a confession by the argued assassin. The author argued that Eisenhower would not have become president if Patton had lived to say the things he wanted to say.[9][10][11]

The Eisenhower administration participated in coups in 1953 and 1954, which overthrew elected governments in Iran and Guatemala. In Iran, the pro-Israel Shah Mohammad Reza Pahlavi became an autocratic ruler. In Guatemala, the coup has been argued to be one factor leading to the long Guatemalan Civil War. The coups have also been seen as contributing to long-lasting resentment against the United States in Iran and Latin America.

Part of this article consists of modified text from Wikipedia, and the article is therefore licensed under GFDL.
Retrieved from "http://en.metapedia.org/m/index.php?title=Dwight_D._Eisenhower&oldid=468454"
Categories: