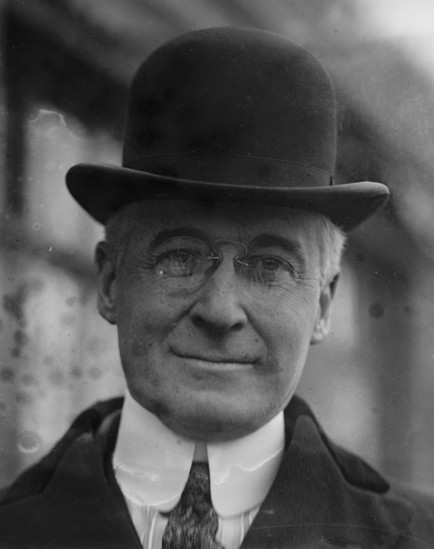 Bernard Baruch (1870 - 1965) was a wealthy Jewish stock market speculator who became very influential, in part by financial contributions to politicians. He advised several US presidents and others, notably US President Woodrow Wilson during the First World War and US President Franklin D. Roosevelt and UK Prime Minister Winston Churchill during the Second World War.

During the First World War, Baruch came to control the War Industries Board (WIB), which had extraordinary wartime powers. Baruch himself stated that "I probably had more power than perhaps any other man did in the war; doubtless that is true."[1] There have been various accusations of Baruch using his position for war profiteering, with some claims stating that he personally gained tens of billions of dollars in today's terms, adjusted for inflation.[2]

After the First World War, Baruch advised Wilson on the Versailles Treaty and drafted the harshly punitive economic clauses.[3] After the Second World War, he supported the harsh Morgenthau Plan, threatening to the end the careers of those in Washington who stood in the way.[4]

"As Sherwood (1948: 111) recounts, Churchill—then still First Lord of the Admiralty—said this to Baruch: “War is coming very soon. We will be in it and you (the United States) will be in it. You (Baruch) will be running the show over there, but I will be on the sidelines over here."[5]