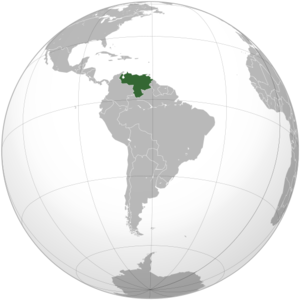 Venezuela is a country in South America.

A less mentioned aspect is race, such as the former leftist president Hugo Chávez and his leftist successor Nicolás Maduro being supported by "darker" Venezuelans and opposed by "whiter" Venezuelans. Despite having the world's largest known oil reserves, the country has had enormous economic problems, in large part due to the leftist policies, causing millions of people to migrate to other countries.

Hugo Chávez stated in an interview that “Hate against me has a lot to do with racism. Because of my big mouth, because of my curly hair. And I’m so proud to have this mouth and this hair, because it’s African."[1]