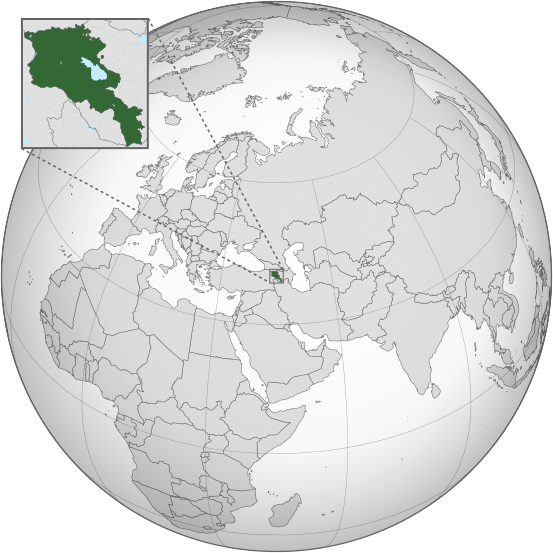 Armenia, officially the Republic of Armenia, is a country. Oficially Western Asian, whether it is an Asian and/or European country is sometimes controversial. Geographically it lies south of the watershed of the Greater Caucasus mountain range, the traditional boundary of Europe. The modern Republic of Armenia is constitutionally a secular state, although the Christian faith plays a major role in the history and identification of the Armenian people. 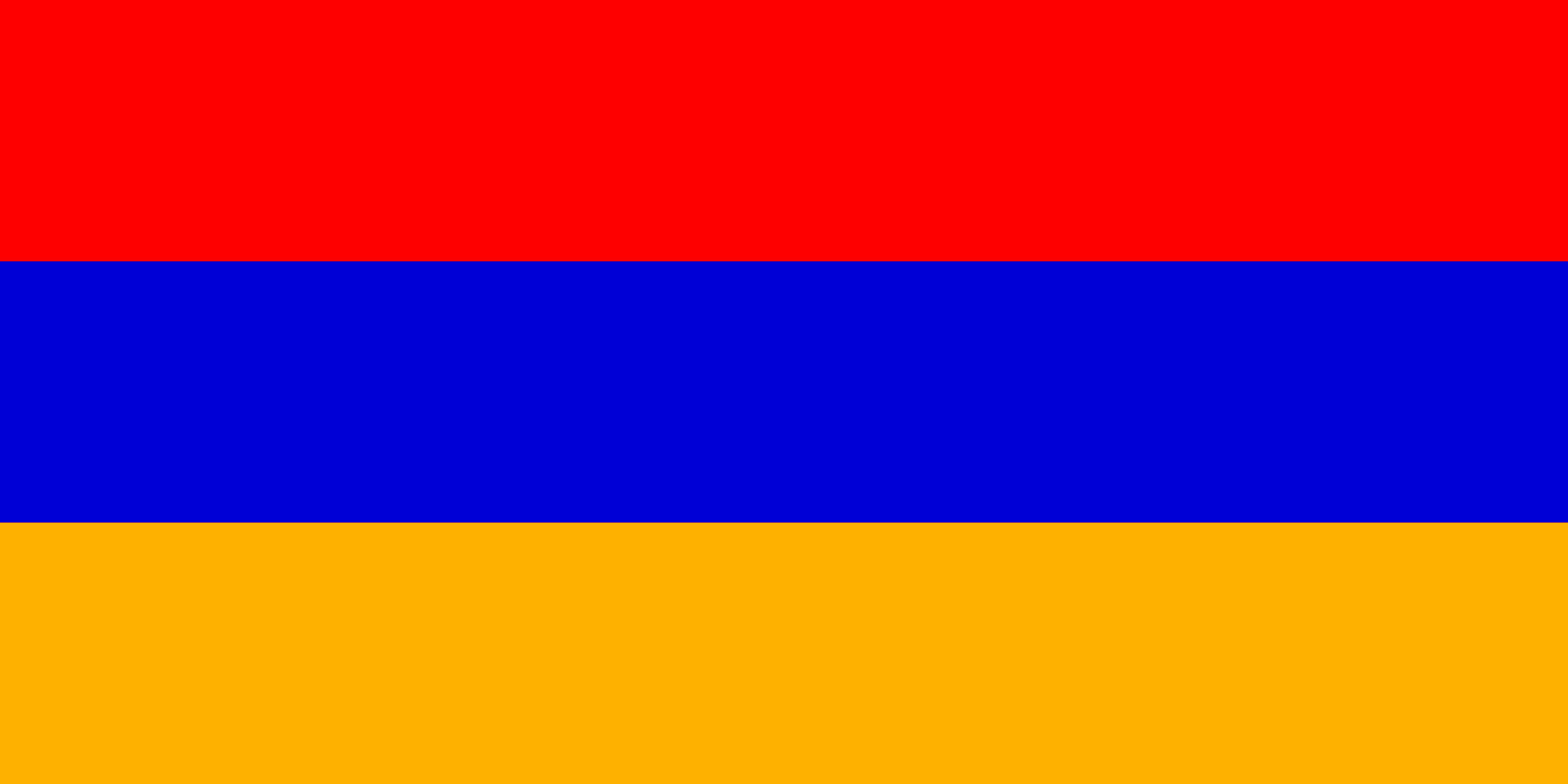 Armenia is a landlocked mountainous country in Eurasia between the Black Sea and the Caspian Sea in the Southern Caucasus. It borders Turkey to the west, Georgia to the north, Azerbaijan to the east, and Iran and the Nakhchivan exclave of Azerbaijan to the south. A transcontinental country at the juncture of Eastern Europe and Western Asia, Armenia has had and continues to have extensive socio-political and cultural connections with Europe. Armenia claim the territory of Nagorno-Karabakh Republic, a de facto independent country recognized only by Abkhazia, South Ossetia, and Transnistria.

A former republic of the Soviet Union, Armenia is a unitary, multiparty, democratic nation-state with an ancient and historic cultural heritage. The Kingdom of Armenia was the first state to adopt Christianity as its religion in the early years of the 4th century (the traditional date is 301).

"The conversion of Armenia to Christianity was probably the most crucial step in its history. It turned Armenia sharply away from its Iranian past and stamped it for centuries with an intrinsic character as clear to the native population as to those outside its borders, who identified Armenia almost at once as the first state to adopt Christianity."[1]

As a transcontinental country, Armenia may be considered to be in Asia and/or Europe. The UN classification of world regions places Armenia in Western Asia; the CIA World Factbook, National Geographic, and Encyclopædia Britannica also place Armenia in Asia. Conversely, numerous sources place Armenia in Europe such as the BBC, Oxford Reference Online, Merriam-Webster's Collegiate Dictionary (though it also places the historical Kingdom of Armenia in Asia), and www.worldatlas.com. Moreover, the Armenian government and the general population generally self-identify as European and a part of Europe. Armenia's former Minister of Foreign Affairs Vardan Oskanyan iterated recently that: "Armenia is in Europe. This is a fact, it's not a response to a question." Torben Holtze, former head of the European Commission's representation in Armenia and Georgia and Ambassador of the European Union with residence in Tbilisi, stated: "As a matter of principle, Armenia is a European country..."

Armenian territories were first united into an empire under Tigranes the Great (95–55 bc), whose extensive lands included parts of Syria and Iraq. Defeated by the Roman general Pompey, Armenia became a client state of the Roman Empire. Rome and Sasanian Persia partitioned Armenia, and after them Byzantium and the Ummayed and Abbasid caliphates controlled parts of Armenia. Armenia adopted Christianity at the beginning of the 4th century ad. The Seljuk Turks invaded Armenia in the 11th century, followed by Genghis Khan and Timur, leading to mass emigrations. Persia and Ottoman Turkey divided Armenia into eastern and western portions in the 16th–18th centuries. Russia took over Persia's holdings in 1828, and during the latter part of the 19th century both Russia and Turkey carried out harsh repression against nationalist activities among Armenians under their sway, leading to many deaths and mass emigrations. During World War I, Ottoman Turkey carried out forced resettlement and other harsh policies against Armenians, which Armenians term their national genocide. The historical experience remains a contentious issue in Armenian-Turkish relations. After the Bolshevik revolution in Russia in 1917, Armenia declared independence in May 1918. Armenia's population of 750,000 included as many as 300,000 who had survived flight from Turkey, and the heavy burden of independence among hostile neighbors (it clashed with Turkey, Georgia, and Azerbaijan) and an inhospitable climate may have led to as many as 150,000 deaths from famine and disease. Although the August 1920 Treaty of Sevres accorded international recognition of Armenian independence, the Russian Red Army conquered Armenia in November 1920. In 1922, Armenia was named part of a Transcaucasian Soviet Federated Socialist Republic, which encompassed lands now in Armenia, Azerbaijan, and Georgia, but it became a separate union republic in 1936. During the 1920s, Moscow drew internal borders in the Caucasus, which resulted in Nagorno-Karabakh (NK), then a mostly ethnic Armenian region, being incorporated into Azerbaijan, separated from the rest of Soviet Armenia by a few miles of Azerbaijani territory. NK was given the status of an "autonomous republic." Following a February 1988 call by the Nagorno-Karabakh (NK) legislature for unification with Armenia, the Armenian Supreme Soviet in December 1989 declared that NK, a largely ethnically Armenian-populated enclave within Azerbaijan, was part of Armenia. It also proclaimed Armenia's sovereignty over its land and resources. A popular referendum on independence was held in Armenia on 21 September 1991, in which 94% of the eligible population reportedly participated and which was approved by 99%. The Armenian legislature declared Armenia's independence two days later. Armenia received worldwide diplomatic recognition upon the collapse of the Soviet Union in December 1991.

Beginning in 1988, conflict engulfed NK, with Azerbaijan resisting the secession or independence of its enclave. Casualties were estimated at over 5,000. Emigration of 350,000 Armenians residing in Azerbaijan and over one million Azerbaijani residing in Armenia or NK followed pogroms in both states and conflict in NK and surrounding areas. In December 1991, a referendum in NK (boycotted by local Azerbaijani) approved NK's independence and a Supreme Soviet was elected, which on 6 January 1992, declared NK's independence and futilely appealed for world recognition. In 1993, Armenian forces gained control over NK and surrounding areas, occupying over 20% of Azerbaijani territory, which they continued to hold despite an Azerbaijani offensive in 1993–1994 that reportedly cost 6,000 Azeri casualties. A ceasefire has held fitfully since May 1994, but talks on a political settlement remain inconclusive. In the six-year period of conflict from 1988 to 1994, more than 35,000 people were killed and nearly one million have been left homeless. In November 1989, Levon Ter-Petrosyan became a leader of the Armenian National Movement (ANM), which grew out of the Karabakh Committee to push for Armenia's independence, and its chairman in March 1990. ANM and other nationalist deputies cooperated to elect him chairman of the Armenian Supreme Soviet in August 1990, inflicting a serious blow on the Armenian Communist Party. Following Armenia's declaration of independence, presidential elections were held on 16 October 1991. Ter-Petrosyan was supported by the ANM, winning 83% of the vote against six other candidates, including internationally famous dissident Paruir Hairikian of the Association for National Self-Determination and Sos Sarkisyan of the Armenian Revolutionary Federation (ARF; called Dashnaktsutyun in Armenian, meaning "federation"). Ter-Petrosyan was sworn into office on 11 November 1991, for a five-year term. His suspension of the activities of Armenian Revolutionary Federation party in December 1994 and a trial of its leaders raised concerns among some observers about possible setbacks to democratization. Elections to Armenia's unicameral 190-member National Assembly (legislature) were held in June 1995, at the same time as a referendum in which Armenian voters adopted the country's first post-Communist new constitution. International observers reported many campaign and voting irregularities. Observers from the Organization for Security and Cooperation in Europe (OSCE) judged the elections "free but not fair," in part because the main opposition party, the ARF, was banned from participation, the government dominated campaigning, the CEC appeared heavily pro-government in its decisions, and security officers constituted a chilling presence in many voting places. Voting irregularities reported on election day by the international observers included the violation of secret voting and pressure in voting places to cast a ballot for certain parties or candidates. In all, the Republic Bloc and other pro-government parties won 166 out of 190 seats, while the opposition won only 18 and independents four (two seats were undecided).[2]